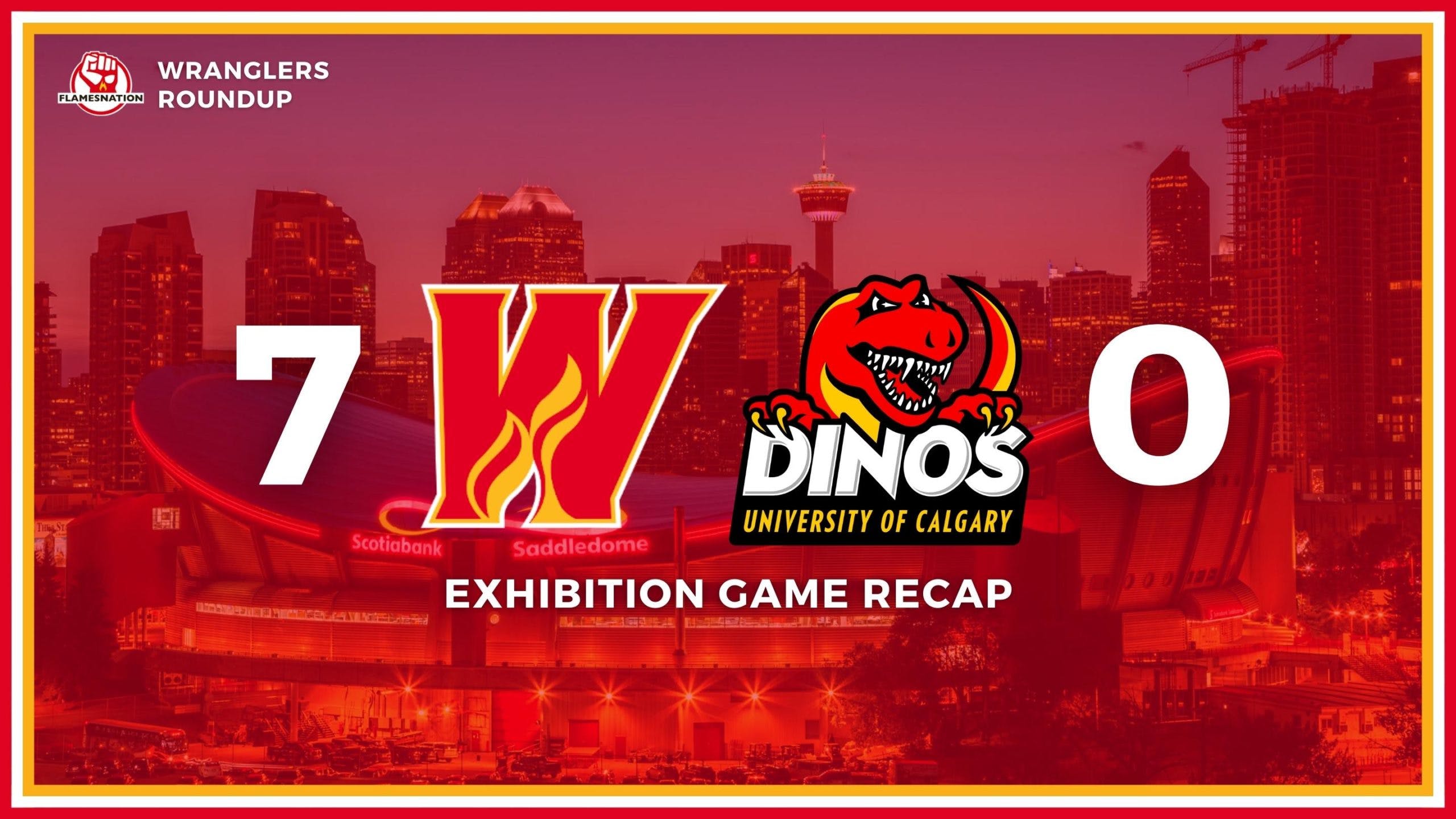 Photo credit: Graphic by Mike Gould
By Mike Gould
3 months ago
Comments
The Calgary Wranglers looked like a powerhouse on Tuesday night. Then again, it would’ve been more concerning if they didn’t.
While the University of Calgary Dinos are a perfectly respectable Canada West team (having posted a 2–2–0 record in league play to this point), they’re simply no match for one of the American Hockey League’s presumptive Calder Cup contenders.
In previous years, the Dinos men’s team faced off against the Calgary Flames’ prospects during September rookie camp. It made for a pretty even matchup — the Dinos typically iced an older lineup, whereas the NHL prospects had more skill but lacked experience.
Tuesday’s game was a blowout in every respect. Quite frankly, it might’ve been for the best that it was closed to fans. A smattering of people made their way down into the club seats while an invite-only fantasy draft event took place in the lower concourse lounge, and they witnessed a drubbing.
Advertisement
Ad
Advertisement
Ad
Simply put, the Wranglers are older, bigger, faster, and more skilled than the Dinos from top to bottom. It’s just the nature of the two levels of the sport. Those discrepancies did not allow for a particularly fair game, and that reality was reflected in both the shots and the score.
The Wranglers outshot the Dinos 22–3 in the first period, with U of C goaltender Carl Stankowski standing on his head to keep the game scoreless into the first intermission.
The second period was a different story. The Wranglers controlled the shots 16–1, scored four goals in less than two minutes (the poor PA announcer couldn’t keep up), and ultimately emerged with a commanding 5–0 lead.
Dustin Wolf started in goal for the Wranglers and exited the game at the 9:50 mark of the second period to make way for Oscar Dansk (a pre-planned switch). Wolf faced three shots in 29:50 on Tuesday and stopped, you guessed it, all three.
Advertisement
Ad
Advertisement
Ad
With the game all but decided, the Dinos showed some signs of pushback in the third period and ended up pinning the Wranglers in their defensive zone for a few extended sequences. But the Wranglers scored twice more in the final 20 minutes and ended up taking the exhibition contest by a 7–0 score.
“I think our guys were anxious to get out there. We’ve practiced a lot over the last couple weeks,” Wranglers head coach Mitch Love said after the game. “We’re real appreciative of the Dinos for coming here to play us and give us those opportunities. I thought there were times in the third where they had us hemmed in our own end of the ice.
“They didn’t have any quit and had good pushback.”
Connor Zary and Ben Jones both scored twice for the Wranglers on Wednesday, with Adam Klapka, Brett Sutter, and Cole Schwindt also finding the back of the net. Dansk ultimately made eight saves in relief of Wolf.
Advertisement
Ad
Advertisement
Ad

Check out all the highlights from tonight's exhibition victory! pic.twitter.com/pvnQ40B2sC

The Jakob Pelletier–Connor Zary–Matthew Phillips unit looked outstanding all evening, combining for 18 of the Wranglers’ 48 shots (with a team-high eight coming from Phillips).
On paper, it’s hard to come up with many potential AHL lines with more upside than that one for this season. Phillips played with Zary briefly at the start of the 2020–21 season and with Pelletier all of last year.
This year, Phillips — who finished ninth in the AHL with 68 points last year — will likely start the season with both recent first-round picks on his line.
“I think we did pretty well out there. They’re both really smart players,” Phillips said. “With [Zary], I think just kind of getting comfortable with each other still. It’s definitely going to come and I think we did a lot of good things.”
Advertisement
Ad
Advertisement
Ad

Head Coach Mitch Love spoke about what he saw from the team after their exhibition win! pic.twitter.com/cr0gLrTkTF

Matthew Phillips had an assist to help the Wranglers pick up the win tonight. Hear from him post-game! pic.twitter.com/Vgg9u7mVhn

Ben Jones had two goals and added an assist to help the Wranglers to an exhibition victory tonight. Hear his thoughts after the game. pic.twitter.com/5NQYAIVA6Q

The Wranglers will play host to the Coachella Valley Firebirds for their season opener at the Scotiabank Saddledome on Oct. 16. Opening puck-drop is slated for 1:00 p.m. and you can buy tickets on the Wranglers’ official website.