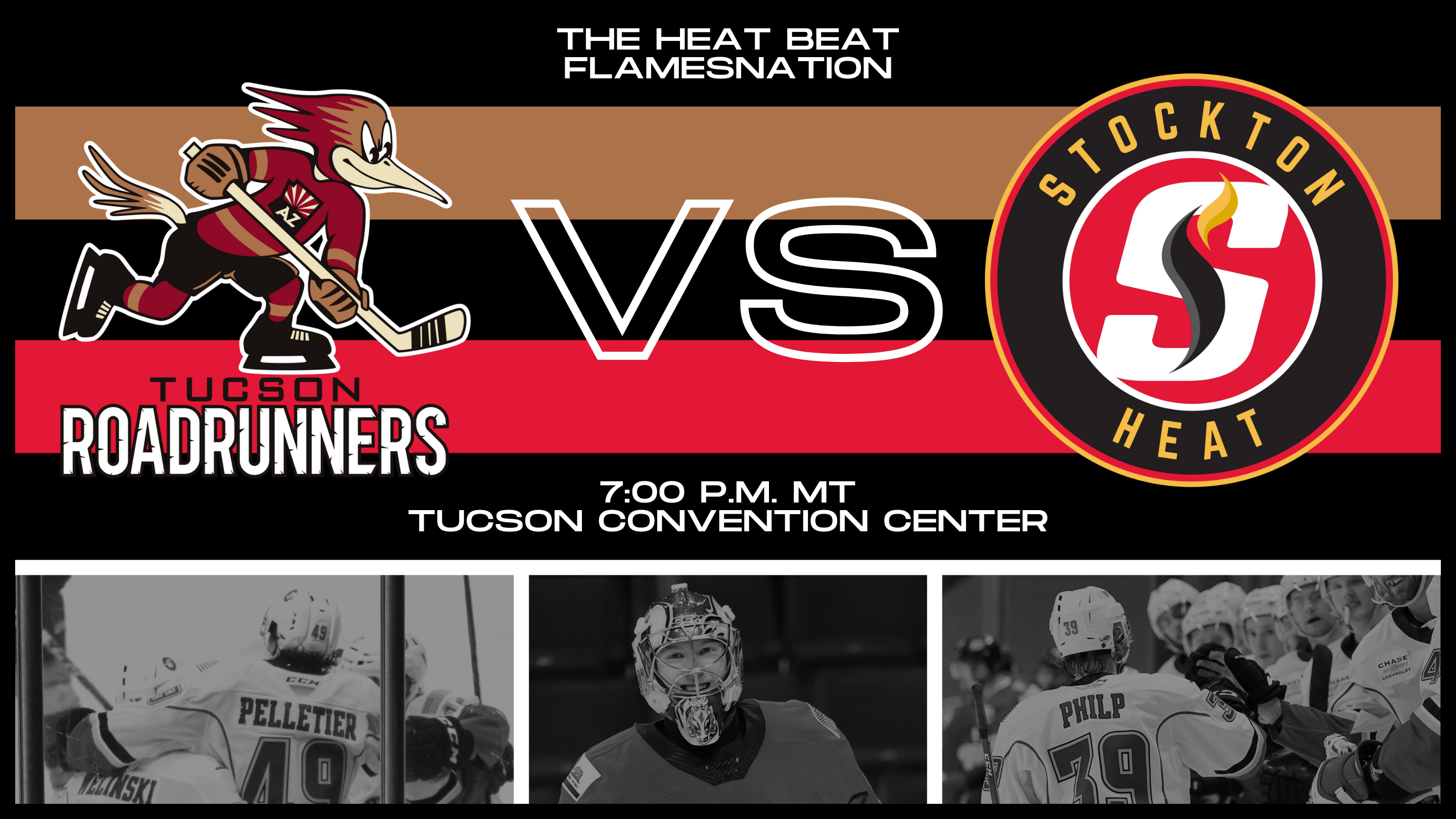 Photo credit: Graphic by Mike Gould
By Mike Gould
1 year ago
Comments
The Stockton Heat will look to rebound on Saturday after Friday’s heartbreaking 5–4 shootout loss to the Tucson Roadrunners.
Despite outshooting Tucson 51–31 through regulation and overtime, the Heat entered the skills competition knotted at four goals apiece with their opponents. Stockton goaltender @Adam Werner had a game to forget, making just 21 saves on 25 shots in regulation while his counterpart, @Ivan Prosvetov, stopped 45 of 49.
With the loss, Werner fell to 4–2–1 on the season with an .880 save percentage. Conversely, Saturday’s projected starter, @Dustin Wolf, is still undefeated in regulation this season with a 10–0–2 line. Wolf’s .937 save percentage ranks second in the entire American Hockey League.
Aside from their goaltending, the Heat played a strong game on Friday. @Matthew Phillips and @Jakob Pelletier each posted two goals and an assist while @Connor Mackey continued his recent hot streak with a pair of helpers. Mackey has now recorded multiple points in four consecutive games.
Advertisement
Ad
Advertisement
Ad
Oddly, Stockton head coach Mitch Love opted to leave both Phillips and Pelletier on the bench in the shootout. @Justin Kirkland scored in the first round; @Glenn Gawdin, @Martin Pospisil, and @Luke Philp all failed to convert en route to the shootout loss.
@Juuso Valimaki did not play for Stockton on Friday. He’s expected to draw back into the lineup for Saturday’s game:

– Juuso Valimaki (immigration paperwork) will not play tonight, but will travel and play tomorrow vs Tucson .

Stockton — It’s not time to fret about @Connor Zary‘s production (or lack thereof). Yes, the 20-year-old centre only has three points (all goals) in 11 games after starting last season with seven points in nine games. Here’s something else to consider: Zary is currently playing centre as a professional for the first time. He just recovered from a broken foot. Last season, his linemates were @Adam Ruzicka and @Matthew Phillips. Zary’s production is entirely reasonable for what he’s been through this year — and given what he’s currently trying to do for the first time at the pro level.
Advertisement
Ad
Advertisement
Ad
Tucson — @Juuso Valimaki’s old friend @Matias Maccelli currently leads the Roadrunners with 19 points in his first 17 games. Valimaki and Maccelli played together to start last season on a stacked Ilves Tampere squad, on which Juuso tallied 19 points in 19 games before returning to North America. Maccelli played out the balance of the season with Ilves, scoring 39 points in 51 games, before making his debut with the Roadrunners to start this season. The Coyotes originally selected the 21-year-old left wing in the fourth round of the 2019 draft.

Saturday’s game in Tucson will be broadcast on AHL TV (subscription required) and on Spreaker (audio only), with the opening puck-drop set for 7:00 p.m. MT.
FlamesNation contributor Paige Siewert will provide live game updates on her Twitter account. Additionally, you’ll be able to follow along at TheAHL.com.
Advertisement
Ad
Advertisement
Ad