Advertisement
Ad
How could the Flames fit Jack Eichel under the cap ceiling? 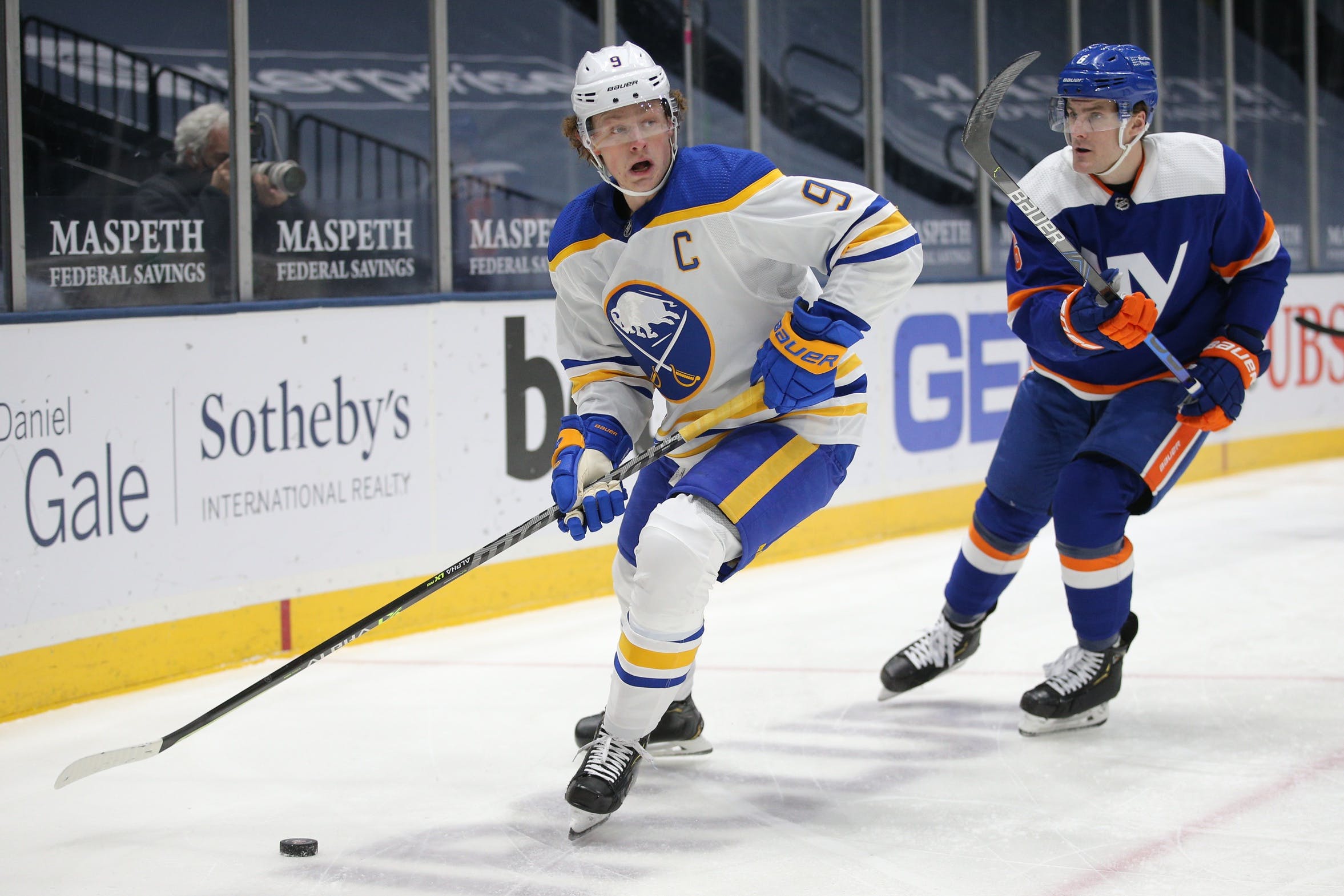 Photo credit: Brad Penner-USA TODAY Sports
By Ryan Pike
1 year ago
Comments
Everyone and their dog has been chattering of late about the possibility, however remote, of the Calgary Flames acquiring Jack Eichel. We’ve discussed the pros and cons of it recently, but let’s get into the brass tacks of it all: if the Flames really wanted to trade for Eichel, could they do so and still field a cap compliant roster?
The scuttlebutt is that the Buffalo Sabres want four assets that are the equivalent of first round picks and are skewing towards young players, particularly since they seem to be in the midst of their umpteenth teardown. And since the Flames wouldn’t be acquiring Eichel just to remain among the NHL’s middleweights, presumably they’d like to remove as few pieces from their roster as possible in the process.
So here’s a quick sketch of the Flames roster as is, with a few assumptions made here and there for restricted free agents and depth players:
Johnny Gaudreau [$6.375 million] – Elias Lindholm [$4.85 million] – Matthew Tkachuk [$7 million]
Andrew Mangiapane [$2.425 million] – Sean Monahan [$6.375 million] – Blake Coleman [$4.9 million]
Dillon Dube [$2 million (estimate)] – Mikael Backlund [$5.35 million] – Tyler Pitlick [$1.75 million]
Milan Lucic [$5.25 million] – Glenn Gawdin [$0.75 million (estimate)] – Trevor Lewis [$0.8 million]
Advertisement
Ad
Advertisement
Ad
Noah Hanifin [$4.95 million] – Chris Tanev [$4.5 million]
Nikita Zadorov [$3 million (estimate)] – Rasmus Andersson [$4.55 million]
Juuso Valimaki [$1.5 million (estimate)] – Andy Welinski or Oliver Kylington [$0.75 million]
Jacob Markstrom [$6 million] / Daniel Vladar [$0.75 million]
(Troy Brouwer’s buyout eats up another $1.5 million, while Brett Ritchie’s one-way deal is buried in the minors and doesn’t count against the cap in this scenario.)
All-told, this bare bones roster costs roughly $75.325 million against the cap, leaving $6.175 million free. This also involves the Flames carrying absolutely zero extra bodies during the season.
Advertisement
Ad
Advertisement
Ad
Eichel’s cap hit is $10 million, meaning the Flames would need to move out $3.825 million in existing cap commitments – either in that trade or in another move – in order to acquire Eichel and remain cap compliant. In a lot of trade proposals on social media I’ve seen Sean Monahan’s name bandied around, and it makes a lot of sense in the lens of he’s a centre and so is Eichel, and in the sense of it would almost need to be Monahan to make the cap math work. The other possibilities that would make the math work are either players the Flames wouldn’t readily move (looking at you, Elias Lindholm) or that the Sabres probably wouldn’t want (looking at you, Milan Lucic and Mikael Backlund). Or the Flames could try to move a pair of young players with slightly lower salaries, such as Andrew Mangiapane or Dillon Dube, but that would clear out a lot of the team’s young up-and-coming depth on the wings.
Even if the Flames were confident in Eichel’s long-term health and his ability to bounce back from whatever procedure he chooses to undergo to fix his neck, the cap math behind a trade for a player of his magnitude is pretty substantial. You couldn’t just sent picks and prospects to Buffalo to land Eichel: the Flames would need to send a roster player, and one with a hefty cap hit, out the door to make the balance sheet even out.
Advertisement
Ad
Advertisement
Ad