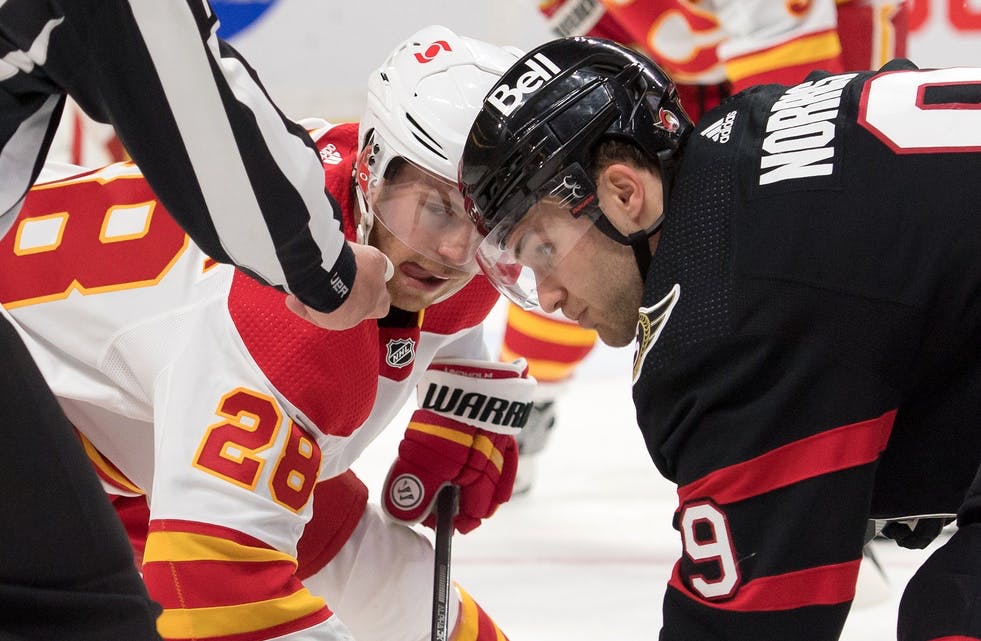 Photo credit: Marc DesRosiers-USA TODAY Sports
By Ryan Pike
1 year ago
Comments
The Calgary Flames (7-3-4, 18 points) are in need of a win, and they may be in a pretty decent spot to get one when they visit the Ottawa Senators (4-9-1, 9 points) in Kanata, an Ottawa suburb where their arena happens to be. The Senators played yesterday and are in the midst of a slew of injuries and positive COVID-19 tests. It’s the most scheduled schedule win that was ever scheduled. Can the Flames make it an actual win?
The puck drops just after 3 p.m. MT and you can catch the action on television via Sportsnet West or on radio via Sportsnet 960 The Fan (with Derek Wills and Peter Loubardias).

Projected lines via Daily Faceoff:
Gaudreau – Lindholm – Tkachuk
Dube – Backlund – Lewis
Coleman – Monahan – Mangiapane
Lucic – Richardson – Pitlick
Advertisement
Ad
Advertisement
Ad
Hanifin – Andersson
Kylington – Tanev
Zadorov – Gudbranson
Update: Dan Vladar starts against Ottawa. Tyler Pitlick is out with a minor injury, so Walker Duehr debuts.
After splitting the back-to-back in Toronto and Montreal, the expectation is Jacob Markström starts for the Flames, backed up by Dan Vladar. The extras are Jusso Välimäki, Walker Duehr and Michael Stone.
The Flames have played fairly well lately, but have made key gaffes at key times and seen their percentages on both sides of the puck drop a little bit. The result has been they’ve lost three in a row and five out of their last six games. They have one out of a possible four points to begin their seven game road trip.
They need a win, and this is the type of game that good teams – playoff teams – usually end up winning.
Advertisement
Ad
Advertisement
Ad

Yesterday’s lines via Daily Faceoff:
Tkachuk – Norris – Ennis
Stützle – Pinto – Sokolov
Kelly – Paul – Shaw
Sanford – Tierney – Sabourin
Chabot – Thomson
Del Zotto – Zub
Heatherington – Bernard-Docker
Jonas Gustavsson started against Pittsburgh, so presumably the Flames draw Anton Forsberg for today’s game. The extras last night for Ottawa were Scott Sabourin and Andrew Agozzino, while Nikita Zaitsev was out pending another COVID test result. He could slot in, but he might not. Shane Pinto returned from injury last night but left after seemingly re-injuring himself.
The Senators are a scrappy, well-coached team. But they played last night. And they’re struck by a bunch of injuries. And they’re in the midst of a COVID outbreak. This is a game the Flames probably should win, and arguably need to win to regain some lost standings momentum from the last couple of weeks.
Advertisement
Ad
Advertisement
Ad

The Flames played Ottawa nine times last season, with the Flames winning just three times. Their season series with the Senators was arguably the factor that caused them to miss the playoffs (and probably cost Geoff Ward his head coaching gig).