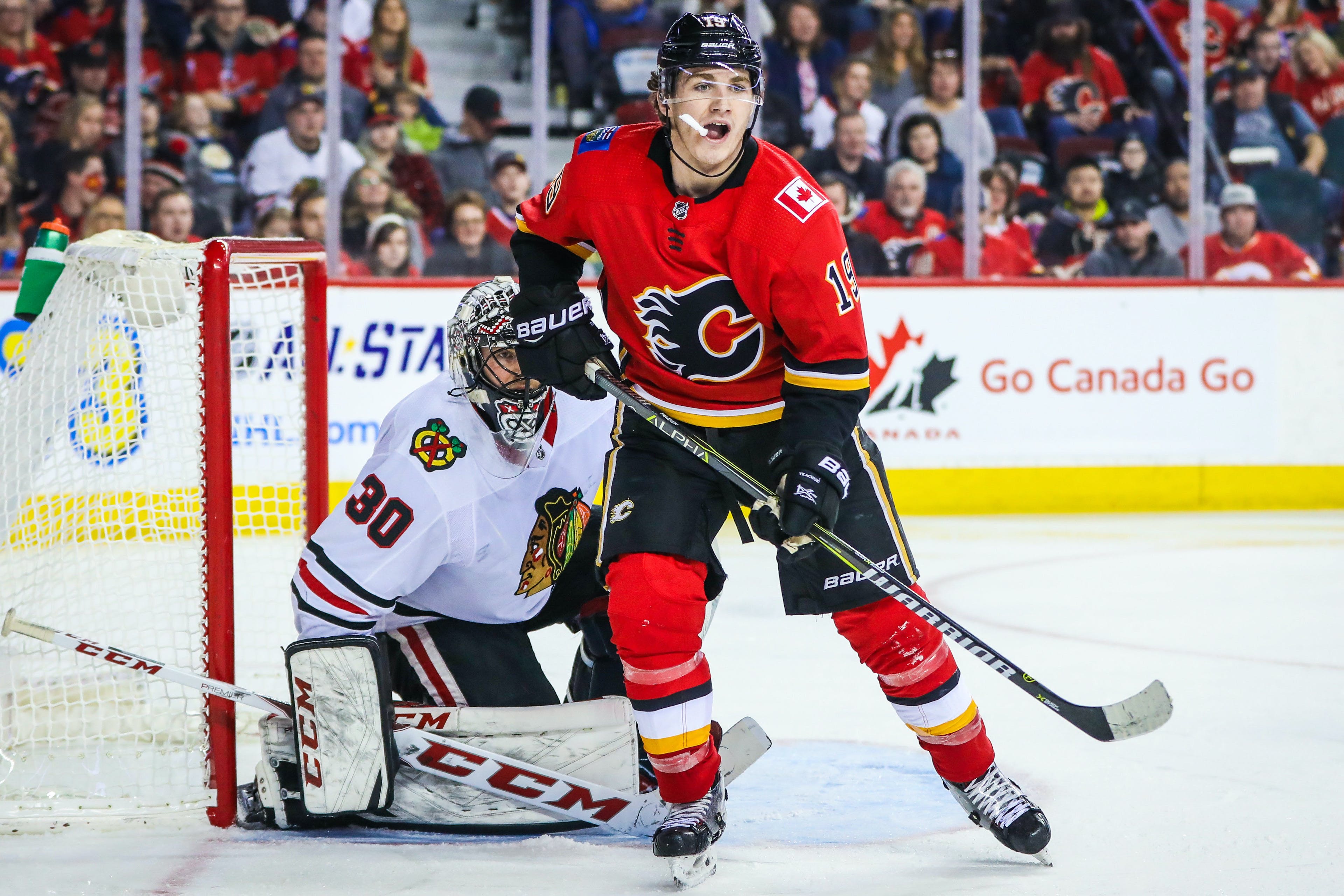 Photo credit: Sergei Belski-USA TODAY Sports
By Ryan Pike
1 year ago
Comments
After seven games away from home, the Calgary Flames (11-3-5, 27 points) return to the palatial confines of the Scotiabank Saddledome! They host the Chicago Blackhawks (6-10-2, 14 points), who’re in the midst of a western swing.
The puck drops just after 7 p.m. MT and you can catch the action on television via Sportsnet One or on radio via Sportsnet 960 The Fan.

Yesterday’s lines via Daily Faceoff:
Gaudreau – Lindholm – Tkachuk
Coleman – Backlund – Mangiapane
Dube – Monahan – Pitlick
Lucic – Richardson – Lewis
Hanifin – Andersson
Kylington – Tanev
Zadorov – Gudbranson
Jacob Markström starts for the Flames, backed up by Dan Vladar. The projected extras are Michael Stone, Juuso Välimäki and Walker Duehr. This is the lineup that played in six out of the seven road games, in this precise configuration, so it does make a bit of sense to go back to this after Sunday’s win. (A bit of a shame that Välimäki didn’t get more of a look.)
The Flames are a team with some flaws – the third line hasn’t moved the needle much and the third pairing is primarily built just to get the puck out of their own zone – but they’ve managed to embrace Darryl Sutter’s structured style and they’re one of the most effective teams in the NHL. They’re nearly through a quarter of their schedule and arguably have the worst of their travel behind them, and they’ve managed to accumulate a lot of standings points.
Advertisement
Ad
Advertisement
Ad
This may be what the Flames are this season.

Yesterday’s lines via Daily Faceoff:
Debrincat – Dach – Kane
Hagel – Toews – Strome
Hardman – Borgstrom – Kubalik
Johnson – Carpenter – Khaira
de Haan – S.Jones
McCabe – Murphy
Stillman – Gustafsson
Coming off a shutout in Vancouver, Marc-Andre Fleury starts and is backed up by Kevin Lankinen. The projected extras are Adam Gaudette, Philipp Kurashev and Wyatt Kalynuk. Riley Stillman left Sunday’s game with an injury and is now on the injury reserve, with Kalynuk taking his roster spot on a recall from the excellently-named Rockford Ice Hogs.
The Blackhawks have been a lot this season. They’ve struggled on the ice. They’ve dealt with a lot of turmoil off the ice. They’ve fired their coach. They accepted their GM’s resignation. They have an interim coach and GM right now. They’re a team in transition, and hopefully they eventually figure out just what the heck they want to be.
Advertisement
Ad
Advertisement
Ad

The Flames are without Brett Ritchie.
The Blackhawks are without MacKenzie Entwhistle, Riley Stillman, Tyler Johnson and Andrew Shaw.

The last time the Flames played Chicago, back in February 2020, Chicago won 8-4.