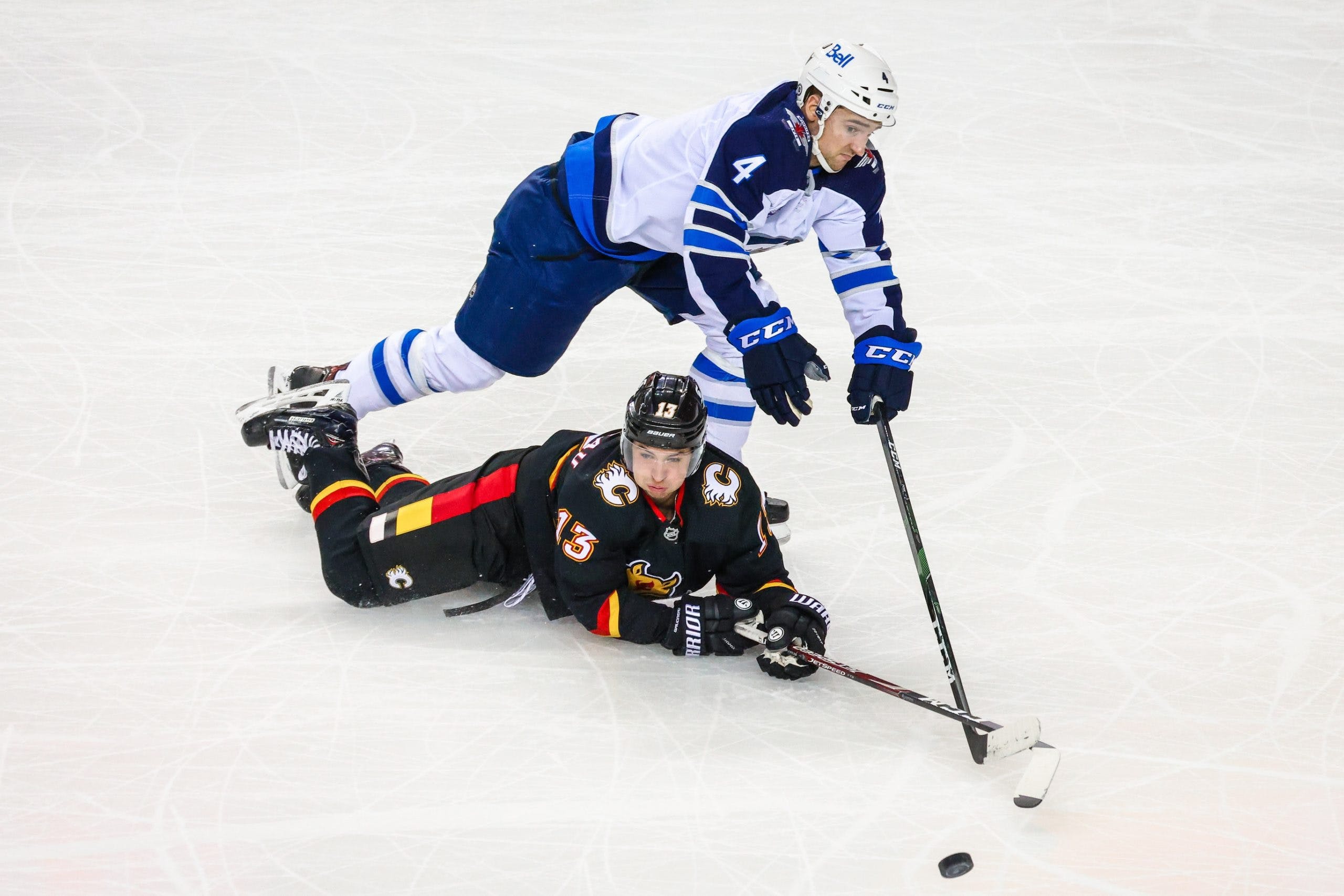 Photo credit: Sergei Belski-USA TODAY Sports
By Ryan Pike
1 year ago
Comments
Just 24 hours after picking up a loss to the same club, the Calgary Flames (15-17-3, 33 points) are back in action against the Winnipeg Jets (21-11-2, 44 points)! The Flames were decent on Friday night, but key gaffes at key moments led to their fourth consecutive loss. Can they get back to the win column tonight with their playoff hopes dwindling?
The action starts at 8 p.m. MT on CBC and Sportsnet’s national feed and Sportsnet 960 The Fan!
For a view from the other side, check out our frenemies over at JetsNation!

Projected lines, via Daily Faceoff:
Gaudreau – Monahan – Lindholm
Tkachuk – Backlund – Mangiapane
Lucic – Bennett – Ritchie
Nordstrom – Ryan – Leivo
Giordano – Andersson
Hanifin – Tanev
Nesterov – Stone
David Rittich starts for the Flames, backed up by Jacob Markstrom – and you never know, it could be one of the final Flames appearances for Big Save Dave with the trade deadline looming.

Optional morning skate. Looks like Dillon Dube and Juuso Valimaki coming out of the lineup tonight vs. Winnipeg.

The healthy extra bodies with the club are Louis Domingue, Michael Stone, Alex Petrovic, Buddy Robinson, Zac Rinaldo, Oliver Kylington and Dominik Simon. It sounds like Brett Ritchie returns from injury tonight.
There’s no dressing it up, folks: the Flames need wins. Moral victories or good periods or nice efforts won’t cut it. They need actual standings wins, and many of them. And a time machine to go back and replay some of their previous losses would be helpful, too.
Advertisement
Ad
Advertisement
Ad
It’s Johnny Gaudreau’s 500th career game!

“Hopefully he has more energy than his 499th game.” #Flames

Projected lines, via Daily Faceoff:
Stastny – Scheifele – Wheeler
Connor – Dubois – Ehlers
Copp – Lowry – Appleton
Perreault – Thompson – Lewis
Morrissey – Poolman
Forbort – Pionk
Stanley – DeMelo
Don’t expect many, if any, changes from the Jets’ lineup from last night. Laurent Brossoit starts again for the Jets, backed up by Connor Hellebuyck. The active extras are Jansen Harkins and Sami Niku. The taxi squad is Eric Comrie, Nelson Nogier, Ville Heinola, Joona Luota and Dominic Toninato.
The Jets are hoping to stay the course: play well, defend well, and play a patient game that clogs up the middle of the ice and forces the Flames to battle their way into the high-rent district in front of the net. If they stick with the program, they could get another W out of Calgary.
Advertisement
Ad
Advertisement
Ad

If you peruse most standings projections, it becomes apparent that 65 points probably gets you into the playoffs. That’s a 32-23-1 record, or thereabouts, or a .580 points percentage.
The Flames have a 15-17-3 record, 33 points, and a .471 points percentage. To hit 65 points, they need 32 points in the remaining 21 games, the equivalent of a .762 points percentage.

The Flames have won two of their first six games with the Jets, capturing five of a possible 12 points in the process. (One of their four losses was in overtime.)