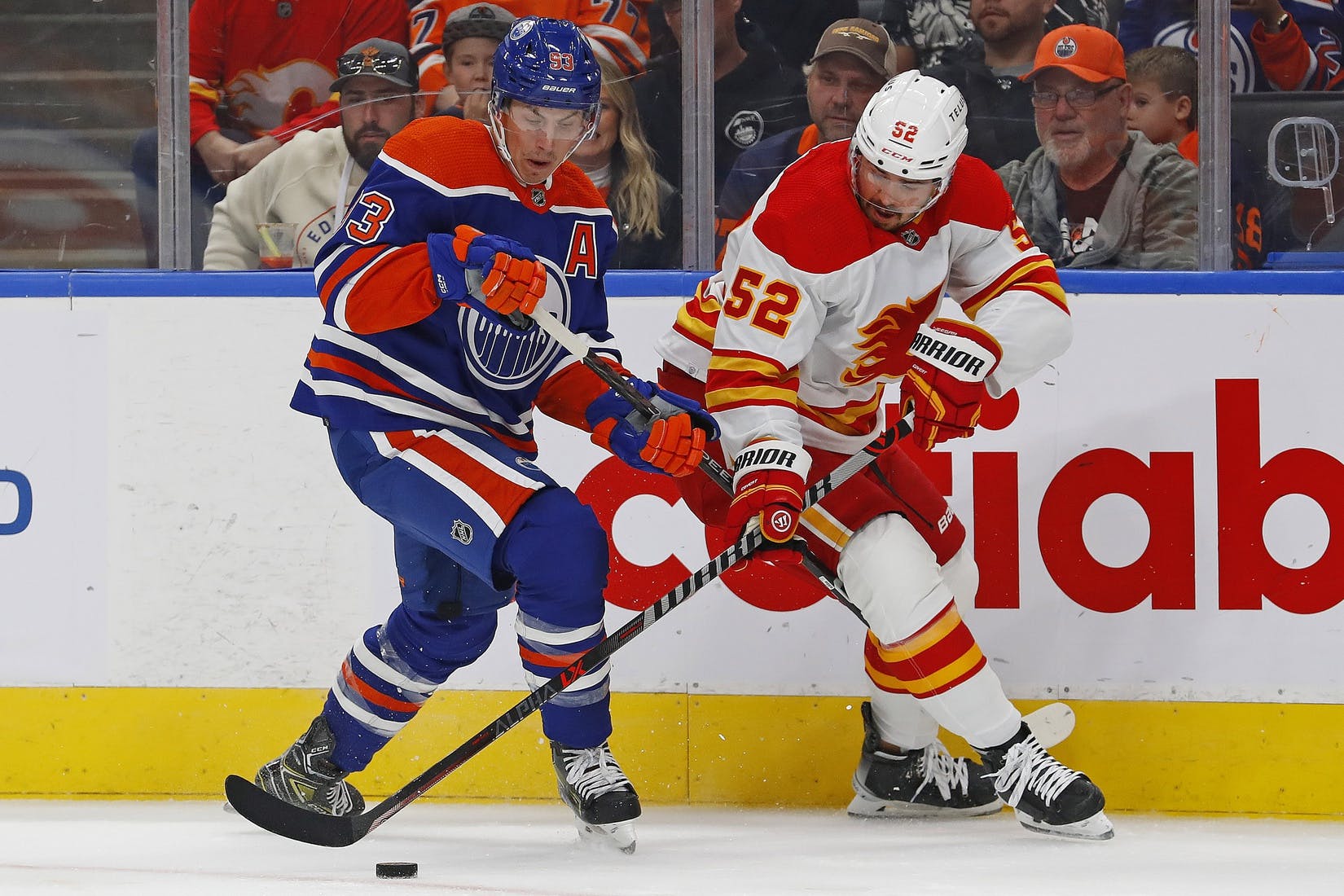 Photo credit: Perry Nelson-USA TODAY Sports
By Ryan Pike
1 month ago
Comments
The first Battle of Alberta of the 2022-23 season is in the books, and the Calgary Flames drew first blood with a 4-3 victory over the Edmonton Oilers at Rogers Place.
Five Flames were making their first-ever appearance in a Battle of Alberta. Here’s a look at how they fared in their debuts.

Playing on the top line with Tyler Toffoli and Elias Lindholm, Huberdeau’s line saw a lot of Darnell Nurse all evening – he played 16:18 overall, with Nurse against him for 12:04, per Natural Stat Trick – and faced a steady diet of the Oilers’ top six. Huberdeau had a solid if quiet evening. He generated one scoring chance and one high-danger chance at five-on-five.
Huberdeau had the puck on his stick quite a bit in his spot on the left side of the power play, but he couldn’t get shots off fast enough to get dangerous scoring chances in that situation.
Advertisement
Ad
Advertisement
Ad

Kadri got a lot of attention from the Oilers’ top guns all evening, seeing a lot of Leon Draisaitl, Connor McDavid and Evander Kane during his evening. He played 14:44 and had a goal and an assist, along with generating two scoring chances and one high-danger chance at five-on-five.

The Kadri call in Punjabi is something to die for 🔥 @HkyNightPunjabi
pic.twitter.com/xRyFmTlG61

Kadri was challenged at the face-off dot, though, going 5-for-14 and winning just one of eight draws he took against Draisaitl head-to-head.

Anchoring the fourth line, Rooney performed pretty well. He was 5-for-7 in face-offs, with one face-off win leading directly to Michael Stone’s goal. Rooney’s trio saw a lot of the Oilers’ lesser lights – the fourth line and the third pairing – and they made the most of it for much of the evening. Rooney was credited with one scoring chance and one high-danger chance at-five-on-five.
Advertisement
Ad
Advertisement
Ad

MICHAEL STONE!!! Launches an absolute howitzer from the point to make it 2-1 🔥🔥 #Flames pic.twitter.com/6HpDyjKrJa

Weegar got an introduction into the Battle of Alberta with a lot of time against Kane, Draisaitl and McDavid during the evening. On one hand, he generated two scoring chances and one high-danger chance at five-on-five. On the other hand, he ended up being a minus player on the night.

In his first game of the season, Vladar was rock-solid, making 26 saves on 29 shots. If you look at the three goals he gave up, one was a cannon from Cody Ceci after a defensive breakdown, one was a superb McDavid finish on the power play, and one was a really nice play by Ryan Murray and Ryan McLeod that led to an in-close chip shot. Aside from maybe trying to get a glove on Ceci’s blast, we’re not sure what else the netminder could’ve done.
Advertisement
Ad
Advertisement
Ad

Dan Vladar makes a save on Leon Draisaitl in the 3rd period #EDMvsCGY #LetsGoOilers #Flames pic.twitter.com/VbbzgaJjoO

And he was really good late in this game when things got scrambly and the Flames needed him to shut the door to avoid overtime.
Which of the new faces impressed you the most on Saturday against Edmonton? Let us know in the comments!