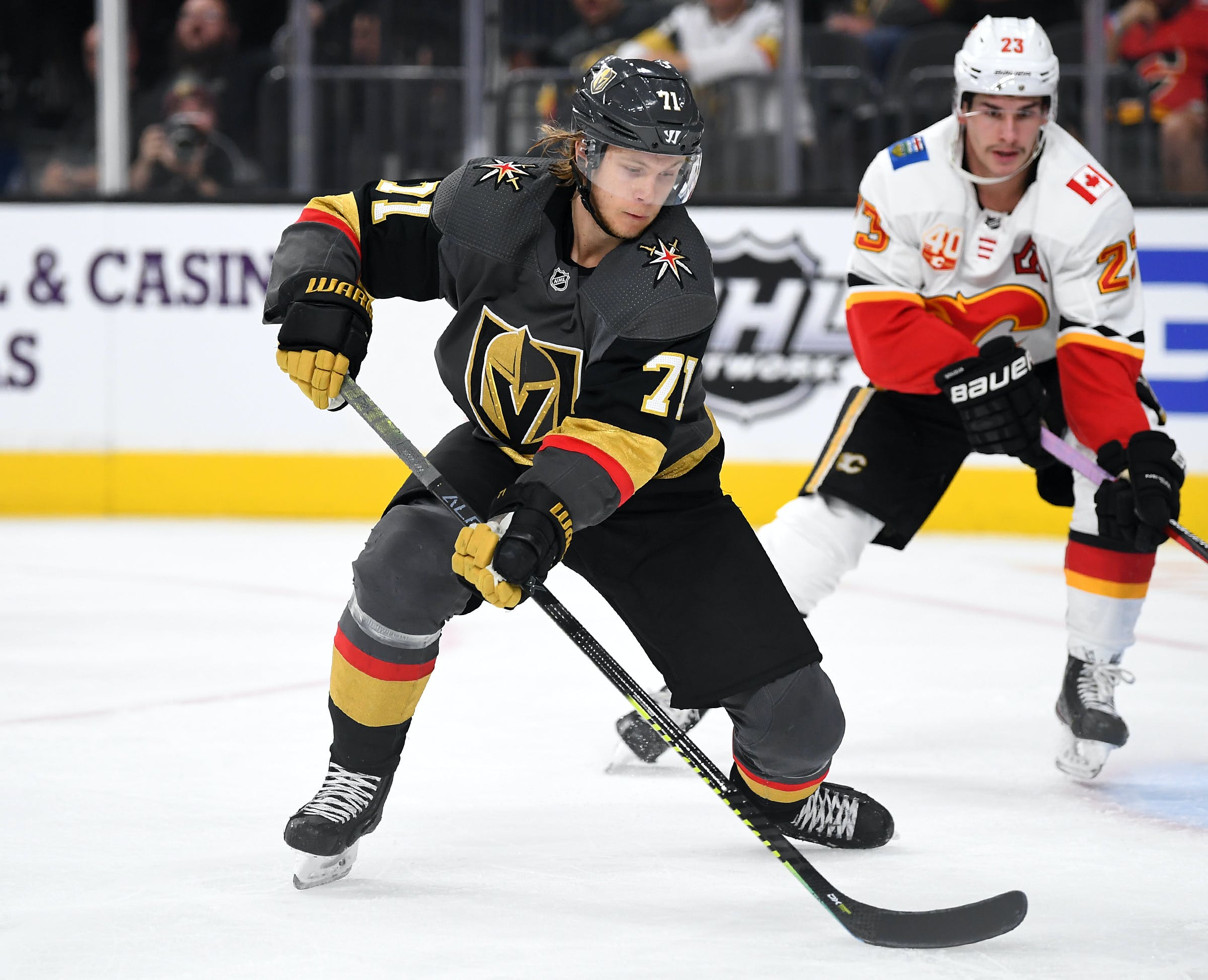 Photo credit: Stephen R. Sylvanie-USA TODAY Sports
By Shane Stevenson
1 year ago
Comments
After back-to-back wins in the heart of California the Flames head into the newest building that gives them grief in the Vegas Golden Knights Fortress. The Calgary Flames (15-4-5, 35 points) take on the Vegas Golden Knights (13-10-0, 26 points) in a division rivalry game on a Sunday night.
The game gets underway at 8PM Mountain standard time, it will be on SN One, SN East, SN Ontario, SN Pacific, and SN960 The Fan radio station.

Projected lineups via Daily Faceoff
Gaudreau – Lindholm – Tkachuk
Lucic – Backlund – Mangiapane
Coleman – Monahan – Lewis
Dubé – Richardson – Pitlick/Ružička
Hanifin – Andersson
Kylington – Tanev
Zadorov – Gudbranson
Adam Ružička practiced in Tyler Pitlick’s spot on Saturday, so it is possible he may be going for the first time this season against VGK. The line of Dubé – Richardson – Pitlick were all benched for the entirety of the third period + overtime against Anaheim, all playing under 6 mins TOI at 5v5.
The Flames have gone with Dan Vladar after wins before on road trips, but it was typically on the back of an extremely strong performance. After allowing 3 goals it would not surprise me if they turned back to Markstrom – especially in a divisional game as important as one against Vegas.
Advertisement
Ad
Advertisement
Ad
The Flames top line has been able to dictate play in the vast majority of their games to date, it’s time to see if a depleted Vegas lineup can contain them.

Projected lineups via Daily Faceoff
Pacioretty – Stephenson – Stone
Marchessault – Roy – Smith
Janmark – Kolesar – Dadonov
Carrier – Brooks – Amadio
Hague – Pietrangelo
Theodore – Whitecloud
McNabb – Coughlan
It’s projected that Robin Lehner will get the start for Vegas, and you can never count him out for a quality game.
Vegas themselves are coming off a 7-1 shelling of the lowly Arizona Coyotes, so they may be feeling very positive about themselves. They had lost in regulation to the Ducks and Oilers previously before that – so it is possible the pace Calgary plays at might be able to overwhelm them. The Golden Knights have a clear weakness up the middle and the Flames may be able to take advantage of the bottom-6 because of it.
Advertisement
Ad
Advertisement
Ad
Oh and he may be skating again, but you will not be pained with any on-ice play from Jack Eichel, although I can’t promise the broadcast won’t mention it and cause Flames fans pain.

Brett Ritchie continues to remain injured for Calgary, we’ll keep an eye on Pitlick to see if he’s okay to go as well.
Vegas are without Jack Eichel, Nolan Patrick, and William Karlsson… like we said, weak up the middle.

When we last met

March 8th 2020 was the last time they played each other, resulting in a Vegas 5-3 win. Calgary holds an all-time record against Vegas of 3-8-0 against Vegas, and are 0-5-0 in the Fortress.

GAME NOTES BROUGHT TO YOU BY DAILY FACEOFF