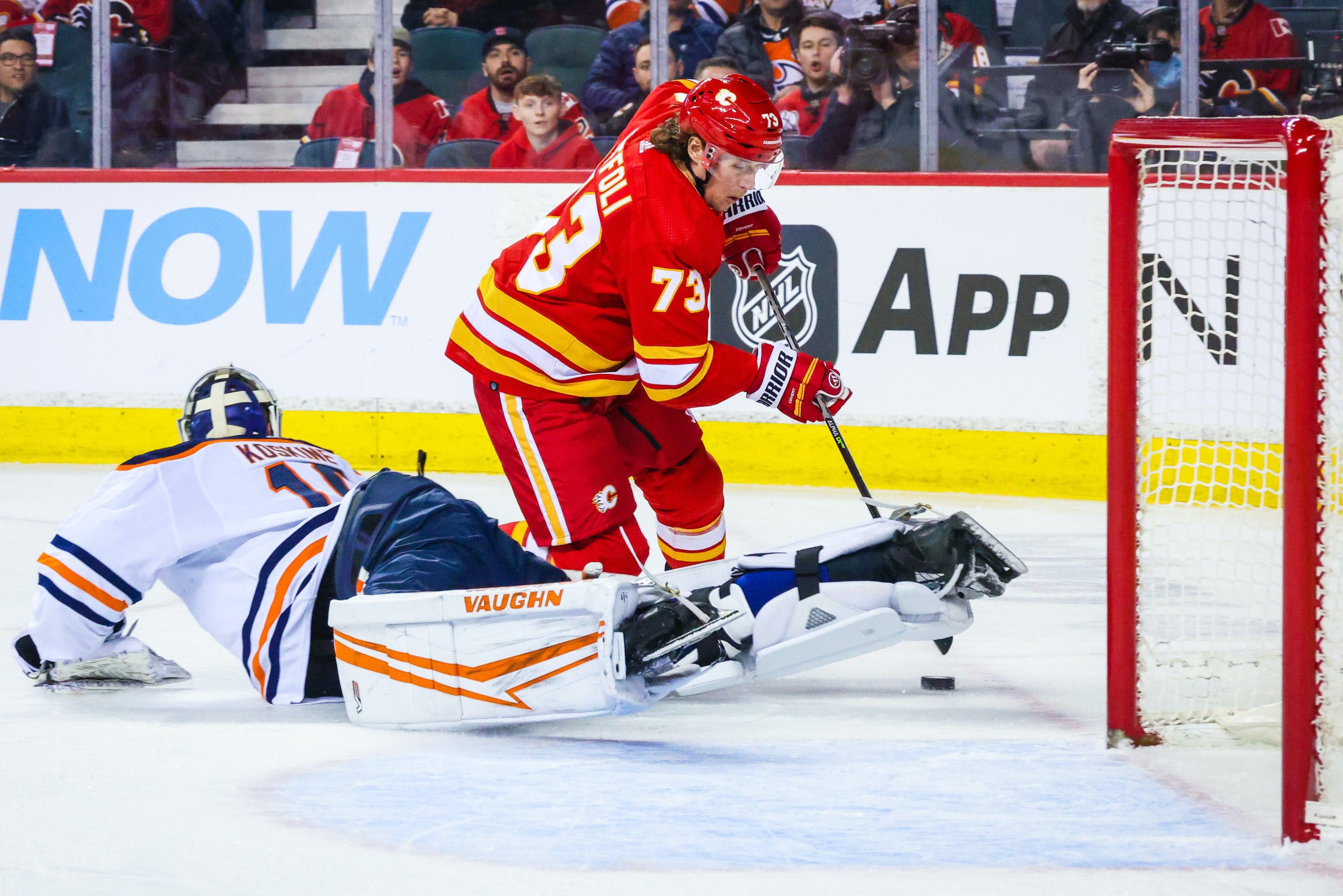 Photo credit: Sergei Belski-USA TODAY Sports
By Ryan Pike
10 months ago
Comments
It’s Saturday night! It’s the Saddledome! And it’s the fourth and final regular season instalment of the Battle of Alberta between the Calgary Flames (39-17-8, 86 points) and the Edmonton Oilers (36-24-5, 77 points). The Flames aim to cement their stranglehold on the Pacific Division crown, while the Oilers are hoping to both play spoiler and cement their own playoff aspirations. This should be a lot of fun, folks.
The puck drops just after 8 p.m. MT. Catch all the action on CBC, Sportsnet’s national feed and City TV, or Sportsnet 960 The Fan!
For a view from the other side, go check out our colleagues at OilersNation!

Projected lines via Daily Faceoff:
@Johnny Gaudreau – @Elias Lindholm – @Matthew Tkachuk
@Dillon Dube – @Mikael Backlund – @Tyler Toffoli
@Andrew Mangiapane – @Calle Jarnkrok – @Blake Coleman
@Milan Lucic – @Ryan Carpenter – @Trevor Lewis
@Noah Hanifin – @Rasmus Andersson
@Oliver Kylington – @Chris Tanev
@Nikita Zadorov – @Erik Gudbranson
Based on reports from Pat Steinberg from an optional morning skate it appears that @Jacob Markstrom starts both halves of this back-to-back set, backed up by @Daniel Vladar. The projected extras are @Michael Stone, @Brett Ritchie and @Sean Monahan, with @Ryan Carpenter making his Flames debut after being acquired at the trade deadline.
Advertisement
Ad
Advertisement
Ad
The star of Friday’s game against Arizona was @Johnny Gaudreau, who had three points – including his 30th goal of the season and 200th of his career. He was reunited with @Elias Lindholm and @Matthew Tkachuk in the second period, and the results were excellent. Keep an eye on them.
On the other hand, the Flames were still a tad leaky defensively. One of Arizona’s goals came off a bad turnover by @Nikita Zadorov in the defensive zone, and the other one came off a bit of soft defensive coverage that allowed the Coyotes defender to sneak in as the trailer off the rush and get a good shot off. If the Flames lack strong defensive details against Edmonton, it’s not going to be a good night for them.

The Flames are healthy.
The Oilers are without Oscar Klefbom.

This is the fourth and final regular season meeting between these two teams. So far, the home team has one every instalment this season.