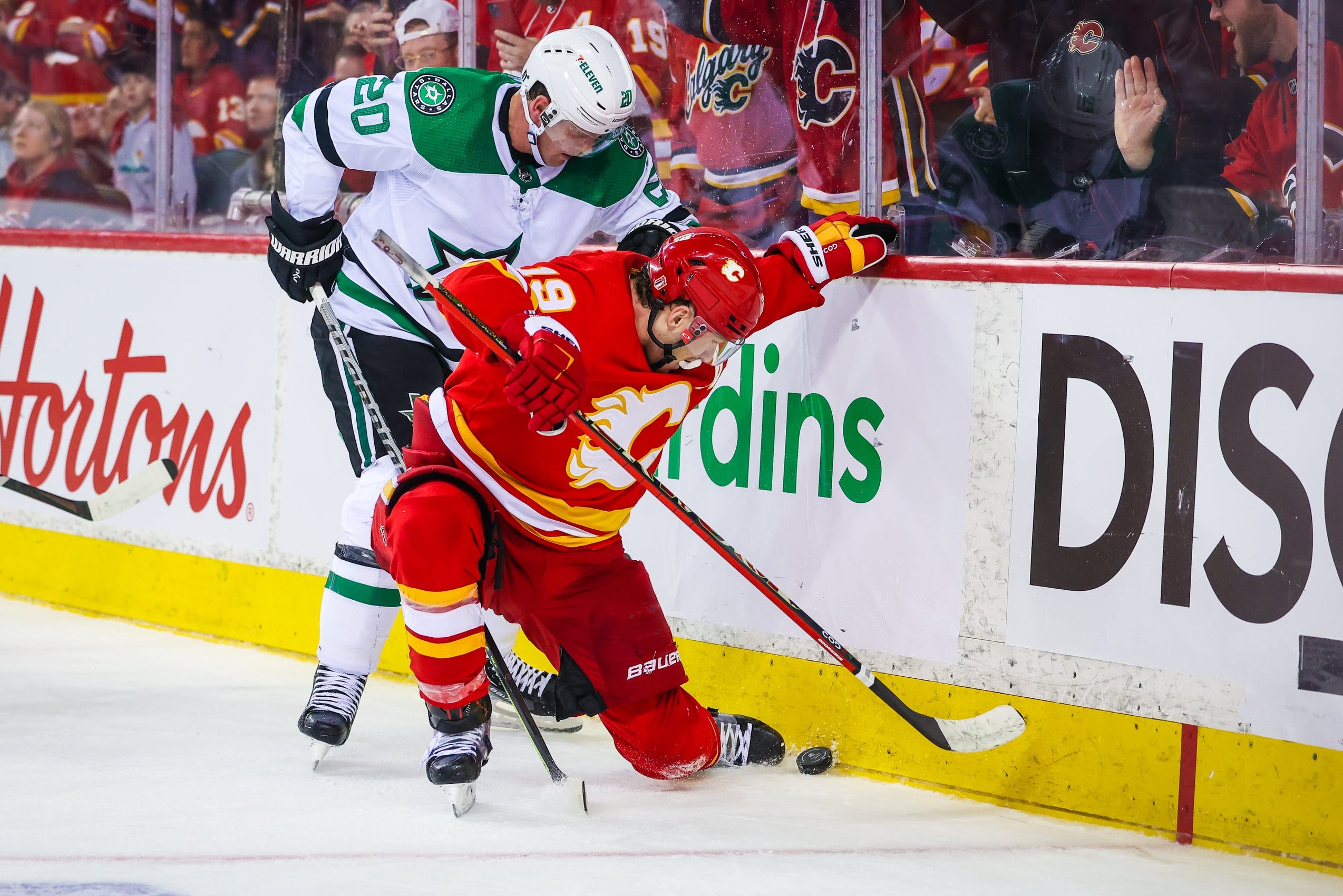 Photo credit: Sergei Belski-USA TODAY Sports
By Ryan Pike
8 months ago
Comments
After a superb 82 game regular season and six hard-fought playoff games, the continuation of the playoff push for the Calgary Flames (3-3; 1st place, Pacific Division) comes down to a decisive Game 7 on Sunday night at the Saddledome. The Dallas Stars (3-3; 1st wildcard seed, Western Conference) are in town, hoping to advance to the second round. The Flames are also hoping to advance to the second round. One team will move on, the other team will have their season end.
The festivities begin at 7:30 p.m. MT. You can catch the game on Sportnet’s national feed in Canada (with Rick Ball and Greg Millen), ESPN2 in the United States (with Bob Wischusen and Brian Boucher), and over the airwaves on Sportsnet 960 The Fan (with Derek Wills and Peter Loubardias)!

Projected lines via Daily Faceoff:
@Johnny Gaudreau – @Elias Lindholm – @Matthew Tkachuk
@Andrew Mangiapane – @Mikael Backlund – @Tyler Toffoli
@Dillon Dube – @Calle Jarnkrok – @Blake Coleman
@Milan Lucic – @Trevor Lewis – @Brett Ritchie
@Noah Hanifin – @Rasmus Andersson
@Oliver Kylington – @Michael Stone
@Nikita Zadorov – @Erik Gudbranson
@Jacob Markstrom [3-3, 1.52 GAA, .945 SV%] starts in net, backed up by @Daniel Vladar. The scratches are expected to be goaltender @Adam Werner, blueliner @Connor Mackey, and forwards @Ryan Carpenter and @Adam Ruzicka. @Chris Tanev’s status for tonight is unclear and we’re guessing that he won’t be in. (He didn’t participate in morning skate.) But we’ll update as more information becomes available.
Advertisement
Ad
Advertisement
Ad
When the Flames have been good in this series, they’ve managed to avoid penalty trouble, roll their lines at even strength, and generally just play with pace, structure, and drive. When they’ve been not good, it’s been similar as their “good” play, just a lot sloppier. Execution and battle level has been the basic difference between the Flames wins and losses in this series.
With the chances of a supremely good regular season being dashed tonight, expect the Flames to be at their best. Keep your eyes peeled for the Flames’ best players: if they’re going to win, the likes of Gaudreau, Lindholm, Tkachuk, Mangiapane, Backlund and Coleman will need to be sharp.

Projected lines via Daily Faceoff:
@Michael Raffl – @Roope Hintz – @Joe Pavelski
@Jason Robertson – @Jamie Benn – @Tyler Seguin
@Jacob Peterson – @Vladislav Namestnikov – @Marian Studenic
@Joel Kiviranta – @Radek Faksa – @Denis Gurianov
Advertisement
Ad
Advertisement
Ad
@Ryan Suter – @Miro Heiskanen
@Esa Lindell – @John Klingberg
@Joel Hanley – @Jani Hakanpaa
@Jake Oettinger [3-3, 1.69 GAA, .954 SV%] starts for the Stars, backed up by @Scott Wedgewood. The scratches are expected to be goalie @Adam Scheel, defencemen @Andrej Sekera and @Thomas Harley, and forwards @Alexander Radulov, @Ty Dellandrea and @Fredrik Karlstrom. We’re operating under the assumption that @Luke Glendening’s lower body injury keeps him out of this game, but we’ll update as information becomes available.
Give the Dallas Stars credit: they’ve made the Flames work for everything in this series. They’ve battled. They’ve clogged up the middle of the ice. They’ve done a great job supporting their goaltender, because he’s been their best player and they’ve managed to clear out rebounds, box out opposing players, and do whatever they can to help Oettinger succeed. And their key players have made key plays at key times – looking at you, @Joe Pavelski, @Jason Robertson and @Roope Hintz.
Advertisement
Ad
Advertisement
Ad
We’ll see if they have enough left in the tank to do it one more time.

The Flames won two out of three meetings in the regular season – their lone loss was in overtime – and the two clubs have split their six games in this series thus far.