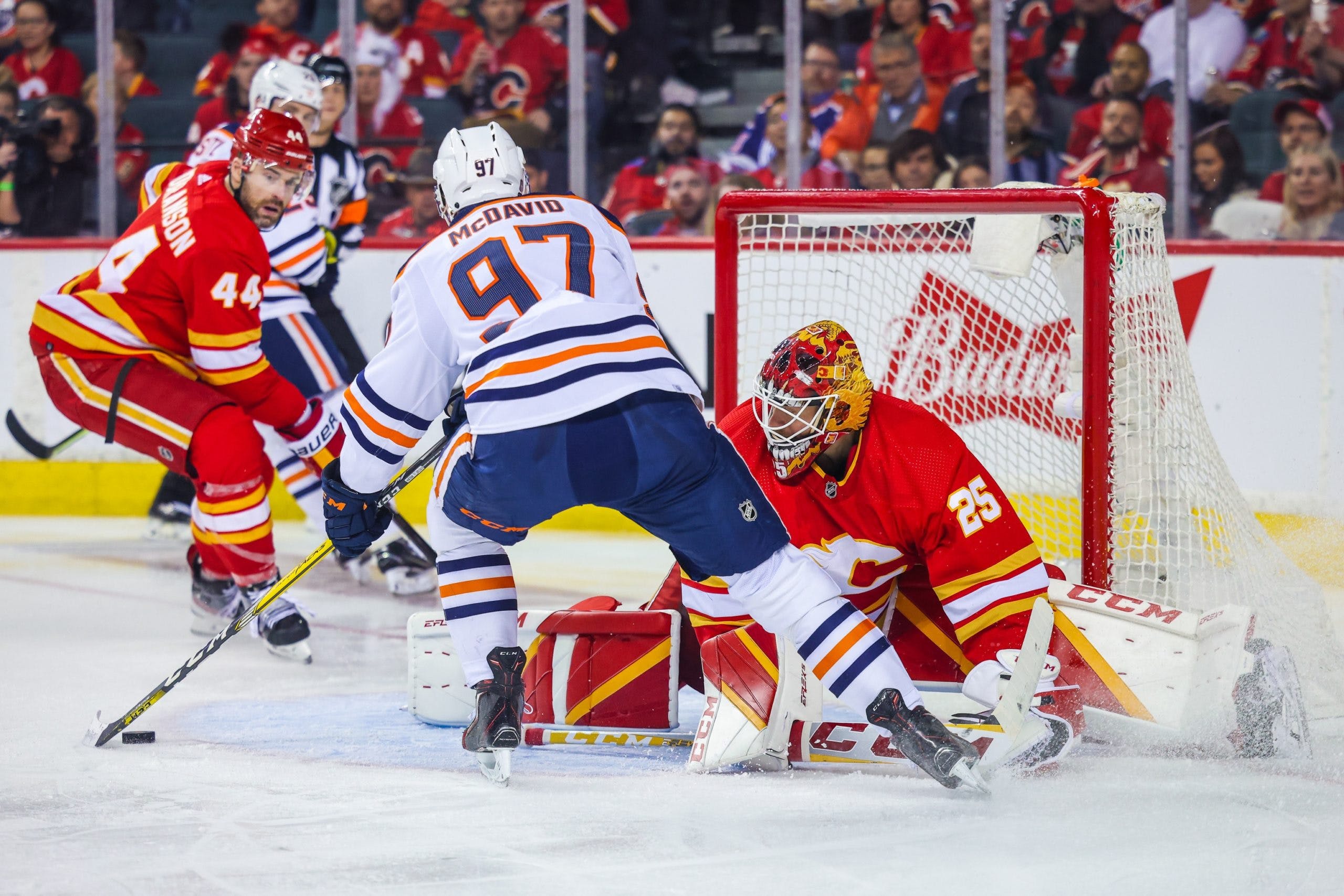 Photo credit: Sergei Belski-USA TODAY Sports
By Ryan Pike
8 months ago
Comments
Folks, we have ourselves a series.
After a track meet in Game 1 where the Calgary Flames and the Edmonton Oilers both played fairly poorly, we got a Game 2 where the teams were pretty good in most game situations. In a game punctuated by a lot of special teams play, with advantages skewed towards the visitors, the Oilers battled to a 5-3 victory over the Flames in Game 2.
This series is tied 1-1 headed back to Edmonton.

The Flames opened the scoring three minutes into the opening period. The Elias Lindholm line gained the offensive zone and then started cycling the puck. Michael Stone’s had two point shots blocked, but his third clapper got through and beat Mike Smith to give the Flames a 1-0 lead.

A strong forecheck from the Trevor Lewis line led to an offensive zone face-off that the coaches left the line out for. It paid off, as Lewis won the puck back to Erik Gudbranson. Smith stopped Gudbranson’s initial shot from the point, but Brett Ritchie jammed in the rebound to give the Flames a 2-0 lead.
Advertisement
Ad
Advertisement
Ad

Later on in the period, though, the Oilers answered back. The Flames got hemmed into their own end by the Connor McDavid line, with the Oilers just beating the Flames on every 50/50 puck or clearing attempt. McDavid made a nice puck protection play behind the net, then shuffled the puck to Duncan Keth, sneaking in from the point, and his blast beat Jacob Markstrom to cut the home side’s lead to 2-1.
Late in the period, a near-goal for the Oilers was blown down by the officials. Zach Hyman blew past Oliver Kylington in the neutral zone. His initial shot was blocked, but bounced around. Ryan Nugent-Hopkins swatted at the rebound and Markstrom scrambled to glove the puck. The play was whistled down and the puck bobbled into the net. The play was reviewed and stayed no-goal; the explanation via ESPN’s Greg Wyshynski was that the official blew the play dead when the puck was under Markstrom and out of sight.
Advertisement
Ad
Advertisement
Ad

Shots were 13-12 Oilers (11-9 Flames at five-on-five) and scoring chances were 7-6 Flames in the first period.
The opening first few minutes of the second period were quite eventful. The Flames killed off the final 1:09 of a Nikita Zadorov minor that carried over from late in the first period. As that penalty expired, Edmonton took a too many men minor. Darnell Nurse broke his stick on that ensuing man advantage, so the Flames passed the puck around, ending with a slick backhand pass from Elias Lindholm on one side of the Oilers crease to Tyler Toffoli on the other side. Toffoli shelved the puck over Smith to give the Flames a 3-1 lead.

The Oilers responded back. Twice. But only one counted. A pair of off-setting penalties after Toffoli’s goal gave us some four-on-four. McDavid cut through the crease and collided with Markstrom on a rush, then Leon Draisaitl buried the loose rebound to make it 3-2. Except the Flames challenged for goalie interference and the goal was washed out.
Advertisement
Ad
Advertisement
Ad
But 32 seconds after that happened, the Flames got crossed-up in their own zone after some really nice passing and McDavid deked Markstrom out, big-time, and tucked the puck behind him to make it a 3-2 game. Again.

The Oilers kept pressing, though, and as Kailer Yamamoto drove towards the Flames’ net he was clipped by Stone’s stick, leading to a double-minor. On the ensuing Oilers man advantage, Evan Bouchard fired a shot past Markstrom from the top of the circles (with one second left on the first Stone minor) to tie the game up at 3-3.

A BOUCHARD BLAST FOR THE TIE! 💣 #StanleyCup | #BattleofAlberta | #LetsGoOilers pic.twitter.com/GiB42mFZN9

Shots were 15-13 Oilers (7-6 Flames at five-on-five) and scoring chances were 9-7 Flames in the second period.
The third period was pretty back and forth, with the goaltenders making good saves at both ends.
Advertisement
Ad
Advertisement
Ad
With the Flames on the man advantage, the Oilers took advantage of a turnover and took the lead midway through the third period. Hyman jumped on a bobbled puck inside the Oilers’ zone – Nugent-Hopkins made a nice poke-check to put a pass into Andersson’s skates rather than onto his stick – and went off to the races, beating Markstrom on a breakaway to give the Oilers a 4-3 lead.

The Flames couldn’t do anything with the remainder of their power play. The Flames had a seeming goal waved off when the official lost sight of the puck under Smith. Shortly after the penalty expired, Mike Smith made a heads up bounce pass to spring Draisaitl on a breakaway and he beat Markstrom to give the Oilers a 5-3 lead.
Advertisement
Ad
Advertisement
Ad

The Flames pulled Markstrom for the extra attacker and got a late power play, but couldn’t solve Smith again.
Shots were 15-11 Flames (10-7 Flames at five-on-five) and scoring chances were 7-6 Oilers in the third period.

Through two periods, the Flames were the team that took too many penalties and made too many mistakes – some of which resulted in penalties and some of which resulted in good scoring chances for the Oilers. But Markstrom and the penalty kill were good enough to hold the Flames in the game through 40 minutes.
But with the game up for grabs, the Oilers were better at key moments than the Flames. The Flames made key mistakes at key times, and that was the difference in a really tight, evenly-matched hockey game.
Advertisement
Ad
Advertisement
Ad

Mikael Backlund’s been quite good since late in the Dallas series, but he was superb in this game.

The game was right there for the taking in the third period. The Oilers jumped all over a pair of Flames lapses and scored on two breakaways in the span of 2:22. That was basically the game right there.

The Flames’ Game 2 losing streak has been extended to 13 games. The last Game 2 they won was in the Western Conference Final in 2004.
Fans of both teams probably strongly disliked the officiating, with multiple “Ref, You Suck” chants from fans wearing both teams’ jerseys during the game.

This series now shifts to Alberta’s capital city of Edmonton for the next two games. Game 3 is on Sunday night at Rogers Place, and it’s a 6 p.m. MT start. (Likely the puck drops around 6:15 or thereabouts.)
Advertisement
Ad
Advertisement
Ad
This best-of-seven series is now tied at 1-1.