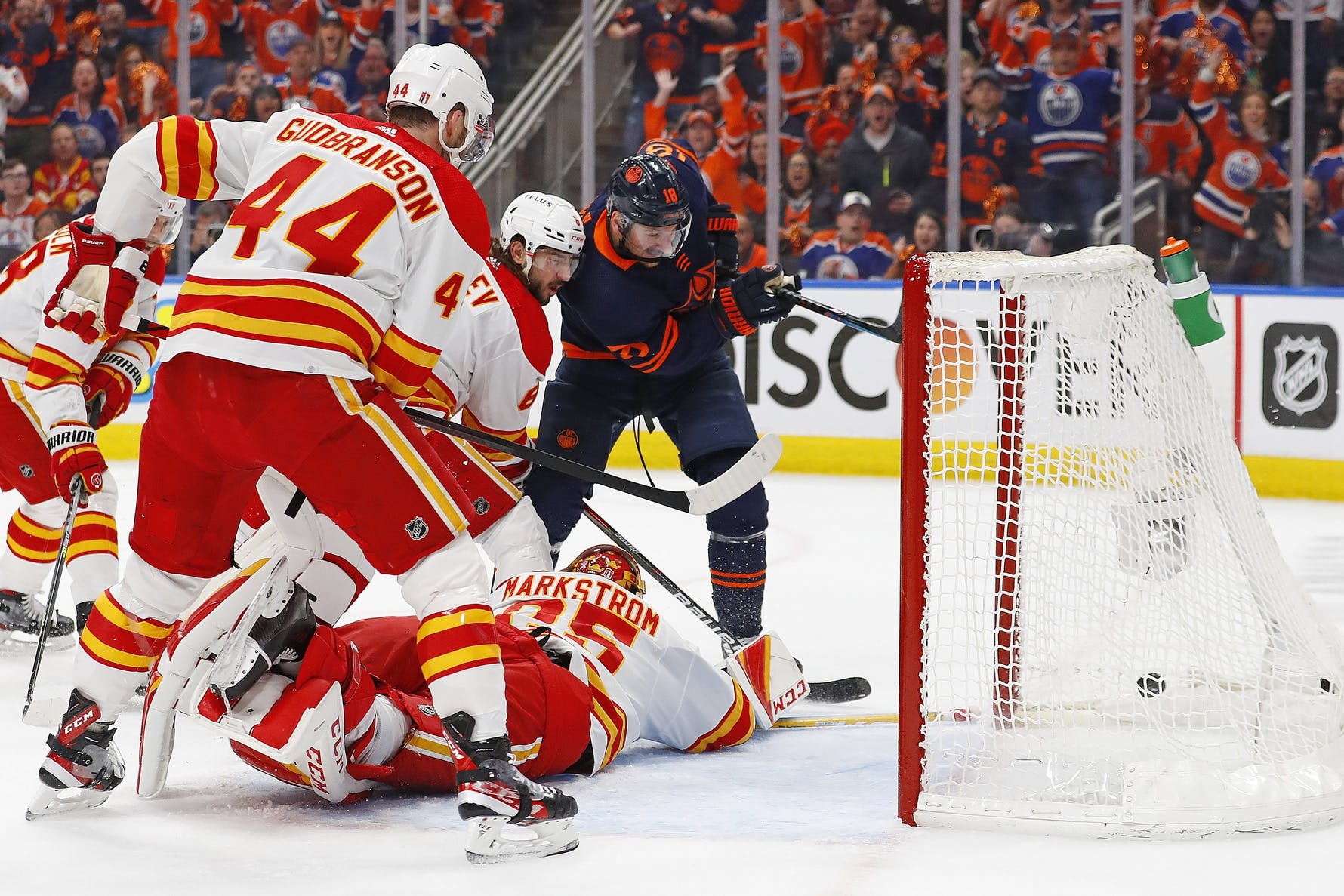 Photo credit: Perry Nelson-USA TODAY Sports
By Ryan Pike
8 months ago
Comments
The Calgary Flames did not have a good first period in Edmonton in Game 4, giving up three goals off a series of miscues. They battled for the remaining two periods. They made good plays. They made the Oilers work. But the Flames made a few too many mistakes against the Oilers, and the Oilers made them pay.
The Flames lost 5-3 in Game 4 to the Oilers. The Oilers now lead their best-of-seven series 3-1.

This game started poorly for the Flames. Off an Oilers dump-in, Jacob Markstrom went out to play the puck. His pass rolled on him… right to Ryan Nugent-Hopkins, who shot high over a diving Markstrom to score and give Edmonton a 1-0 lead.

Something, something, tend the goal…? 🤔

A little later, the Oilers got a power play and made the Flames pay. Tyler Toffoli tripped up Warren Foegele in front of the Edmonton bench – if we’re being honest, it looked like a slewfoot – and Edmonton cashed in. The penalty kill stood around for a couple seconds waiting what Leon Draisaitl would do with the puck to Markstrom’s right. He passed to Connor McDavid, who shot it on net. Zach Hyman jammed in rebound, out-muscling Chris Tanev, to make it 2-0 Oilers.
Advertisement
Ad
Advertisement
Ad

The Oilers got one more goal late in the first period. Off a dump-in, Calle Jarnkrok attempted to pass the puck up the wall. Unfortunately, the pass was intercepted by Draisaitl. His pass to Evander Kane sent him into the high slot. His shot attempt was partially deflected by Nikita Zadorov’s stick, causing the puck to flutter past Markstrom to give the Oilers a 3-0 lead.

Have yourself a period, @EdmontonOilers. 🙌#StanleyCup | #LetsGoOilers pic.twitter.com/q2a38gZwS1

Shots were 14-9 Flames (14-6 Flames at five-on-five) and scoring chances were 13-7 Flames in the first period.
The Oilers controlled play for much of the first half of the second period. But Elias Lindholm was chopped down on a rush through the neutral zone, giving the Flames a man advantage. After Noah Hanifin held the puck in at the blueline a couple times, Lindholm made a patient pay in the slot, extending a toe-drag past Darnell Nurse in the slot and beating Mike Smith with a wrist shot to cut Edmonton’s lead to 3-1.
Advertisement
Ad
Advertisement
Ad

On the very next shift, just 36 seconds later, a heads up play by Tanev sent Mikael Backlund into the Oilers’ zone with speed. He cut around Duncan Keith and chipped the puck on net, beating Smith five-hole to cut the Oilers lead to 3-2.

Shots were 7-7 (6-5 Oilers at five-on-five) and scoring chances 9-6 Oilers in the second period.
The Flames pushed in the third period, but took a too many men bench minor. On the resulting power play, Markstrom made a big save at one end, followed shortly thereafter by Rasmus Andersson scoring on Smith from inside the defensive blueline. No, really. His shot seemed to completely baffle Smith and went in.

But the Oilers regained the lead late in regulation. The Flames couldn’t corral a dump-in. Kailer Yamamoto chased down the puck and fed the puck to Tyson Barrie at the point. Barrie’s shot was stopped, but Nugent-Hopkins out-battled the Flames out front and jammed in the rebound to give the Oilers a 4-3 lead.
Advertisement
Ad
Advertisement
Ad
The Flames immediately took a double-minor for high-sticking. They battled during their penalty kill, but couldn’t tie this game up. Kane added an empty net goal late to give the Oilers a 5-3 lead.
Shots were 12-10 Flames (7-5 Oilers at five-on-five) and scoring chances were 6-4 Flames in the third period.

The Flames were fairly good in this game, but they just made too many mistakes. They did a quite good job of containing McDavid, for the most part. But man, just look at the four goals they gave up: Markstrom’s whiffed pass, a bad Toffoli penalty away from the play, an intercepted zone exit (where the shot was tipped by a defender), and a dump-in they couldn’t corral (and a rebound they couldn’t corral).
The post-season is a time where mistakes can kill you, and the Flames just made too many of them.
Advertisement
Ad
Advertisement
Ad

Let’s go with Backlund, who was motivated, energetic and quite good overall.
And a stick-tap to Tanev, obviously playing through a pretty gnarly injury, playing a ton and playing quite well.

Nugent-Hopkins’ game-winner, coming just five and a half minutes after the Flames tied it up, was an absolute back-breaker. In that game situation, you absolutely have to find a way to get to the end of the period with the game dead-locked.

Andersson’s goal was scored from 132 feet from Edmonton’s net, according to the NHL game log.
All three Flames goal-scorers are from Sweden.