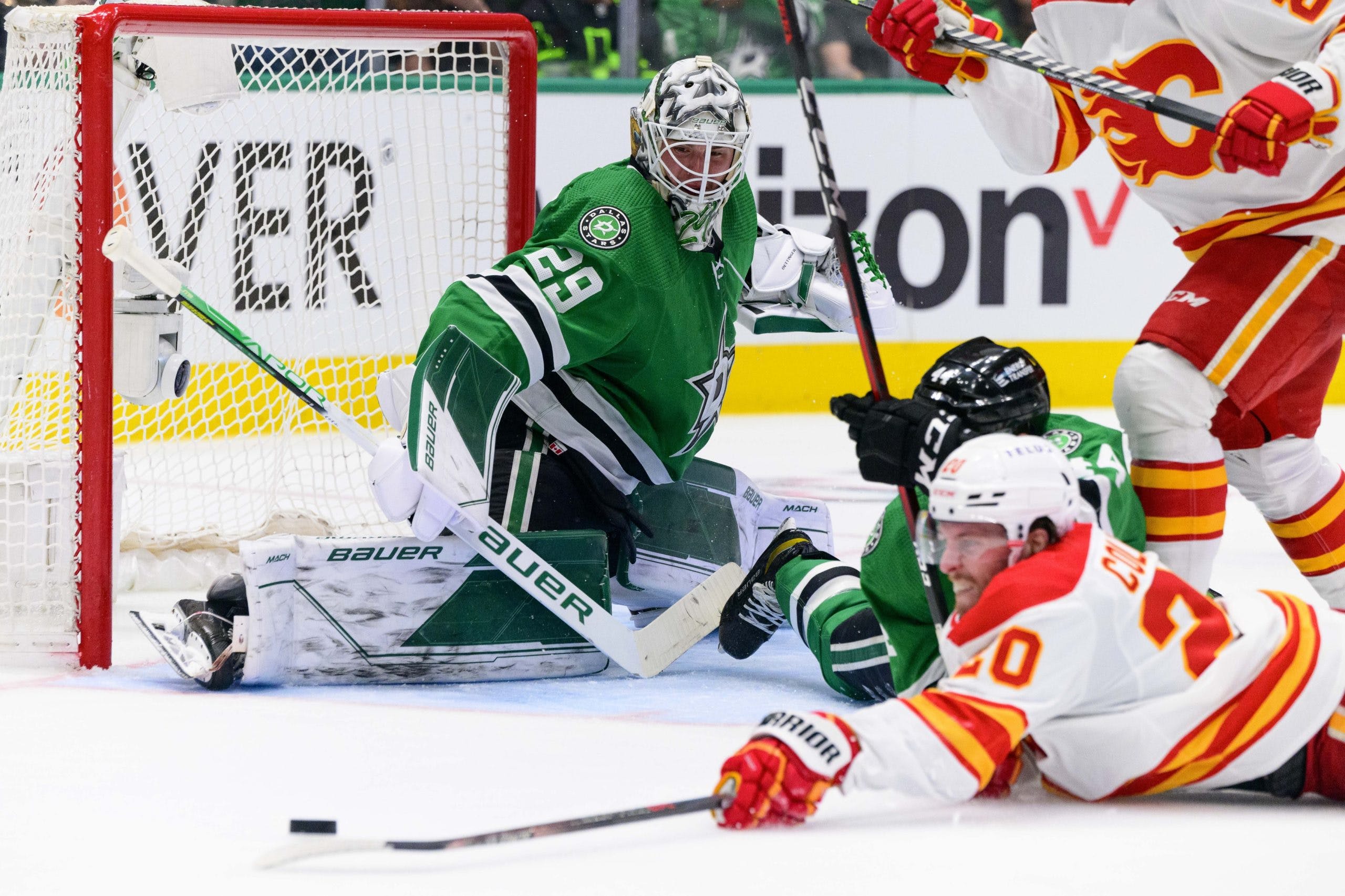 Photo credit: Jerome Miron-USA TODAY Sports
By Ryan Pike
8 months ago
Comments
The Calgary Flames and Dallas Stars headed south to Texas to continue their first round series on Saturday night. Once again, it was a really close, tight, battle of a hockey game, though it was much more high-event than the two games had been offensively.
The lead changed hands a couple times, but the Stars got the go-ahead goal on a third period power play and hung on for a 4-2 win on home ice. The Stars lead this best-of-seven series 2-1.

The opening period featured Matthew Tkachuk fighting playoff villain John Klingberg just 82 seconds in. The remainder of the period, and game, featured many penalties, but thankfully a few scoring chances and goals.
During a stretch of four-on-four, Dallas opened the scoring. Radek Faksa beat Mikael Backlund on a face-off, then headed to the slot. Esa Lindell’s point shot was deflected by Faksa past Jacob Markstrom to give the home team a 1-0 lead.

But the Flames answered back about five minutes later. Milan Lucic made contact with Jake Oettinger on the initial scramble and with Oettinger still down, Trevor Lewis jumped on a loose puck and tied the game up at 1-1.
Advertisement
Ad
Advertisement
Ad

The Stars challenged the play for goaltender interference but the goal was upheld. The best explanation we can find under the auspices of Rule 69 (which governs goaltender interference) is that Lucic was outside the crease, had nowhere to go, tried to avoid contact, and that Oettinger sticking out his leg to change his position on the ice initiated the contact in the first place.

On the Flames 1st goal, Lucic tries to avoid Oettinger, and the contact happens just outside the crease as Oettinger gets his left edge in the ice to recover, therefor getting in the way of Lucic. Very close but good goal because of that.

Shots were 13-12 Flames (6-5 Stars at five-on-five) and scoring chances were 10-7 Stars in the first period.
The Flames got out to a good start in the second period. The fourth line got some zone time in the offensive zone, cycling the puck and enabling a line change and swapping the first line on while cycling. The Stars couldn’t corral a loose puck, allowing Johnny Gaudreau to find Elias Lindholm in his usual spot in the slot for a one-timer that gave the Flames a 2-1 lead.
Advertisement
Ad
Advertisement
Ad

The Stars tied things up later in the period off a wild sequence. Some scrambly defensive play by the Flames in their own zone gave Miro Heiskanen a great scoring chance, which was stopped by Markstrom stacking the pads and basically doing a barrel role. The puck stayed in play and in the zone, and the Stars kept possession, cycled the puck, and Heiskanen’s point shot was stopped by Markstrom, but Joe Pavelski jammed in the rebound to tie the game at 2-2.

What a save by Markstrom. What a response by Pavelski. 🤯

Shots were 16-12 Flames (10-7 Stars at five-on-five) and scoring chances were 17-5 Stars in the second period.
The third period began with some back and forth play. But some pressure by the Stars on consecutive shifts led to a Blake Coleman slashing penalty in the Flames zone, giving the Stars a power play. The Flames blocked the first few zone entry attempts, but eventually the Stars broke through and cashed in. Vladislav Namestnikov’s initial shot was stopped, but Markstrom booted out a rebound and Pavelski cashed in, again, for his second rebound goal of the game to give the Stars a 3-2 lead. (Rasmus Andersson and Dillon Dube chased Namestnikov, leaving Pavelski all alone in front.)
Advertisement
Ad
Advertisement
Ad
The Flames pulled Markstrom for the extra attacker with a couple minutes left in an attempt to tie the game. But they couldn’t generate enough meaningful zone time in the Stars end. Roope Hintz added an empty netter late. This one ended as a 4-2 victory for Dallas.
Shots were 12-8 Flames (9-5 Flames at five-on-five) and scoring chances were 9-4 Flames in the third period.

The Flames were pretty good in this game. But again, the details of there game weren’t quite there. Look at the three goals they gave up:
The Flames’ details in the defensive zone just weren’t there in those situations, and the Stars took advantage as the guys in green kept finding gaps and quiet areas between Flames coverage. And they found ways to take penalties or lose face-offs to disrupt the in-game momentum they generated through their offensive zone time or scoring chances.
Advertisement
Ad
Advertisement
Ad
The other big deficiency was special teams. The Flames had 13 shots and zero goals on their man advantages. Dallas had four shots and one goal on theirs. Considering how even this game was at even strength, that basically decided the game.

Let’s go with Lewis, who had a goal, was really effective at the face-off dot, and just generally played smart, intense hockey. Honourable mentions to Lindholm, who had a goal, and Markstrom, who gave his team a chance in this game.

There’s two, both from the third period.
First, Pavelski’s power play goal gave the Stars the lead and came off a bad Flames penalty at the wrong time for such a penalty.
Second, Gaudreau was sprung into the Stars zone by Tyler Toffoli with a few minutes left in the third period. Gaudreau was stopped by Oettinger on perhaps the Flames’ best late chance to tie the game.
Advertisement
Ad
Advertisement
Ad

Due to the ending of the Pittsburgh/NY Rangers on TNT and Sportsnet, the start of this game was a little late: 8:49 pm local (Central) time in Dallas.
There were a few ugly bits of contact in the second period. Chris Tanev got upended by Jamie Benn in the corner of the Flames zone. Andersson got sent into the boards awkwardly by Faksa a little later on.

These teams are back at it in a couple of days. Game 4 goes Monday night in Dallas, with the broadcast beginning at 7:30 p.m. MT and puck drop likely around 7:45 p.m. MT.
The Stars lead this best-of-seven series 2-1.