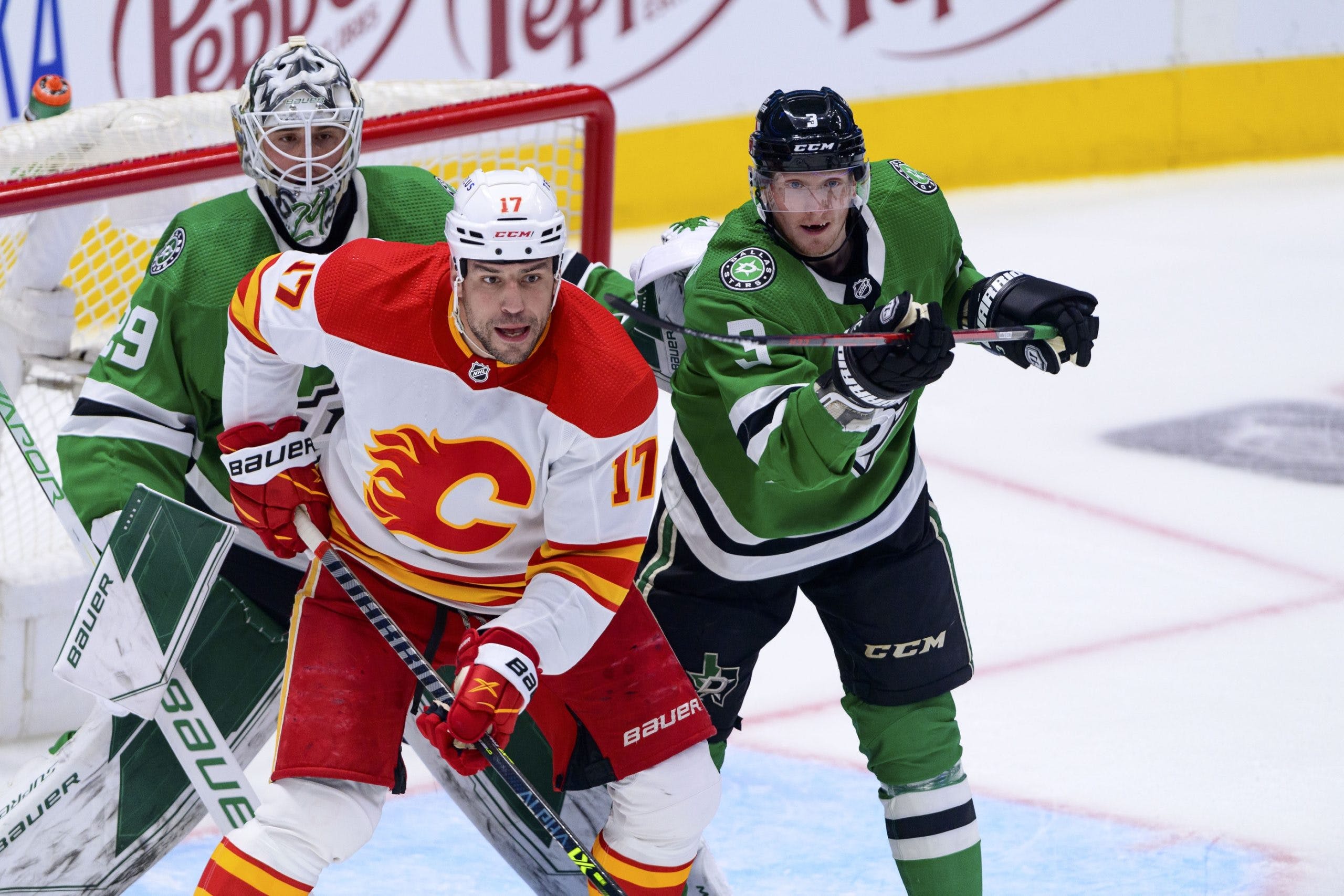 Photo credit: Jerome Miron-USA TODAY Sports
By Ryan Pike
8 months ago
Comments
The Calgary Flames played pretty well in Games 2 and 3 against the Dallas Stars and arguably deserved better than the two losses they received. The Flames played a really, really good game of hockey on Monday night in Game 4 against the Stars and they were rewarded.
The Flames battled for three periods, often dominating play for long stretches, and cashed in with goals at key times en route to a 4-1 victory over Dallas to tie their best-of-seven series up at 2-2.

The Flames came out with urgency, as you would expect in their situation. They were all over the Stars in the first period, controlling play, peppering Jake Oettinger with scoring chances, and doing everything but score.
Oettinger absolutely robbed Tyler Toffoli with his glove in the period.

That's one hell of a glove save from Jake Oettinger on Tyler Toffoli to keep this game scoreless. pic.twitter.com/Q1mAvKRGXx

Shots were 19-8 Flames (17-7 Flames at five-on-five) and scoring chances were 15-7 Flames in the first period.
The Flames continued to press, and so did Dallas in response, so the period ended up being high-event and really entertaining.
Jacob Markstrom made a superb save on Tyler Seguin midway through the period, leading to a Flames odd-man rush the other way.
Advertisement
Ad
Advertisement
Ad

I thank god everyday that the #Flames have Jacob Markstrom in net 🔥 pic.twitter.com/MPMDLgnn2A

The Flames had a couple strong shifts in the offensive zone that led to a penalty drawn by Andrew Mangiapane. On the resulting power play, Johnny Gaudreau was high-sticked, giving the Flames 1:43 of five-on-three time. They moved the puck well to set up a point shot and eventually it clicked, with Rasmus Andersson’s one-timer beating Oettinger high to give the Flames a 1-0 lead.

After that goal, the Flames hemmed the Stars into their own zone for a couple of minutes consecutively, but they couldn’t pad their lead. (Their pressure was dispelled by Mangiapane taking a penalty off a face-off.)
Shots were 20-15 Flames (15-9 Flames at five-on-five) and scoring chances were 11-7 Flames in the second period.
The teams exchanged chances in the first half of the third period. The Stars got a power play but the Flames killed it off. The Flames got some pressure after that kill and Gaudreau got hooked by John Klingberg after splitting the defence and cutting to the net, leading to a Gaudreau penalty shot.
Advertisement
Ad
Advertisement
Ad
Gaudreau deked just enough to get Oettinger to open up his pads, then slid the puck between his legs to give the Flames a 2-0 lead.

The Flames made it 3-0 a few minutes later. Elias Lindholm whiffed on an initial scoring chance in the slot and the puck trickled towards the open left point. Noah Hanifin hustled to beat the Stars to the puck and hold the puck in, throwing it down to the corner to Gaudreau. Gaudreau found Lindholm in the slot and Lindholm beat Oettinger stick-side to extend the lead.

Leaving this guy alone in front of the net is a bold strategy. pic.twitter.com/dD9YV339Vi

The Stars pulled Oettinger for the extra attacker with just under six minutes left after Mikael Backlund took an elbowing penalty and the Stars broke up Jacob Markstrom’s shutout attempt on the six-on-four man advantage. Seguin picked the top corner off a rush zone entry to cut the Calgary lead to 3-1.
Advertisement
Ad
Advertisement
Ad
But that’s as close as the Stars would get. Mikael Backlund added an empty netter late in this game to make it a 4-1 Flames victory.
Shots were 15-13 Flames (9-8  Flames at five-on-five) and scoring chances were 11-3 Flames in the third period.

The Flames did a lot of the same things they did in Games 1 through 3 in this game. But they just did most of those things better and more consistently than they did earlier on. They battled. They made smart, simple plays with the puck. The details of their game were better and it led to a positive result.
In general, their puck management and battle level were the biggest differences that led to the victory.

A lot of players deserved praise. The best player in red and white was Gaudreau. But Markstrom was excellent throughout this game, and Michael Stone had a heck of a game as the seventh defender in this game.
Advertisement
Ad
Advertisement
Ad

The Flames opening the scoring on a five-on-three power play was very big, as perhaps doubts were creeping in that they would ever beat Oettinger.
And the Gaudreau penalty shot goal seemingly was the hockey gods making up for Gaudreau not scoring on his breakaway late in Game 3.

Milan Lucic took the opening face-off against Jamie Benn. Lucic is not usually a centre, and actual centres Calle Jarnkrok and Trevor Lewis were also on his line to start.
Gaudreau took a hit to the head from Vladislav Namestnikov early in the first period. He briefly left the game for evaluation, but returned and finished the game.

Vlad Namestnikov with a hit to the head on Johnny Gaudreau.

Stone was inserted into this game in place of Brett Ritchie, using 11 forwards and seven defenders and cycling through different forward configurations all evening long.
Advertisement
Ad
Advertisement
Ad

The Flames set a franchise record for most shots on goal in a three period (e.g., non-overtime) playoff game in this contest with 54.

The series shifts back to Calgary. The Flames host Dallas on Wednesday night at the Saddledome. It’ll be a 7:30 p.m. MT puck drop.
This best-of-seven series is now tied 2-2.