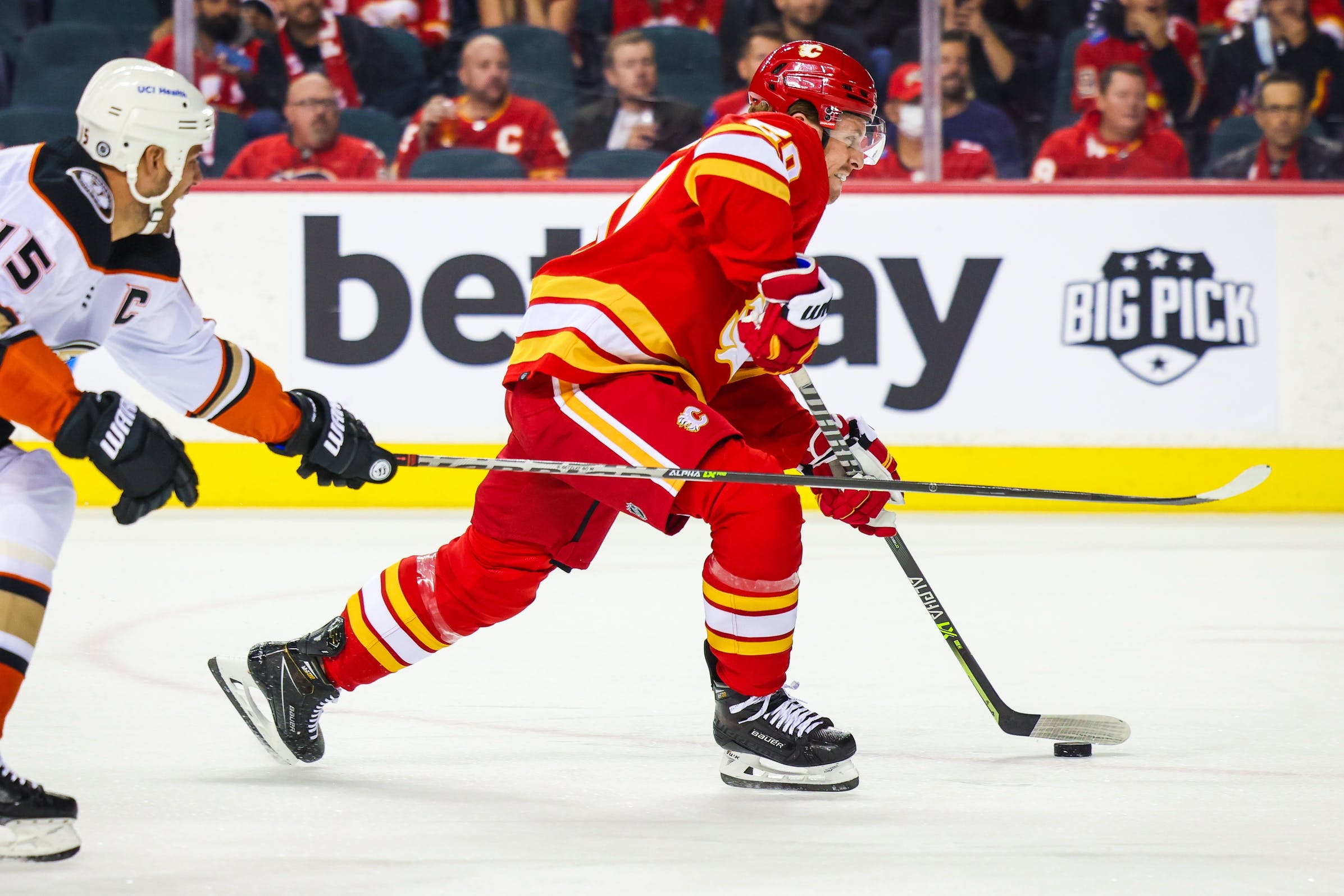 Photo credit: Sergei Belski/USA Today Sports
By Ryan Pike
1 year ago
Comments
The Calgary Flames opened their home schedule in front of an energetic Saddledome crowd on Monday evening. The Flames played a pretty good game at five-on-five, but weren’t able to translate zone time into enough high-danger scoring chances. They lost a 3-2 overtime effort to the Anaheim Ducks.

The Flames were a bit rusty early, experiencing some troubles executing passes on attempted breakouts from their defensive zone. But the Ducks couldn’t execute in the Flames zone themselves, which gave the Flames some opportunities to right the ship.
Midway through the period, the Ducks whiffed on a scoring chance in the high slot. Johnny Gaudreau grabbed the loose puck and sent Blake Coleman in on a partial breakaway against John Gibson. He beat Gibson with a glove-side shot to give the Flames a 1-0 lead, their first of the young season.

The Ducks managed to tie things up later on after the Flames took a weird penalty. Mikael Backlund attempted to dump the puck out of the defensive zone and the puck looked like it was going to soar over the glass. Matthew Tkachuk, on the Flames bench, tried to swat the puck down. Tkachuk ended up getting a minor penalty and on the resulting Anaheim power play, Cam Fowler scored on a shot from the point to tie the game at 1-1.
Advertisement
Ad
Advertisement
Ad
Shots were 16-7 Flames (10-5 Flames at five-on-five) and scoring chances were 9-3 Flames in the first period.
The Flames were much better early in the second period than they were early in the first period, and it resulted in a ton of early offensive zone time. And a goal. Essentially, for the better part of a minute, Anaheim couldn’t clear the puck. Rasmus Andersson kept it in. Noah Hanifin kept it in. And eventually Gaudreau found a seam and found Elias Lindholm with a nice cross-zone pass, which left Lindholm open for a quick shot that beat Gibson to give the Flames a 2-1 lead.

The Flames carried the play for much of the rest of the period, but they weren’t able to translate that into high quality scoring chances or more goals.
Advertisement
Ad
Advertisement
Ad
Shots were 14-9 Flames (all at five-on-five) and scoring chances 11-3 Flames in the second period.
The Flames kept piling on shots, but the Ducks took advantage of a Flames defensive lapse to tie the game up. All of the defenders congregated in one side of the defensive zone, leaving Rickard Rakell open for a pass from Adam Henrique and wide-open for a shot that got past Markstrom to tie the game up at 2-2.

After #Flames D Erik Gudbranson blows a tire, LW Johnny Gaudreau, as last man back, successfully defends a two-on-one. Two assists tonight and now an absolutely crucial play in his own end.

Shots were 13-8 Flames (11-8 Flames at five-on-five) and scoring chances 12-5 Flames in the third period.
This game went to three-on-three overtime. The Flames got caught on an odd-man rush and Jamie Drysdale scored (off a great pass from Troy Terry after deking around Gaudreau) to give Anaheim a 3-2 victory.

For the most part, the Flames played a structured, composed, up-tempo game at five-on-five. They generated chances, though they probably wished they had more high quality chances, and those chances gave them goals. And unlike against Edmonton, they managed to stay out of the penalty box (for the most part).
Advertisement
Ad
Advertisement
Ad
But they were just sloppy enough defensively at key times for the Ducks to stay close and get the win in extra time.

Coleman was consistently noticeable whenever he was on the ice. Plus, he scored a really nice goal to begin his Flames career.

The Flames just couldn’t get that third goal when they were up 2-1. And the Ducks managed to bury the chances when they got them, notably when the Flames were leaky defensively late in regulation.

The alternate captains were Mikael Backlund, Sean Monahan and Matthew Tkachuk.
Milan Lucic fought Anaheim’s Nicolas Deslauriers in the second period.
This was the first home-opener loss since 2016.
The special teams units were as follows:

The Flames (0-1-1) are hitting the road! They’re in action on Thursday night in Detroit in their first game in the United States since Mar. 1, 2020.
Advertisement
Ad
Advertisement
Ad