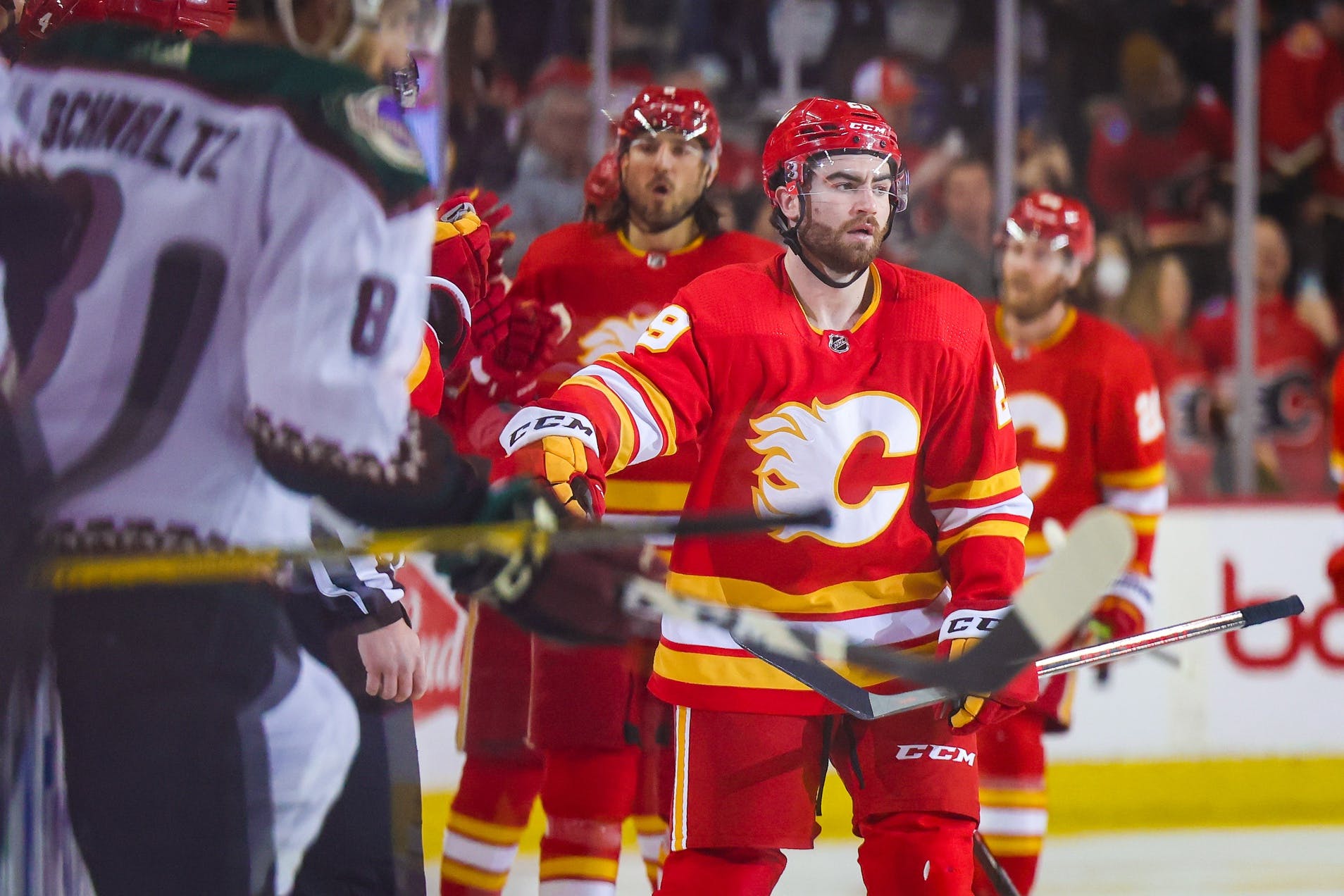 Photo credit: Sergei Belski-USA TODAY Sports
By Ryan Pike
9 months ago
Comments
The Calgary Flames weren’t particularly good in the first period of Saturday night’s game with the Arizona Coyotes. However, the Flames went to their locker room for the first intermission, came back out, and absolutely demolished the Coyotes for the remainder of the game.
The Flames beat the Coyotes by a 9-1 score.

The Flames were pretty flat for the first half of the opening period, and the Coyotes took advantage of a lack of attention to detail to grab an early lead. Jay Beagle skated in on the left wing and flung the puck towards the net-front area, where Nick Ritchie out-maneuvered Noah Hanifin and tipped the puck past Jacob Markstrom to give the Coyotes a 1-0 lead.
The Flames got better as the period wore on, but headed to the locker room down a goal. Shots were 15-11 Flames (all at five-on-five) and scoring chances 11-9 Flames in the first period.
The Flames had a much more productive second period.
38 seconds into the period, Dillon Dube back-checked and stole a puck from Anton Stralman in the Coyotes zone. He curled back towards the Arizona net and sniped a shot short-side on Harri Sateri to tie the game at 1-1.
Advertisement
Ad
Advertisement
Ad

38 seconds after that goal, the Flames drove into the Coyotes zone. Mikael Backlund and Tyler Toffoli battled behind the net. The puck squirted out towards the corner, but Nikita Zadorov pinched down to win the race to the puck. He found Andrew Mangiapane in the slot, and Mangiapane fired the puck past Sateri to make it 2-1 Flames.

You loaf to see it. pic.twitter.com/sbNMRr341L

62 seconds after that goal, the Flames got the puck deep in the Coyotes zone again. Johnny Gaudreau had the puck behind the Coyotes net and found Matthew Tkachuk near the blue paint. A quick pass and Tkachuk chipped it past Sateri to make it 3-1 Flames.

And 53 seconds after that goal, Dube got possession of the puck, powered his way between two Coyotes defenders, and poked the puck in-between Sateri’s legs to give the Flames a 4-1 lead.
Advertisement
Ad
Advertisement
Ad

Cut right through the defence. pic.twitter.com/hqkh9CQU0U

Karel Vejmelka replacd Sateri in the Arizona net after the fourth goal.
Midway through the period, the Flames caught Arizona a bit disorganized on a line change. Backlund found Blake Coleman entering the zone to Vejmelka’s right and Coleman beat him off the rush to give the Flames a 5-1 lead.

Made it look easy. pic.twitter.com/JIG6J2Dmsc

Late in the period, the top line got cycling the puck in the Coyotes zone and eventually got rewarded. Tkachuk put the puck on net and after a bit of a scramble, Elias Lindholm chipped it under Vejmelka’s arm to give the Flames a 6-1 lead.

Shots were 14-5 Flames (all at five-on-five) and scoring chances 11-7 Flames in the second period.
Arizona put Sateri back in net for the third period. The Flames got an early power play and added to their lead. They cycled and had a few good looks. As the man advantage came off the clock, Gaudreau accepted a pass from Hanifin, walked into the Coyotes net and uncorked a slap shot that beat Sateri to give the Flames a 7-1 lead.
Advertisement
Ad
Advertisement
Ad

The Coyotes made a really soft clearing attempt of their own zone that was intercepted by Gaudreau. A couple quick passes later and Tkachuk redirected a nice feed from Lindholm at the side of the net to make it 8-1 Flames.

Matthew Tkachuk has 39 goals on the year, send tweet. pic.twitter.com/eMi177KOTd

A little later, Gaudreau accepted a drop-pass from Lindholm in the Coyotes zone, skated in on Sateri’s right side and sniped a shot past him glove-side to extend the lead to 9-1 Flames.

The Flames weren’t all that good in the opening period, and anybody watching probably had flashbacks to the fairly blah first two periods against Seattle and last two periods against Vegas. Their attention to detail wasn’t particularly good.
Advertisement
Ad
Advertisement
Ad
But the Flames flipped the switch after the first period, found their details, and absolutely clobbered the Coyotes. They out-scored them by a significant margin, and the goals were all well-earned: smart reads, good plays executed well, and general smart attention to detail on both sides of the puck.
If they play like this in the playoffs they probably won’t score nine goals every game (as most playoff teams are better than the Coyotes), but they could be a very tough night at the office for whoever they’re playing.

Let’s give a joint award to the top line. Each of Gaudreau, Tkachuk and Lindholm had four points. Each scored a goal – Tkachuk had two. They were motivated, physical and dangerous against the Coyotes.

This was also long-time Postmedia scribe Kristen Anderson’s final game covering the Flames. All the best to Kristen in her new role with the Calgary Stampede. We’ll miss you!

The Flames (46-20-9) are headed on the road. They visit Chicago on Monday night in the first half of a back-to-back, followed by a trip to Nashville on Tuesday.
The Flames have clinched a playoff spot. They’re guaranteed to finish (at least) second in the Pacific Division. Their magic number to clinch the Pacific Division crown is 3: any combination of Flames wins and Oilers losses adding up to three or more clinch a division title for the Flames.
Advertisement
Ad
Advertisement
Ad