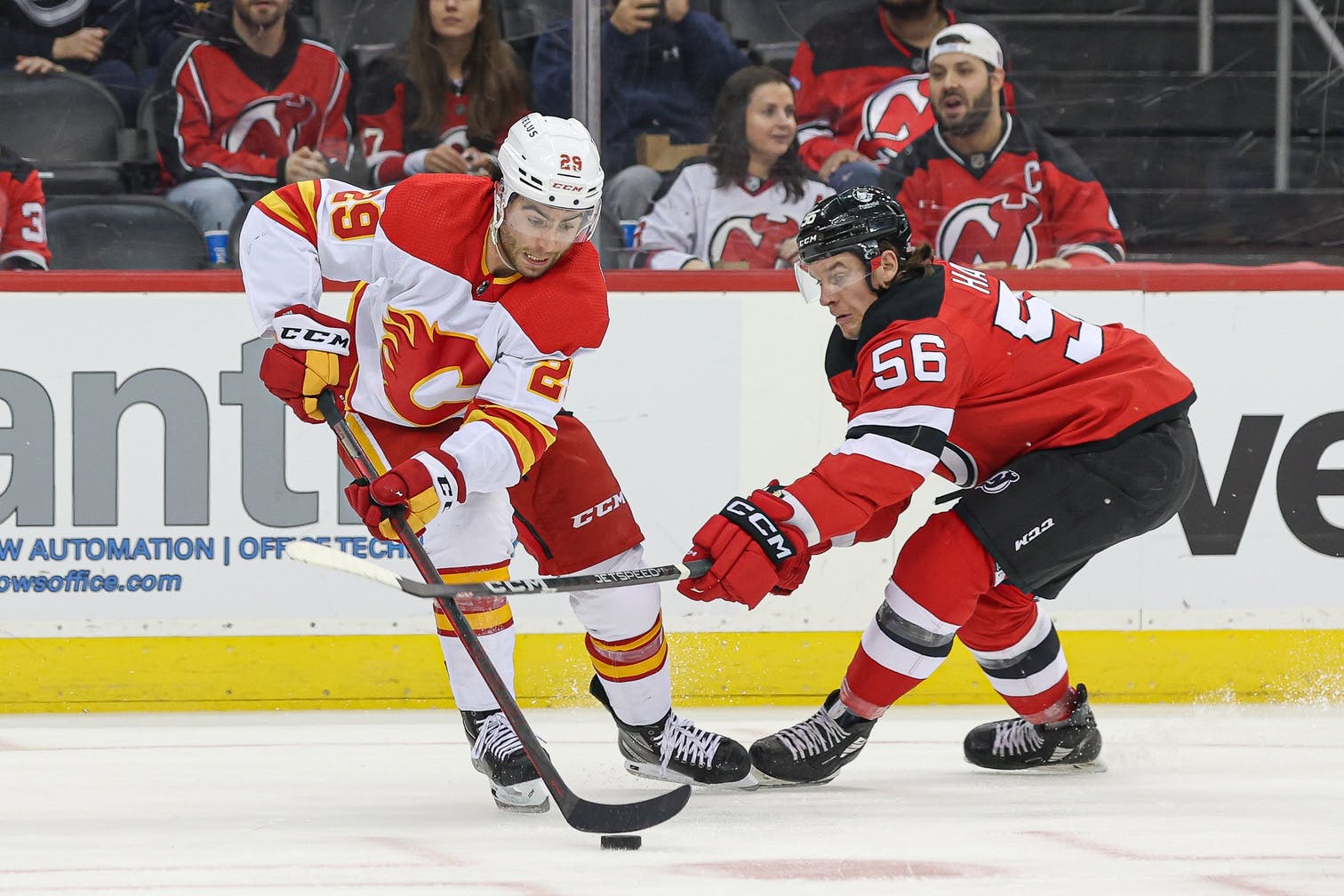 Photo credit: Vincent Carchietta-USA TODAY Sports
By Ryan Pike
14 days ago
Comments
Welcome to our game day content brought to you by NHL odds site Betway!
The Calgary Flames battled on Tuesday night in Newark. Facing a rested New Jersey Devils squad, missing four regulars and playing on the second half of a back-to-back, the Flames were playing a scheduled loss. The Flames worked and made a game of it, but their puck management decisions in the back half of Tuesday’s game worked against them – yet again.
The Flames were undone by their the details of their game, losing 3-2 to New Jersey to extend their losing streak to six games.

The Flames looked strong in the first period. They played physical, they managed the puck well, and they scored the first goal.
Midway through the first period, Dillon Dube drew a penalty in the offensive zone. On the resulting man advantage, Rasmus Andersson set up Nazem Kadri on the right side of the zone, and Kadri fired the puck past Vitek Vanecek to give the Flames a 1-0 lead.
Advertisement
Ad
Advertisement
Ad

NAZZZZZ!!! Launches a beauty from outside of the face off dot and breaks the ice in this game. 1-0 🔥 #Flames pic.twitter.com/nvValRWkgr

Late in the period, Nikita Zadorov served up a weak clearing attempt that was intercepted at the point and deflected into the Flames net by Yegor Sharangovich. However, the goal was challenged by the Flames on the basis of being off-side, and the challenge worked and the Flames remained up 1-0.
First period shots were 14-5 Flames (8-4 Flames at five-on-five) and five-on-five scoring chances were 6-4 Flames (high-dangers were 1-1).
The Flames were much sloppier with their puck management in the second period, and it made for an eventful several minutes.
Early in the period, a Devils shot went off the post and landed in the crease behind Jacob Markstrom… where it was kicked in by Sharangovich. The goal was reviewed and waived off, keeping the Flames up by a goal.
Advertisement
Ad
Advertisement
Ad
But the Devils eventually drew even. Nick DeSimone’s shot was intercepted by the Devils in the slot area, and New Jersey transitioned the puck in a hurry. The Flames seemed a bit confused about who should cover who, which allowed Ryan Graves to accept a pass from Nico Hischier, and fire the puck past Markstrom to make it a 1-1 game.
Turnovers continued to hurt the Flames. A turnover led to a Brett Ritchie minor, which led to another minor to Blake Coleman when he tried to tie a player up on a zone entry. With 63 seconds of a two-man advantage, Dougie Hamilton scored from the top of the circles to give the Devils a 2-1 lead.
Second period shots were 10-9 Devils (five-on-five shots were 9-5 Flames) and five-on-five scoring chances were 9-4 Devils (high-dangers were 3-1 Devils).
Advertisement
Ad
Advertisement
Ad
The Flames pushed back early in the third. Miles Wood was called for bear-hugging Andrew Mangiapane to the ice, leading to a Flames man advantage. Tyler Toffoli fired a puck past a big Adam Ruzicka screen and beat Vanecek to make it a 2-2 game.

TOFFFF!!! Scores a beauty from outside the slot and ties the game at 2 🔥🔥 #Flames pic.twitter.com/oEj0e4BGE7

But the Devils got that one back midway through the period. Zadorov pinched but couldn’t come up with the puck, and the Devils made a couple quick passes through the neutral zone that sent Hischier into the Flames zone with a step on MacKenzie Weegar. He beat Markstrom five-hole to give the Devils a 3-2 advantage.
The Devils held on for the victory.
Advertisement
Ad
Advertisement
Ad
Third period shots were 12-5 Flames (11-5 Flames at five-on-five) and five-on-five scoring chances were 7-7 (high-dangers were 4-2 Flames).

The Flames were really good in the first period. Engaged, physical, good attention to detail, good puck management. All-together good. Full marks.
But between fatigue and the Devils making some adjustments, the Flames got a little bit worse as the game wore on. Their puck management got worse. Turnovers were more plentiful. The Devils got better scoring chances, and the Flames got a bit more scrambly defensively.
The road team just didn’t have enough in the tank to manage the puck or the game properly, and the Devils played a patient game, waited for mistakes, and pounced on them.

Hischier’s go-ahead goal midway through the third period felt like a bridge too far for the Flames. They just couldn’t muster enough after that goal to draw even again.

Already without Oliver Kylington (personal), Chris Tanev (upper body) and Michael Stone (undisclosed), the Flames were missing Jonathan Huberdeau due to an injury.

According to #Flames coach Darryl Sutter, Jonathan Huberdeau wasn’t able to get his foot in a skate today.

Dennis Gilbert made his Flames debut in place of Connor Mackey, who was scratched. Gilbert fought Nathan Bastian in the first period.
This was the first game this season that the Flames had lost despite scoring a power play goal. Prior to this game, they were 5-0-0 when scoring on the man advantage.
Advertisement
Ad
Advertisement
Ad

The Flames (5-5-2) are off to Boston. They face the Bruins on Thursday night to close out their road trip.