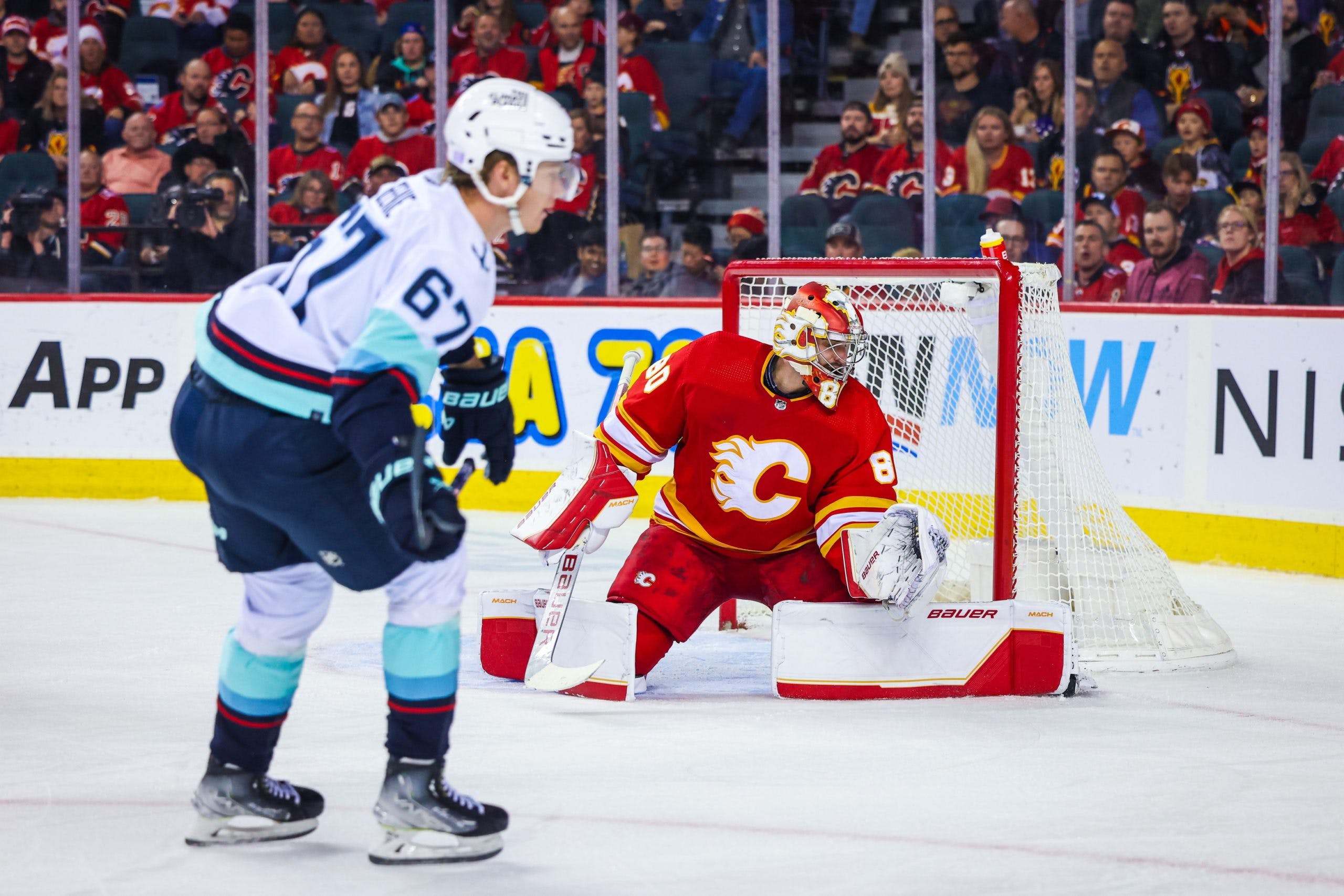 Photo credit: Sergei Belski-USA TODAY Sports
By Ryan Pike
2 months ago
Comments
Welcome to our game day content brought to you by NHL Lines site Betway!
The Calgary Flames hosted the Seattle Kraken on Tuesday night at the Saddledome. The Flames didn’t have a bad performance necessarily, but their game was punctuated by lapses and odd decision-making. Despite being up 4-2 early in the third period, the Flames (and their lead) were devoured by the Kraken and they lost by a 5-4 score.

The first period was pretty sloppy for both teams, but the Kraken were the more engaged team between the two clubs. The Flames went nearly 10 minutes between shots on goal, and an early power play wasn’t particularly sharp.
The Flames did manage some nice defending, though, as they killed off 36 seconds of a Seattle two-man advantage after Mikael Backlund and Nikita Zadorov took consecutive minors.
The Kraken struck first on the scoreboard. The Flames turned the puck over and Seattle’s top line carried the puck into the Calgary zone, then fed it to a pinching Carson Soucy, who fired a shot from the top of the circles that beat Dan Vladar top corner to give the Kraken a 1-0 lead.
Advertisement
Ad
Advertisement
Ad
First period shots were 10-7 Kraken (6-6 at five-on-five) and five-on-five scoring chances were 4-4 (high-danger chances were 1-1).
The Flames were stronger in the second period, though their power play couldn’t generate a ton offensively. But after an unsuccessful Flames PP, the next shift built a ton of momentum in the offensive zone, and the Flames scored off the rush on the following shift. Zadorov jumped into the rush and redirected a great cross-zone feed from Tyler Toffoli past Joey Daccord to tie the game up at 1-1.

NIKITA ZADOROV!!! Ties this game at 1 off a nice setup by Toffoli 🔥 #Flames pic.twitter.com/hDrAfL5R0c

A little later, Nazem Kadri scored a goal by his damn self. He drove the net in the offensive zone off the rush. He slightly whiffed on his initial chance, but the puck followed him and he put it past a sprawling Daccord to give the Flames a 2-1 lead.
Advertisement
Ad
Advertisement
Ad

But the Kraken tied things up before the end of the period. The Flames seemed to get crossed-up off a broken play in the neutral zone, and the puck got grabbed by Jamie Oleksiak. He went in with Morgan Geekie on a two-on-one against Michael Stone. Geekie beat Vladar high to make it 2-2.
Second period shots were 20-8 Flames (18-7 Flames at five-on-five) and five-on-five scoring chances were 18-6 Flames (high-dangers were 9-2 Flames).
The Flames momentarily grabbed hold of the game with two goals in 17 seconds early in the third period.
First, Elias Lindholm won a scramble face-off in the offensive zone and shuffled the puck over to Toffoli. Toffoli’s shot beat Daccord to give the Flames a 3-2 lead.

TOFFFF!!! Scores a beauty off the face off draw and makes it 3-2 🔥🔥 #Flames pic.twitter.com/PYQJPEB8d9

On the very next shift, the fourth line prevented a Kraken breakout. Trevor Lewis took advantage of a partial screen by Adam Ruzicka in front of Daccord and beat the netminder stick-side to give the Flames a 4-2 lead.
Advertisement
Ad
Advertisement
Ad

TREVOR LEWIS!!! Answers Tyler Toffoli’s goal with a quick one and makes it 4-2 off a beautiful wrister from the hash marks 🔥🔥 #Flames pic.twitter.com/4WbibHKriY

But as the saying goes: there’s no more dangerous lead than a two-goal lead. The Kraken cashed in on a power play after Brett Ritchie was caled for a minor. Daniel Sprong buried a one-timer feed from Alexander Wennberg to cut the lead to 4-3.
With the Flames on a power play, Kadri got his pocket picked in the neutral zone by Yanni Gourde. Gourde went in on a partial breakaway and beat Vladar to tie the game up at 2-2. And after that power play expired, the Flames coughed up the puck at the Kraken blueline and Seattle went in on a four-on-two rush. Matty Beniers buried a feed from Jordan Eberle to give Seattle a 5-4 lead.
The Flames pulled Vladar for the extra attacker late, but couldn’t draw even.
Advertisement
Ad
Advertisement
Ad
Third period shots were 13-8 Flames (8-5 Flames at five-on-five) and five-on-five scoring chances were 5-5 (high-dangers were 2-0 Kraken).

The Flames looked pretty disjointed in the opening period, but they built their game well. They looked better as the game wore on, and they seemed more and more comfortable and confident in all three zones.
But they got a bit too comfortable after they got that early third period lead, and the Kraken kept coming at them, created turnovers and took advantage of the Flames’ loose play with the puck. This was a game the Flames really should have had locked down after getting that 4-2 lead, but they just found ways to cause their own momentum to evaporate and allowed the Kraken to devour their lead.

With the Flames up 4-2, the Kraken scored (unanswered) three goals in just shy of five minutes.

The Flames began this game with these lines:
In the second period, Dube and Mangiapane were swapped. But for the third period, they were swapped back to their original spots.
Michael Stone and Brett Ritchie joined Mangiapane, Backlund and Hanifin on the second power play unit.
Zadorov fought Oleksiak late in the first period, but lost via takedown.

The Flames (5-3-0) are back at it on Thursday night when they host the Nashville Predators.