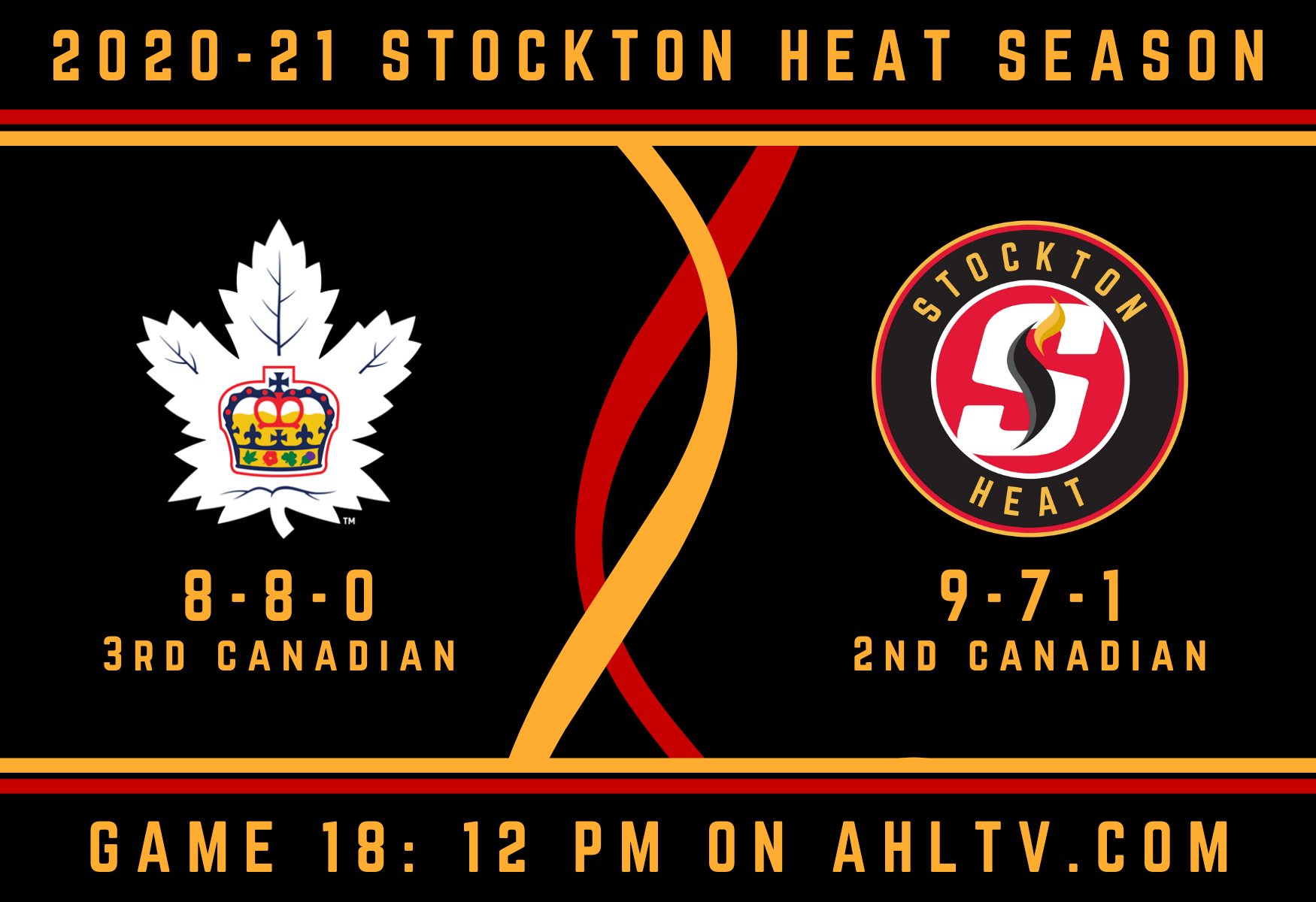 Photo credit: Graphic by Mike Gould
By Mike Gould
1 year ago
Comments
The Stockton Heat lost to three of their four Canadian Division rivals during their recent six-game losing streak.
The Belleville Senators, Laval Rocket, and Manitoba Moose all emerged victorious at Stockton’s expense over that lengthy span. The Heat finally stopped the skid on Saturday, blowing out the B-Sens by a 7-1 score.
Stockton will look to continue that positive progress on Monday with a clash against a welcome opponent. After beating the Heat in back-to-back contests to open the season, the Toronto Marlies have lost the last four games they’ve played against Stockton. They’re the only Canadian team Stockton didn’t face (and lose to) during the streak.
Right now, the Heat need that sort of favourable matchup. Still, they needn’t get too comfortable—Toronto also decisively won its last game after snapping a long losing streak.
Advertisement
Ad
Advertisement
Ad
Marlies goaltender Joseph Woll recorded a 24-save shutout in Toronto’s last game, a 3-0 win over Belleville on Mar. 24. Jeremy McKenna, Joey Anderson, and Scott Pooley scored for the Marlies in the victory.
Seven different players lit the lamp for Stockton in its most recent game. Colton Poolman, Giorgio Estephan, Glenn Gawdin, Connor Mackey, Greg Moro, Luke Philp, and Byron Froese all scored while Artyom Zagidulin made 34 saves on 35 shots.

Stockton — Emilio Pettersen. Stockton’s uber-talented rookie is still trying to find consistency at the AHL level. He scored goals in three consecutive games from Mar. 6 to 10 but has been held to just a single assist in the seven contests, since.
Pettersen’s two linemates could not be having less similar seasons. Luke Philp has been a model of consistency for the Heat and currently ranks second on the Heat in scoring; meanwhile, Dmitry Zavgorodniy has not yet scored a point in his 17 AHL games. Pettersen getting back on track could be key in helping Zavgorodniy finally break out of his slump.
Toronto — Joseph Woll. Remember Andrew D’Agostini, the undrafted 27-year-old goalie who dominated the Heat in the first two games of the season? Well, Joseph Woll has since returned to the Marlies and is coming off a shutout in his most recent appearance.
Advertisement
Ad
Advertisement
Ad
In other words: the Heat will need to be ready to fire a lot of shots on goal. Woll only had to make 23 saves in Mar. 24’s clean sheet. Toronto selected the towering 22-year-old goaltender 62nd overall in the 2016 Draft; since then, he’s been inconsistent in the AHL after putting forth three solid years as Boston College’s starter.

This game will be broadcast on AHLTV.com (subscription required), with the opening puck-drop set for noon MT. Live game updates can be found on Twitter at @miketgould or online at TheAHL.com.