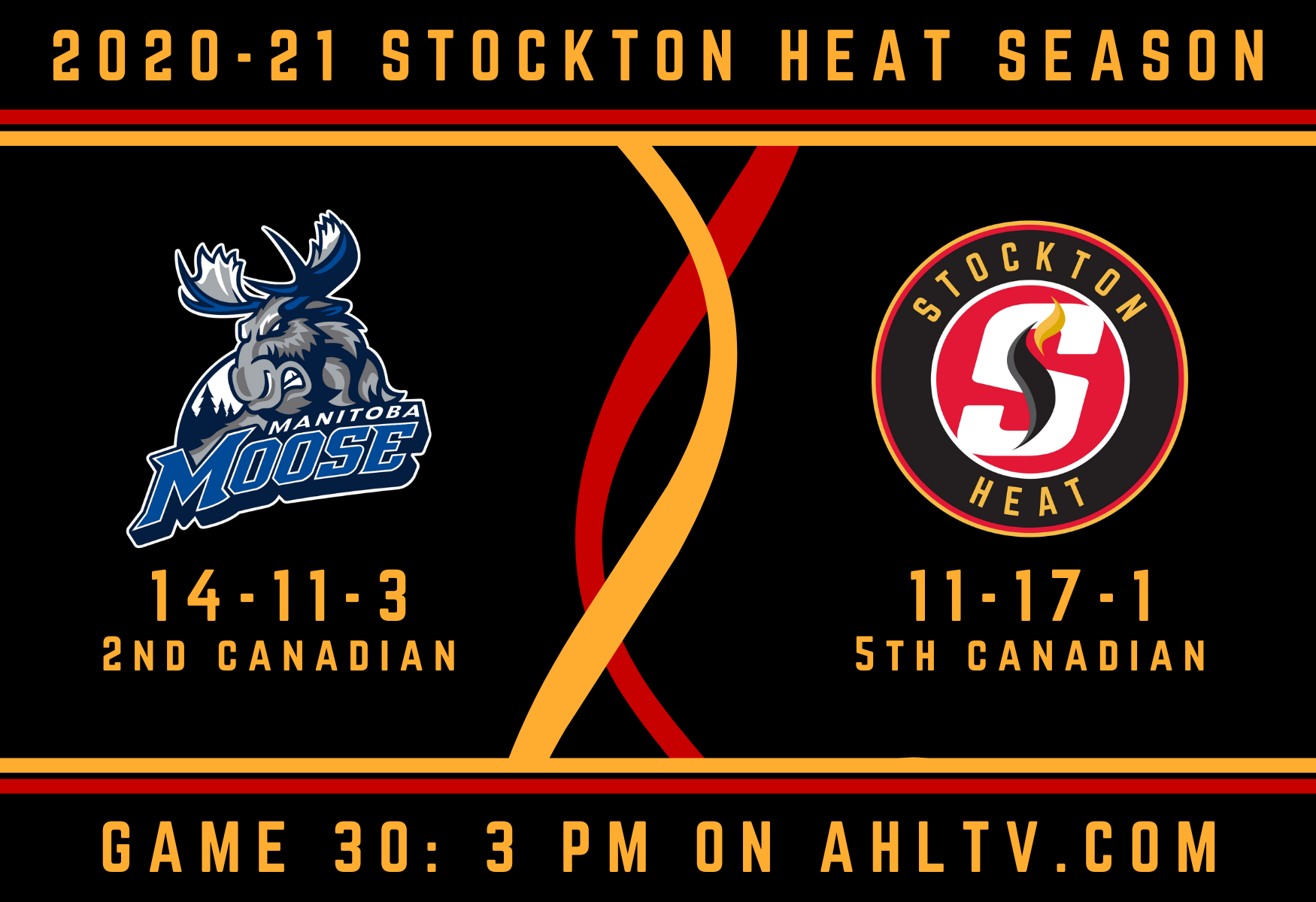 Photo credit: Graphic by Mike Gould
By Mike Gould
1 year ago
Comments
Welcome to the final Stockton Heat game-day preview of the 2020-21 American Hockey League regular season.
The Heat enter Thursday’s game sitting in last place in the AHL’s Canadian Division. Their opponent in the season finale will be the Manitoba Moose, a team Stockton has faced eight times this season and beaten on four occasions.
Goaltending is likely to play a big factor in Thursday’s game. Eric Comrie has started each of Manitoba’s last three games but was recalled by the Winnipeg Jets on Apr. 27, paving the way for Mikhail Berdin to get the start on Apr. 29.
Comrie posted a sparkling .959 save percentage in those three appearances. Berdin, on the other hand, has a 10-10-2 record with a .900 save percentage in the AHL this season.
Manitoba also recalled Dominic Toninato, David Gustafsson, Marko Dano, and Ville Heinola on Tuesday. The Moose will be forced to roll out with a much different lineup in Thursday’s game.
Advertisement
Ad
Advertisement
Ad
Tyler Parsons could return to the lineup for Stockton. He sat out of the last three games with a non-COVID illness after allowing five goals in 25 shots on Apr. 22. Andrew Shortridge has completed Stockton’s tandem with Garret Sparks in Parsons’ absence.
It remains unclear how the AHL will construct a potential playoff schedule—or whether the Heat would even qualify—at this time. For now, this is it.

Stockton — Matthew Phillips. Despite his production decreasing in the second half of the season, Phillips has remained Stockton’s most important offensive player and makes his presence felt almost every time he hits the ice.
Advertisement
Ad
Advertisement
Ad
The 5’7″ winger has collected eight goals and 13 helpers in 29 games this year but has yet to earn a call-up to Calgary. He turned 23 earlier this month and is a pending restricted free agent.
Eric Duhatschek, of The Athletic, has Seattle selecting Phillips in this summer’s expansion draft. Could this be the final time we see him in Stockton silks?
Manitoba — Johnathan Kovacevic. The Jets selected this lanky defenseman in the third round of the 2017 NHL Entry Draft. He’s since turned into a very competent two-way AHL defenseman and has racked up four points in his last four games (all against the Heat).
With Ville Heinola up with the Jets, look for Kovacevic to be relied upon even more heavily by Moose coach Pascal Vincent. Kovacevic, who previously starred at Merrimack College, has two goals and 10 points in 26 games this season. Among Moose blue-liners, only Declan Chisholm and Heinola have scored at a better rate.
Advertisement
Ad
Advertisement
Ad

This game will be broadcast on AHLTV.com (subscription required), with the opening puck-drop set for 3:00 pm MT. Live game updates can be found on Twitter at @miketgould or online at TheAHL.com.