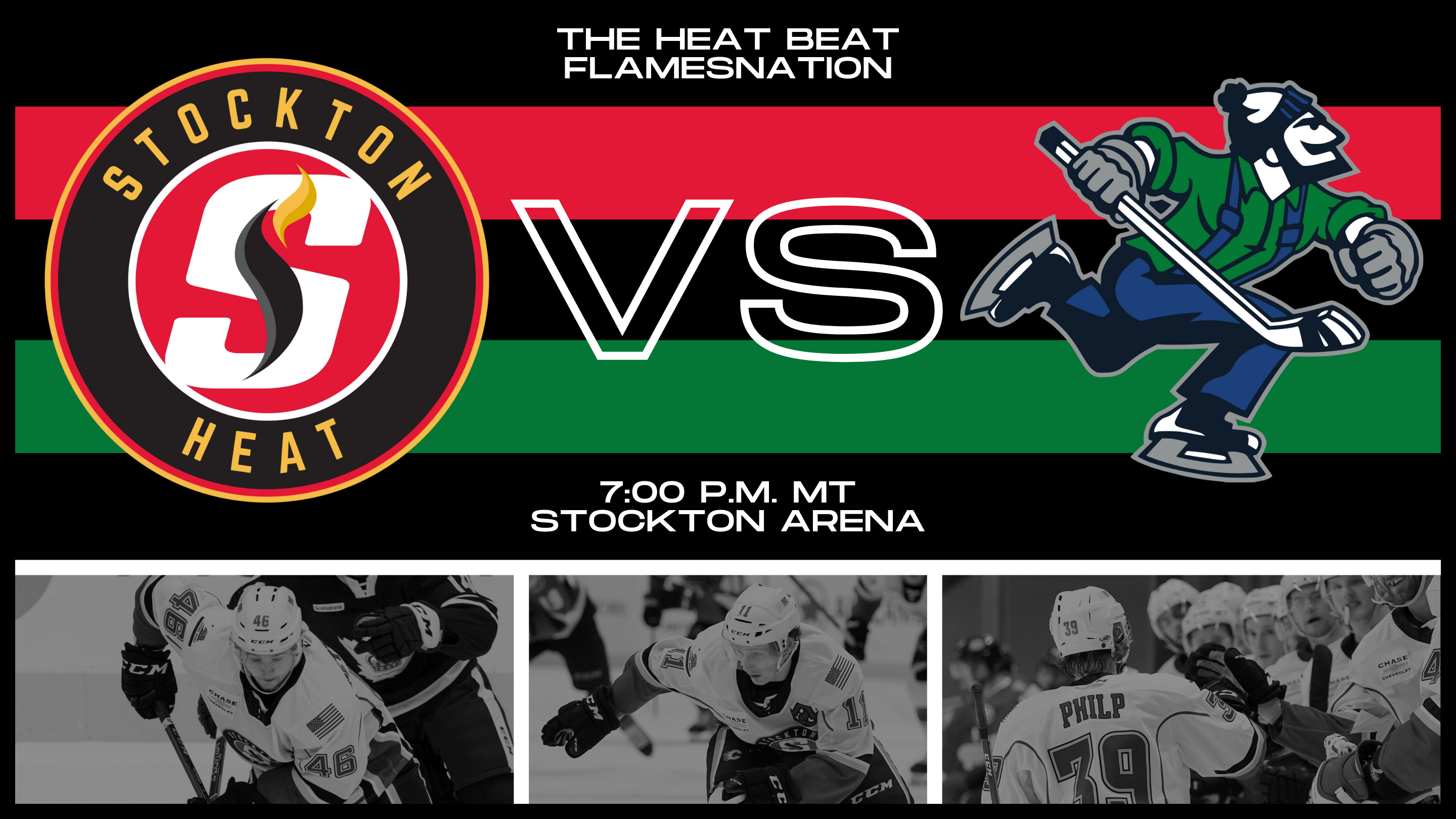 Photo credit: Graphic by Mike Gould
By Mike Gould
1 year ago
Comments
The Stockton Heat have points in seven consecutive games to start the 2021–22 season. Their 6-0-1 record ranks second behind only the 7-0-0 mark of the Ontario Reign in the American Hockey League’s Pacific Division.
On Friday, the Heat dispatched the Abbotsford Canucks by a 3-2 score at Stockton Arena. The two sides will do battle again on Saturday at 7:00 p.m. MT.
Stockton received goals from team captain @Byron Froese, @Glenn Gawdin, and @Adam Ruzicka in the victory. Calgary Flames prospects @Matthew Phillips, @Eetu Tuulola, and @Emilio Pettersen also picked up points in the game.
@Dustin Wolf made 28 saves on 30 shots for Stockton, improving to 4-0-1 on the season with a sparkling .949 save percentage. @Adam Werner will likely man the pipes for the Heat on Saturday.
Ruzicka now leads the entire AHL with seven goals in seven games. All but one of those markers have come at even strength. He currently occupies the middle spot on Stockton’s first line, with @Jakob Pelletier and @Matthew Phillips rounding out a formidable top unit.
Advertisement
Ad
Advertisement
Ad
Cameron Schilling and @John Stevens scored for Abbotsford on Friday. Expect @Arturs Silovs to start for the Canucks after @Michael DiPietro stopped 33 of 36 in the first half of the double-header.

Stockton — @Eetu Tuulola. After a lengthy stint in the press box, Tuulola returned to the ice in Friday’s 3-2 win and made his case to stay in the lineup with a beautiful assist on @Glenn Gawdin’s insurance goal early in the second. The 23-year-old Finn recorded 10 goals and 23 points in 50 games with the Heat in 2019–20 but took a step back last year, scoring just three goals and four assists in 29 contests.
Advertisement
Ad
Advertisement
Ad
Abbotsford — @Jack Rathbone. Despite making the Vancouver Canucks’ roster out of training camp, Rathbone struggled in eight NHL contests to start the season and is now back in the AHL. The 22-year-old left-handed defenceman was a standout at Harvard University for two seasons before turning pro starting with the 2020–21 campaign, in which he picked up two goals and seven assists in eight AHL games and three points (one goal, two assists) in eight NHL contests with Vancouver.

This game will be broadcast on AHL TV (subscription required) and on Spreaker (audio only), with the opening puck-drop set for 7:00 pm MT.
FlamesNation contributor Paige Siewert will provide live game updates on her Twitter account. Additionally, you’ll be able to follow along at TheAHL.com.