Advertisement
Ad
How big is the drop off from Mike Smith to David Rittich? 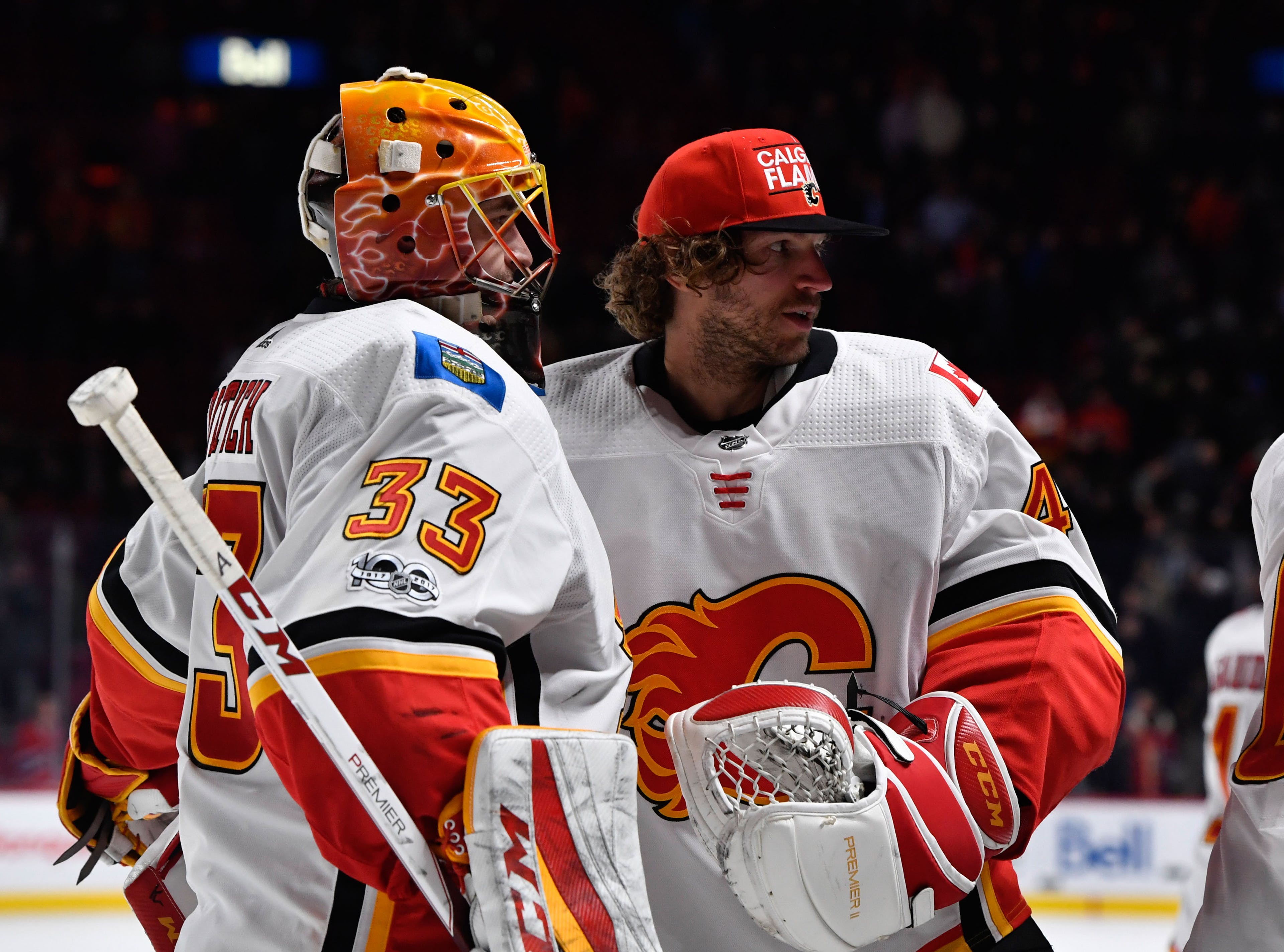 In Greek mythology, there exists a Titan named Atlas whom is tasked (more accurately, punished) with separating the world from the sky, by holding the sky on his shoulders for all eternity.

Through two-thirds of the 2017-18 season, Mike Smith has been the Flames’ Atlas, keeping the sky from falling. Aside from perhaps Johnny Gaudreau or Matthew Tkachuk, he’s been their MVP, and if Smith is out of commission for any stretch of time, it would be a huge hit to the Flames.

But exactly how huge?

Since being called up in late November, David Rittich has played admirably in the few spot starts he’s been afforded. Through 10 games – that include unfortunate relief appearance roasts against Edmonton and Tampa Bay – Rittich has a .927 SV%. In games he’s started, the save percentage turns to a sterling .938. Both numbers are a tick better than Smith’s .921 SV%. However, Rittich has played in just over a fifth of the games Smith has, so let’s not get carried away.

The real positive, in my opinion, is one that will make the mainstream media moist to hear: he passes the eye test with flying colors. Rittich has looked calm, collected and methodical from the first puck he saw in Colorado. Many young goaltenders will manifest their inner jitters through awkward play, but Rittich has never looked out of place thus far.

He’s looked every bit the part of a legitimate NHL goaltender, which bodes well if the Flames will need him to be one every other night for the next while.

Stylistically, every goaltender has their own style quirks. Jonathan Quick and Carey Price are polar opposites in playing style, but at the end of the night, both are top echelon puck-stoppers. For an NHL goalie, it’s about what you do in the crease, not how you do it.

Rittich seems to have been trying to adopt Smith’s puck playing tendencies into his own game more lately, being more active behind the net and playing pucks to his defenceman whenever possible. To me at least, it seems to be an attempt on Rittich’s part to keep the system consistent in Smith’s absence as opposed to it being part of his regular game. It’ll be key for Rittich not to overdo it if he takes over the starter’s net, because if Smith can get himself into a pickle or two every game, Rittich doing too much may spell disaster.

Style, though, is pretty inconsequential in the grand scheme of things. It’s a results oriented league, and contrasting Smith and Rittich’s results this year in detail may grant us better insight into where the drop off may be, and where the Flames will need to make adjustments – if any – to ensure they don’t overexpose their rookie goalie.

The comparison between the 35-year-old NHL All-Star and the rookie 10 years his junior is, quite frankly, wild.

Rittich has posted nearly identical numbers to Smith in every category. Again, sample size warning is in full effect as Smith has seen more than five times the 5v5 action Rittich has, but thus far, the drop off has been literally zero.

What stands out on Rittich’s side is that he’s seen a more fortunate Flames team ahead of him. They own the Goals For ratio by a significant margin, 61%, despite being mostly outplayed, posting a 49.73 CF%. This is reflected in Rittich’s PDO of 103, propped up by a SH% three ticks higher than Smith’s, at 9.64. The Flames are actually shooting below average in front of Smith.

Rittich is also posting a gargantuan MDSV%, at 99. That’ll probably go down. Meanwhile his High Danger save percentage, like Smith’s, is among the league’s best. A team having the confidence in their goaltender to make the save if a risk at one end turns into a quality chance at the other shouldn’t be understated. Thus far, Rittich has earned his teammates’ trust. It’s hard to say if there will a regression there too, seeing as some goalies – like Smith – have always been good against high danger chances, while other goaltenders have always struggled. Which is one is Rittich? Again, that’s why a bigger sample size is needed.

To this point though, the Flames seemed to have stumbled upon found money in Rittich. Signed as a 24-year-old from the Czech Superleague, he has developed over the last 18 months into the ideal backup goaltender: one who doesn’t decrease the quality of netminding when the starter takes a rest. His numbers in every category have, at minimum, matched Smith’s, and the Flames as a whole haven’t dropped their play in front of him.

Too many times in years gone by have the Flames looked like a completely different team in front of their backup – Eddie Lack included – but such has not been true of their play in front of Rittich.

Well, what can we expect out of starting goaltender David Rittich?

The occasional spot start vs. the everyday job is, without a doubt, a different kettle of fish. Different pressures, different expectations, greater stakes. Rittich has largely seen starts on the backend of back-to-backs, where the expectation isn’t usually to win. He’s also been tasked with relatively easy opponents.

Rittich’s seven starts have come against Colorado, Montreal, Vancouver, San Jose, Florida, Edmonton and New Jersey: not exactly a murder’s row, and nothing like the double serving of elite the Flames get to see in their next two games in Boston and Nashville. Should Rittich indeed be forced to take over the starter’s net for the next while, we can consider this his final exam. He’s fared well in his midterms, but now comes the real test. Real pressure against real opponents.

From purely a stats view, what can we expect to change? The Flames’ PDO in front of Rittich is due to regress, likely via SH%, and it’ll be up to Rittich to keep the roof from caving in when it does. Smith’s greatest trick this season has been finding points in the absence of run support. Rittich will more than likely need to do the same. Frankly, that’s what quality starters do in the NHL, and that’ll be his stiffest test as a starter. Nothing we’ve seen to this point suggests he’s incapable of taking on such a challenge, however.

No goaltender will stop 99% of the medium danger chances he faces and we’ll get to find out if Rittich, too, is a formidable HDSV% goaltender. Smith has been able to weather the shooting percentage storm with consistently strong play, so if Rittich is indeed every bit as good as his stats suggest, he should, too.

Likening Smith to Atlas is no exaggeration in the context of the Flames’ season, and most teams would crumble if they lost their Titan for any stretch of time. Luckily for the Flames, they appear to have a backup to Atlas, shown capable of holding the sky in short spurts. In some variations of Greek mythology, it was Hercules who took over from Atlas.

The sky is heavy though, and Hercules was never able to hold it for an extended period of time. Rittich has been able to be the Flames’ Hercules thus far, but there’s no guarantee he can be their Atlas. After all, not even the actual Hercules could.

The early returns on Rittich are extremely encouraging though, and if Smith is indeed sidelined, the Flames’ season is far from extinguished. If anything, Rittich’s starting goaltender audition has been well earned.