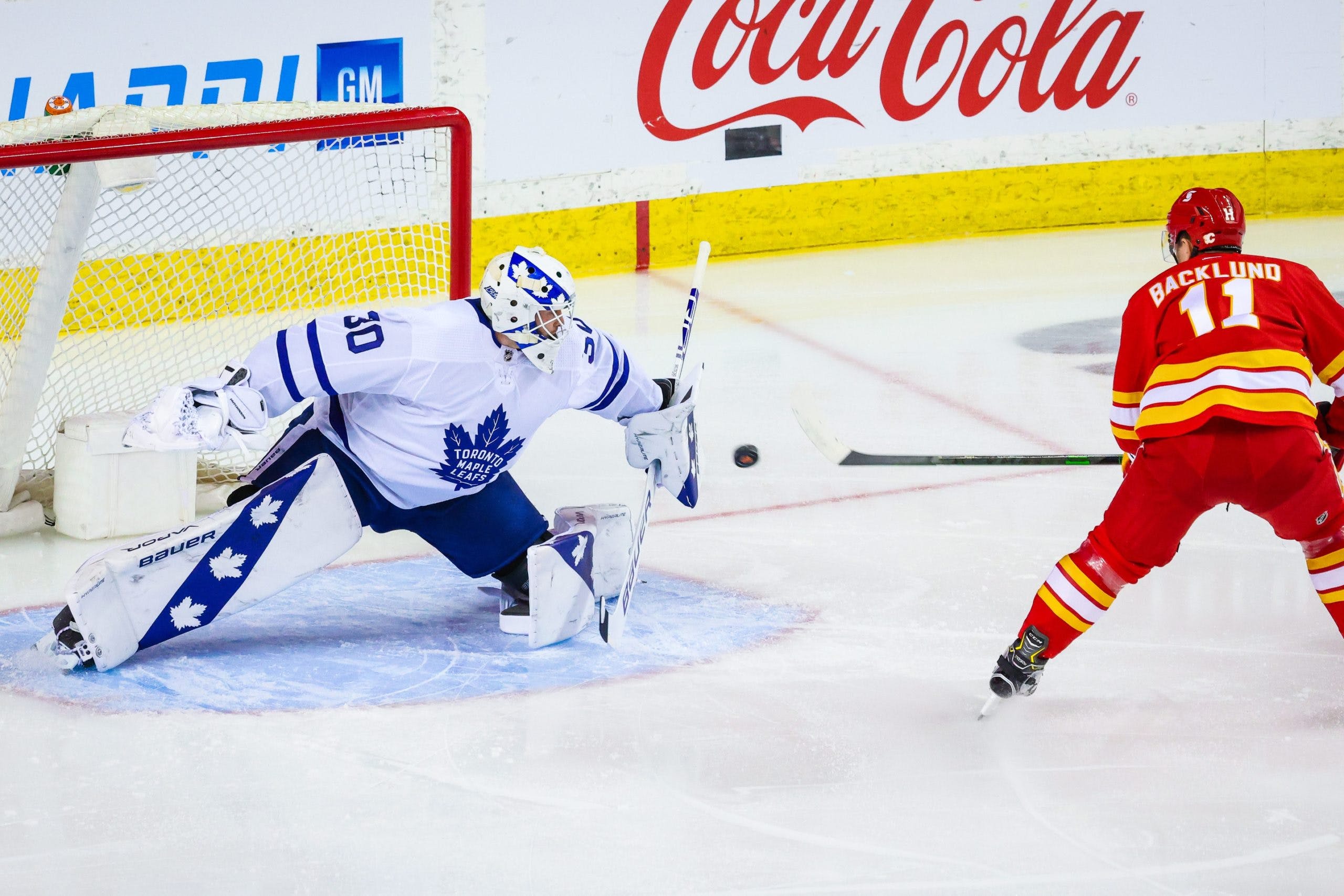 Photo credit: Sergei Belski/USA Today Sports
By Ryan Pike
1 year ago
Comments
The Calgary Flames played a pretty good game on Sunday night against the Toronto Maple Leafs. But as has become the tradition lately, their good play was wiped out by a few mistakes coming back to haunt them. The Flames lost 4-2 to the Leafs in the first of back-to-back games against the (Scotia NHL) North Division’s top team.

The Flames got out to a bit of a sloppy start and the Leafs punished them for it. Noah Hanifin fanned on a clearing attempt and that led to a turnover. A couple passes later and Morgan Rielly’s point shot beat David Rittich to make it 1-0 Leafs.
But the Flames got that one back off a nice bit of execution from the fourth line. Derek Ryan won the face-off and a couple quick passes led to Mark Giordano’s point shot being deflected by Joakim Nordstrom past Michael Hutchinson to tie the game at 1-1.

The Flames took the lead late in the first off some nice work by Mikael Backlund’s line. The trio dumped it in and then did some nice forechecking down low, leading to a Leafs turnover. Backlund fed Andrew Mangiapane in the slot and his quick shot caught Hutchinson off-guard and beat him high to make it 2-1 Flames.
Advertisement
Ad
Advertisement
Ad

The birthday boy with a big goal for the good guys 🔥 pic.twitter.com/XcAlAStrlQ

Shots were 12-11 Leafs and scoring chances 9-8 Flames in the first period.
The Leafs tied things up in the second period, despite the Flames carrying much of the play. William Nylander skated into the Flames zone, then looped back to the point rather than cutting towards the net. This stacked traffic and momentarily confused Calgary’s defenders. That opened some lanes and some quick passing later, and Alex Galchenyuk buried a feed from John Tavares to tie the game at 2-2.
Shots were 13-6 Flames and scoring chances 7-5 Flames in the second period.
The Leafs pulled away early in the third period off a pair of rapid-fire goals. The 3-2 goal saw Rittich make a couple nice saves, but the rebound off the second save bounced off Hanifin’s skate and into the open net. The 4-2 goal saw the Leafs use their speed and execution, as Mitch Marner found a gap in coverage and made a precision pass to Auston Matthews for a tap-in past Rittich.
Advertisement
Ad
Advertisement
Ad
Shots were 12-10 Leafs and scoring chances 12-6 Leafs in the third period.

There’s a Matthew Good song I quite like.
The Flames played pretty well! They had chances! They made some good plays. But as has become the theme since Darryl Sutter became coach, the mistakes with the smaller details of the game came back to haunt them. One goal was due to a turnover on a bad clear. One was a bad bounce. Two were related to tracking mistakes that allowed Toronto to make some nice passes.

It’s a joint award to the fourth line of Nordstrom, Ryan and Sam Bennett. They were very good.

The Flames entered the third period tied against the top team in their division. But the Leafs bore down and managed to score two quick ones, which for a Flames club that doesn’t score a ton, put this one out of reach.
Advertisement
Ad
Advertisement
Ad

Among players that have gone undrafted since the NHL's Universal Draft era began (1969-present), #Flames captain Giordano is 1 of only 5 defencemen to have hit the 500 career point milestone. Others: Borje Salming (787), Steve Duchesne (752), Dan Boyle (605), Brian Rafalski (515) https://t.co/Omyz0Kmq0V

Sam Bennett played in his 400th NHL game!
Hanifin was on the ice for every Toronto goal.