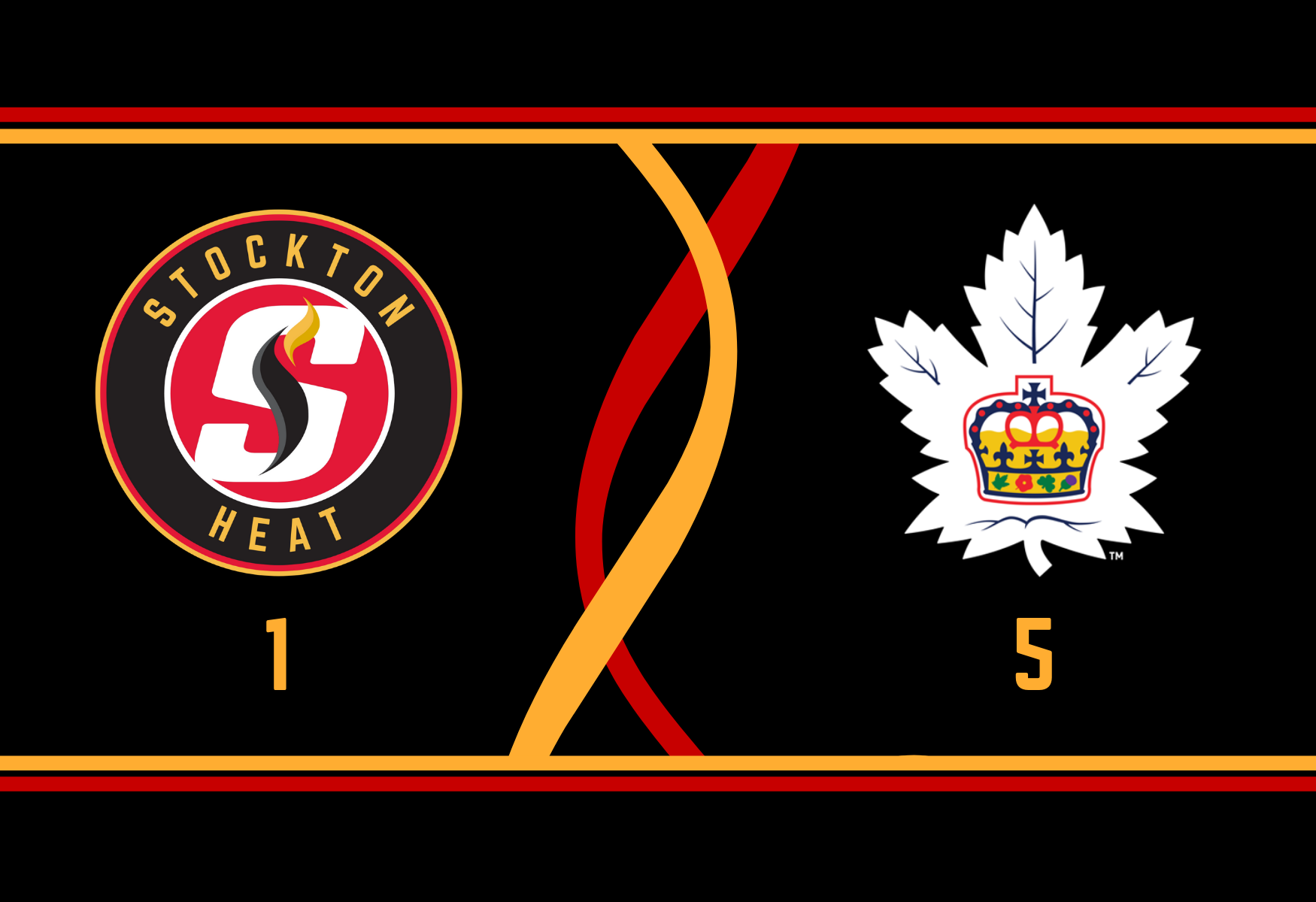 Photo credit: Graphic by Mike Gould
By Mike Gould
1 year ago
Comments
Talk about fancy stats: the “goal horn percentage” through the first two games of the Stockton Heat season sits at a measly 14.3%.
After losing 7-1 to the Toronto Marlies on opening day, Stockton went right back at it against their blue-and-white Canadian Division rivals two days later. The Heat lost 5-1 on Tuesday and have now been responsible for just two of the 13 goals scored in their team’s games.
Unfortunately, the train horn just hasn’t arrived yet for the Heat—and neither has the rest of the train. Both Dustin Wolf and Garret Sparks have struggled to get any sort of rhythm going in the crease and Stockton’s defensemen have displayed a troubling habit of leaking odd-man rushes.
At the other end of the ice, Stockton’s forwards have generated their fair share of chances but they have yet to make Marlies goaltender Andrew D’Agostini look human.
D’Agostini was phenomenal on Sunday, stopping 31 of 32 shots, and he nearly managed to outdo himself on Tuesday. The 27-year-old AHL rookie was impermeable on Stockton’s 19 shots through two periods before allowing a goal early in the third. He eventually made 30 saves on 31 shots for another win over the Heat.
Advertisement
Ad
Advertisement
Ad
Here’s how it all happened.

The Heat had a good final 20 minutes on Sunday, outshooting the Marlies 11-8 and matching them in goals at one apiece.
Unfortunately, they couldn’t continue that momentum into the first period on Tuesday. The Marlies started the game by peppering Sparks with shots and they quickly pounced, with Rich Clune jumping on a big rebound to make it 1-0 just 2:52 into the game.

Clune gets his second of the year (former Heat Jeremy McKenna picks up an assist) pic.twitter.com/hP0aXWX0vq

Adam Ruzicka had a good chance to tie the game at one shortly after Clune’s goal; however, D’Agostini robbed him with a flashy glove save.

D'Agostini makes a terrific save on a Ruzicka shot that may or may not have been heading wide. pic.twitter.com/ob77fDZRaR

Sparks proceeded to allow goals on two of the next four attempts he faced, including the Marlies’ first shot after the opening goal. On that one, Joey Anderson streaked down the wing and sniped a wrister that Sparks got a piece of but not enough; eight minutes later, Joseph Duszak tipped a pass by former Flame Kenny Agostino over the glove of a sliding Sparks.
Advertisement
Ad
Advertisement
Ad

Heat just aren't getting any saves.

Joseph Duszak tips an Agostino pass by Sparks and it's 3-0 Marlies.

The Heat have now allowed 10 goals on 40 shots this year. Shots tied at nine apiece in this one. pic.twitter.com/qFutDXbvY2

The Heat continued to pepper the Marlies’ net with chances. Luke Philp had a shift in the first period where he hit a post before being robbed by D’Agostini with an impressive blocker save.
Nevertheless, the Marlies entered the second period with a 3-0 lead still intact and a 13-10 edge in shots. The visitors quickly added to their score in the middle frame, with Tyler Gaudet making it a 4-0 game on a one-timer from in close.

Things quickly began to Heat up (no pun intended) in the second period, with Flames 2016 sixth rounder Eetu Tuulola getting into a tussle with Leafs 2017 first rounder Timothy Liljegren.

And we have a fight… Eetu Tuulola going at it with Timothy Liljegren in the corner behind D'Agostini. Liljegren slow to get up for the Marlies.

Both players get four each for roughing. pic.twitter.com/u3dveZ4A1b

The testy atmosphere continued to build until a full-fledged fight broke out just past the midway mark of the period. Heat forward Alex Gallant is no stranger to throwing fists and it showed in his bout with Rich Clune.
Advertisement
Ad
Advertisement
Ad

And now Alex Gallant gets into a tilt with Rich Clune. This one's getting testy. pic.twitter.com/Qlwdtve6Om

Once again, the Heat failed to solve D’Agostini in the second, although Philp hit another post and Justin Kirkland missed wide on a breakaway. The Heat out-shot the Marlies 14-6 in the middle stanza.
Finally, the Heat managed to get on the board with their first shot of the final 20, and it came from an unlikely source. 28-year-old winger Alex Gallant has accumulated a total of just eight goals through his six AHL campaigns to date, but he cut the Marlies’ lead to just three goals with a nice wrister that beat D’Agostini’s glove.

Gallant scores on a feed from Simpson. Now just needs an assist for the Gordie Howe. 4-1 Marlies.#AHLHeat #CofRed pic.twitter.com/OaNtdMyNFj

25-year-old centre Mark Simpson played in his AHL debut tonight and registered the primary assist on Gallant’s goal.
After the Heat failed to capitalize on a power-play opportunity midway through the third, the Marlies restored their previous four-goal advantage. Anderson, acquired by the Leafs from the New Jersey Devils in the off-season Andreas Johnsson trade, fired a snapper past Sparks to make it 5-1 late in the game.
Advertisement
Ad
Advertisement
Ad

The third period was a low-event affair and the shots favoured the Heat by a 7-6 count.

Once again, the Heat fell into an early hole film which they simply could not escape. Despite going a perfect 2-for-2 on the penalty kill, they failed to generate much of anything on the power play.
By the time Alex Gallant finally lit the lamp late in the third, it was too late for his team to build upon the goal. They needed to get some saves from Sparks but they didn’t get nearly enough. Through two games, the Heat have now allowed 12 goals on 55 shots, good for a .781 save percentage.

Luke Philp was buzzing all night for the Heat, hitting two posts and forcing Marlies goaltender Andrew D’Agostini to really work to preserve his excellent save percentage.
Advertisement
Ad
Advertisement
Ad
The University of Alberta alumnus now leads all Heat skaters with 20 goals in 54 games dating back to the start of the 2019-20 season.

Tonight’s game was the first of a back-to-back for the Heat; they’ll be playing against the Marlies once again tomorrow at 6:00 p.m. MT. As always, you can catch the game on AHL TV; I’ll be posting updates on Twitter at @miketgould.