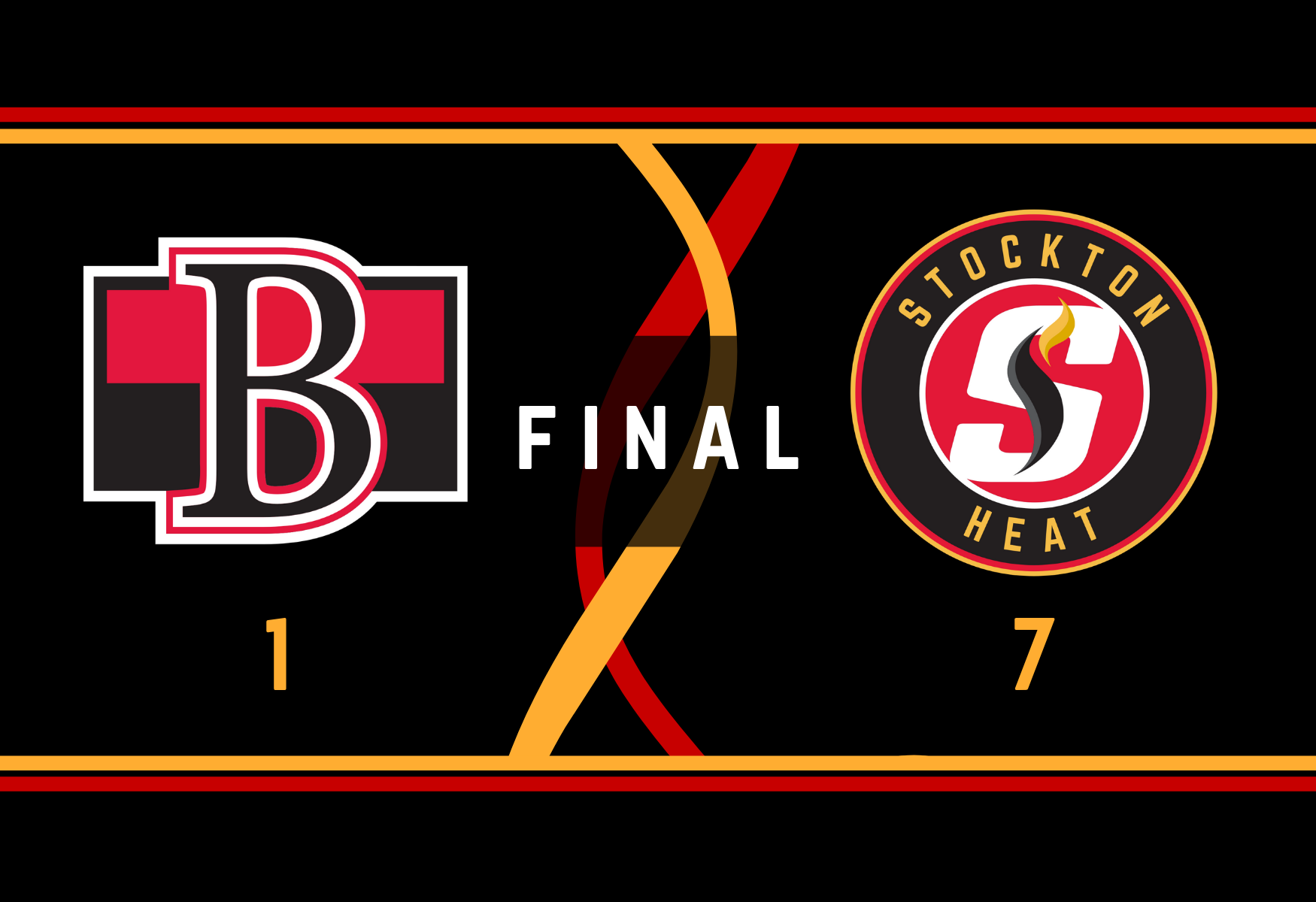 Photo credit: Graphic by Mike Gould
By Mike Gould
1 year ago
Comments
The Stockton Heat have returned to the win column.
The Heat finally managed to get on the right side of a decision on Saturday after losing six consecutive games between Mar. 13 and 26. Fittingly, Stockton beat the Belleville Senators by six goals, taking the Mar. 27 contest by a decisive 7-1 score.
Colton Poolman, Giorgio Estephan, and Greg Moro all scored their first goals as members of the Heat while goaltender Artyom Zagidulin made 34 saves for his third win of the season. Glenn Gawdin, Luke Philp, Connor Mackey, and Byron Froese also tallied for the visitors; Belleville captain Logan Shaw scored his team’s only goal.
With the victory, Stockton improves to 9-7-1 on the season and remains in second place in the AHL’s Canadian Division. Belleville now sits at 5-10-0 and ranks 26th out of the league’s 28 teams with a .333 points percentage.
Advertisement
Ad
Advertisement
Ad

Stockton scored early and often in this game. 25-year-old AHL rookie defenseman Colton Poolman opened the scoring for the Heat just 1:32 into the first period.
Poolman had been out of the Heat lineup since Mar. 11 while dealing with a lower-body injury. His goal was the first of his professional career.

Poolman gives the #AHLHeat a 1-0 lead 1:32 into the first period. pic.twitter.com/RNyl5kRWiB

Speaking of firsts—Giorgio Estephan made it a 2-0 game later in the frame with his first goal of the season (and as a member of the Heat).
The 24-year-old right-handed forward entered Saturday’s game with just two goals and seven points in 22 career AHL contests. He’s been in and out of Stockton’s lineup all season, having played six of a possible 17 games with the team.
Advertisement
Ad
Advertisement
Ad

Estephan (1) from Mackey and Simpson — #AHLHeat take a 2-0 lead. pic.twitter.com/LDHxowkS3p

B-Sens captain Logan Shaw scored the game-winning goal for his team on Friday. He did his part again on Saturday, beating Zagidulin up high with a wrister to make it 2-1.

Fresh off a successful stint with the Ottawa Senators, forward Alex Formenton put his speed and skill on display late in the first in a bid to tie the game.
Formenton beat Zagidulin with a between-the-legs shot but, as the puck trickled towards the goal line, Heat forward Matthew Phillips swept it out of the crease.

Alex Formenton tries to go between-the-legs while shorthanded… he beats Zagidulin but Matthew Phillips sweeps it off the goal line. #AHLHeat pic.twitter.com/ojhczLwoCA

Advertisement
Ad
Advertisement
Ad
After the Senators failed to capitalize, the Heat marched right back and restored their two-goal cushion. This time, Glenn Gawdin sped into the Belleville zone before cutting to the slot and firing a wrister under the blocker of Belleville goaltender Kevin Mandolese.

Gawdin gives the #AHLHeat a 3-1 lead in the final minute of the first period. Ruzicka picks up the helper. pic.twitter.com/yL550a741R

Stockton continued to make the most of its momentum in the second period. After a defensive turnover by Belleville, Heat defenseman Connor Mackey slapped the puck from distance on the left side and fooled Mandolese.
Mackey’s second goal of the year ended up being ruled as “unassisted.”

Looks like Dmitry Zavgorodniy might pick up his first AHL point on this goal by Connor Mackey. #AHLHeat pic.twitter.com/nSc151QjgS

Advertisement
Ad
Advertisement
Ad
Less than two minutes later, Stockton’s defense struck again. This time, Greg Moro beat Mandolese through traffic on the right side for his first professional goal in his third AHL game.
Moro’s tally made it a 5-1 game and chased Mandolese from the Belleville crease. 20-year-old Ottawa 67s alumnus Cedrick Andree replaced him for the rest of the game.

Greg Moro gets his first professional goal! Kris Bennett picks up his first AHL point on the play. It's 5-1 #AHLHeat pic.twitter.com/eeyyt8n5ua

The Heat continued to pile on. Red-hot Luke Philp scored his team-leading seventh goal of the season with six minutes to play in the period, setting up shop in the slot and successfully one-timing a pass from Estephan to make it 6-1.
Advertisement
Ad
Advertisement
Ad
Philp now has five goals and nine points in his last eight games.

Estephan and Kris Bennett pick up the assists. pic.twitter.com/jYj4Jc7AdW

Finally, to end the second period, Heat captain Byron Froese deflected a Moro shot past Andree to give his team a six-goal lead.

They're crediting this one to Froese. Moro and Tuulola pick up the helpers. #AHLHeat pic.twitter.com/knXjhyjDNE

Early in the third period, Heat rookie Dmitry Zavgorodniy had an excellent chance to finally score his first AHL goal. He skated into Belleville’s zone on a two-on-one rush with Emilio Pettersen and looked for the pass all the way before eventually choosing to shoot.
Andree stayed with him and made the stop.
Advertisement
Ad
Advertisement
Ad

Zavgorodniy with an excellent opportunity to get his first AHL goal (and point). Great save by Andree. #AHLHeat pic.twitter.com/Pf33yc6m7t

The Heat ultimately fired 40 shots on Belleville’s net on Saturday and scored on seven of them. Belleville was only successful on one of its 35 shots.

The Heat managed to combine good shot quantity and quality on Saturday and relentlessly tested both Mandolese and Andree. Check out the shot map from Saturday’s game (Belleville is blue, Stockton is orange):
Image from https://theahl.com/stats/game-center/1022564
Look at how many of Stockton’s shots came from the slot or right around the net, compared to Belleville’s more scattered attack.
Zagidulin still had to be sharp and he put forth one of his best performances of the season (and as a member of the Heat). Plus, Stockton received a fantastic showing from one of its top defensemen…

Connor Mackey was the best player on either side in Saturday’s game. He tallied a goal and two assists and led all Heat skaters with a plus-five rating. He narrowly avoided registering an assist on Froese’s goal, too—he would have if Moro’s shot had been left untouched on its way by Andree.
Advertisement
Ad
Advertisement
Ad
Mackey has always been a good defensive player for the Heat but his offensive game is beginning to show major signs of improvement at the professional level. He’s taken 15 shots in his last six games and is up to 10 points in 17 contests on the season.
According to Pick224, Mackey ranks second among all Heat players this season—albeit in a bit of a wonky sample size—with a 65.00% goals-for percentage at even strength. At 24, he’s one of Calgary’s older prospects, but he stands a pretty solid chance of playing more NHL games this season.

The Heat will stay in Ontario for their next two games, taking on the Toronto Marlies at the Coca-Cola Coliseum on Mar. 29 and 31. Note the start time for Monday’s game: 12 p.m. MT. You can catch those games on AHL TV; I’ll be posting updates on Twitter at @miketgould.
Advertisement
Ad
Advertisement
Ad