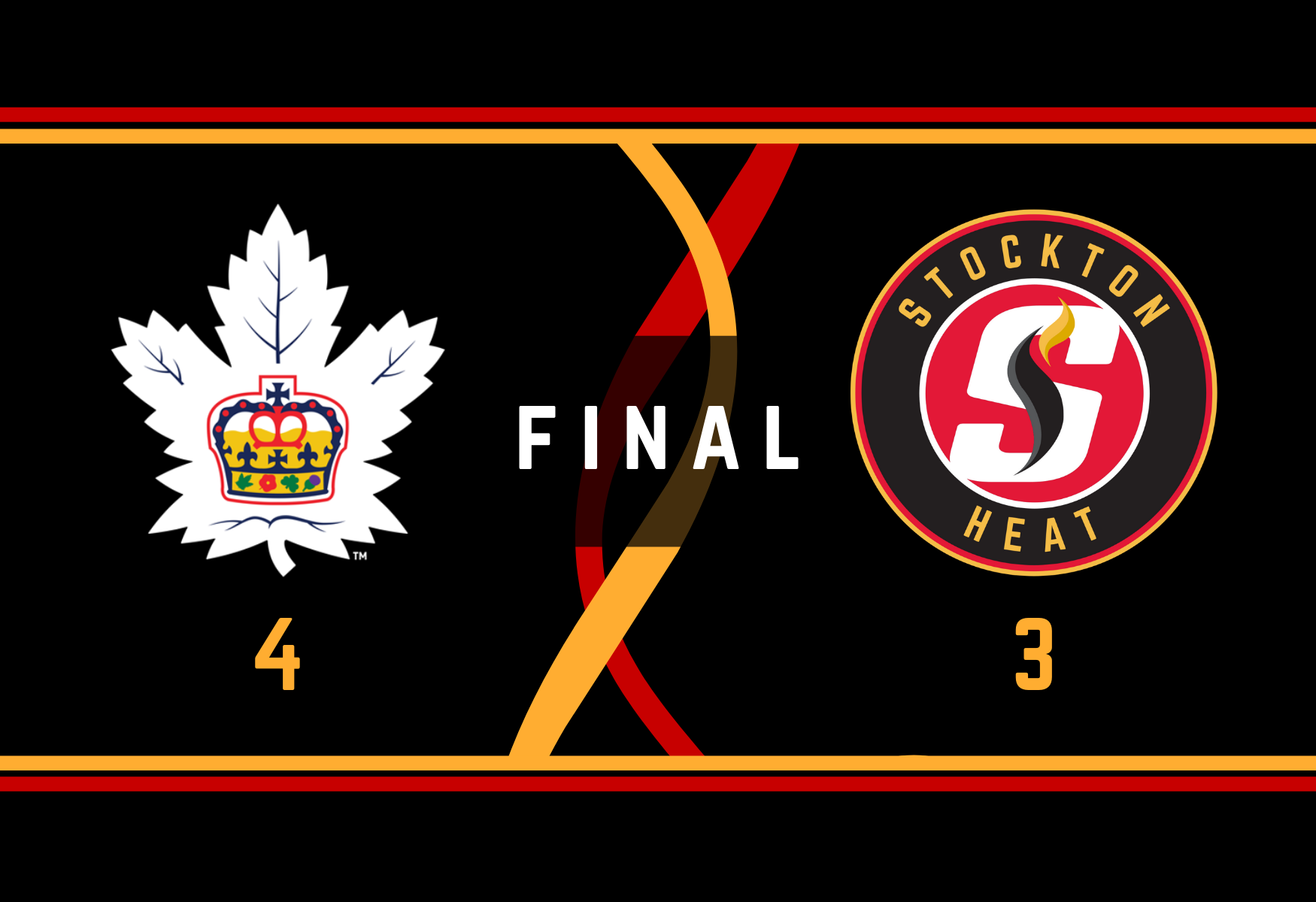 Photo credit: Graphic by Mike Gould
By Mike Gould
1 year ago
Comments
Every time a Calgary Flames game is televised on Sportsnet, the broadcasters always discuss the “Keys to the Game.”
Some nights, they say the Flames need to “play a full 60 minutes” or “start on time.” Other times, the narrative is centred around “creating a playoff atmosphere” or “being physical.”
The Stockton Heat’s streaming broadcasts on AHL TV have never featured such a dedicated “keys” segment. However, it’s fair to say this “Keys” describes Stockton’s trajectory over its last eight games:
If the Heat were represented on a thermometer, the mercury would be “fallin'” fast. Stockton is currently struggling through a 1-6-1 stretch and lost another game on Monday, this time by a 4-3 score to the Toronto Marlies.
Adam Ruzicka, Colton Beck, and Connor Mackey scored for Stockton, which now sits at a 9-8-1 record on the year. Joseph Woll made 21 saves and Adam Brooks scored the game-winning goal for the 9-8-1 Marlies.
Advertisement
Ad
Advertisement
Ad
Now sporting identical records, these two teams will be back at it on Wednesday at 5:00 pm MT.

Nic Petan, who captained Team Canada at the 2015 World Juniors, turned 26 a week ago and opened the scoring for the Marlies on Monday. Petan drove to the net and flicked home the second rebound of a point shot by Riley McCourt.
Former Flame Kenny Agostino picked up the other assist on the goal.

Forwards Emilio Pettersen and Dmitry Zavgorodniy are in the middle of quiet personal stretches of little production, but both players had great opportunities to even the game on the same shift during the first period.

Pettersen with a tremendous individual effort (just misses) before setting up Zavgorodniy for yet another great chance at his first #AHLHeat goal.

Advertisement
Ad
Advertisement
Ad
Heat defenseman Colton Poolman, playing in just his second game after returning from a lower-body injury, decided to fight Marlies enforcer Scott Sabourin late in the first period.
Perhaps Poolman was looking to give his team a spark. Even still, as a fighter, he’s no match for Sabourin.

Stockton managed to get on the board early in the second period—maybe the energy generated by the fight paid off—when Adam Ruzicka slammed home a cross-ice pass from Zac Leslie at the 5:34 mark.
Entering Monday’s game, Ruzicka had not scored a goal since Mar. 5. Seven of his eight goals this season have come at the expense of the Marlies.

Advertisement
Ad
Advertisement
Ad
Timothy Liljegren, the Toronto Maple Leafs’ first-round pick in the 2017 Draft, restored the Marlies’ one-goal lead shortly after Ruzicka’s goal. Liljegren’s second goal of the year came at the end of a dominant offensive-zone shift for the Swedish blueliner.

Quite the shift for Timothy Liljegren leads to a sweet goal for the Marlies. #AHLHeat trail 2-1. pic.twitter.com/1GoLnq1gdP

Later in the middle frame, the Heat had a glorious chance to get their first lead of the hockey game. Marlies rookie Semyon Der-Arguchinstev made the mistake of missing a pass up the middle in his own defensive zone, leading to a grade-A chance in the slot for a forechecking Mark Simpson.
Advertisement
Ad
Advertisement
Ad
Marlies goaltender Joseph Woll was up to the task and slammed the door shut on Simpson’s one-timer.

Der-Arguchintsev gives Mark Simpson a gift of a shorthanded chance.

As an aside — I really like Simpson's game. #AHLHeat pic.twitter.com/pNxlPCntka

Tyler Gaudet broke the deadlock once again for Toronto with 3:06 remaining in the second period. After a failed clearing attempt by Kris Bennett, Gaudet walked down the right side and cut past Connor Mackey towards Artyom Zagidulin, ultimately throwing a quick little snapper underneath the goaltender’s blocker and into the net.

Looked like the Marlies might've had too many men on the ice, here — either way, Gaudet scores a beauty and the #AHLHeat now trail 3-2. pic.twitter.com/yqO9OtFpm1

Advertisement
Ad
Advertisement
Ad
After being victimized on Toronto’s third goal, Mackey capped off the second period with a highlight-reel goal of his own. The 24-year-old defenseman jumped into the rush for the Heat with just over a minute to play and finished off a beautiful three-way passing play also involving Glenn Gawdin and Matthew Phillips.

Mackey took a slashing penalty at the 3:53 mark of the third period, sending the Marlies to their third power play of the game. Toronto was not called for a single infraction during Monday’s contest.
The Marlies wasted no time in capitalizing on the man-advantage, with Der-Arguchintsev setting up Adam Brooks in the slot for his fourth goal of the season.

Advertisement
Ad
Advertisement
Ad
Bennett had a fantastic opportunity to level the score with 12:30 to play in regulation time. After Giorgio Estephan intercepted a pass behind the Marlies’ net, he sent the puck into the slot for a wide-open Bennett. The rookie forward fired the shot towards Woll, who was looking in another direction, but the goaltender managed to get a piece of it and keep it out.

The Marlies outshot the Heat by a 26-24 margin in the game. Stockton fired 13 shots in the middle period but only managed five in the final 20 minutes.

Toronto had four power play opportunities; Stockton had zero. In the end, the Marlies scored the game-winning goal on their third man-advantage of the night. Stockton never had a chance to respond with the extra man.
The Heat were able to drive play at even strength but they also got caught on multiple extended shifts in their defensive zone. They allowed at least three consecutive shots on a shift in all three periods of Monday’s game and allowed the Marlies to take a lot of shots from the slot.
Advertisement
Ad
Advertisement
Ad
Image from https://www.theahl.com/stats/game-center/1022566

Connor Mackey gets the nod for the second game in a row.

#AHLHeat defenseman Connor Mackey tells us he's been given the "green light" from his coaches to jump into the rush, as he did on his goal today.

He said he looked at his stats before this road trip and realized he needed to shoot the puck more. In 3 GP since, he has 12 shots.

Mackey now has goals in back-to-back games and has five points in his last three contests. He was all over Monday’s game in both good and bad ways.
He scored a beautiful goal to tie it at 3-3 and led the team with three shots on goal; he was also on the ice for Toronto’s first three tallies and was in the penalty box for the game-winner.
Advertisement
Ad
Advertisement
Ad
Still, Mackey’s highs in Monday’s game surpassed those of any other member of the Heat. He’s very skilled and is showing more confidence in the offensive zone with every passing game.

The Heat will wrap up their two-game set in Toronto on Wednesday at 5:00 pm MT. You can catch that game on AHL TV; I’ll be posting updates on Twitter at @miketgould.