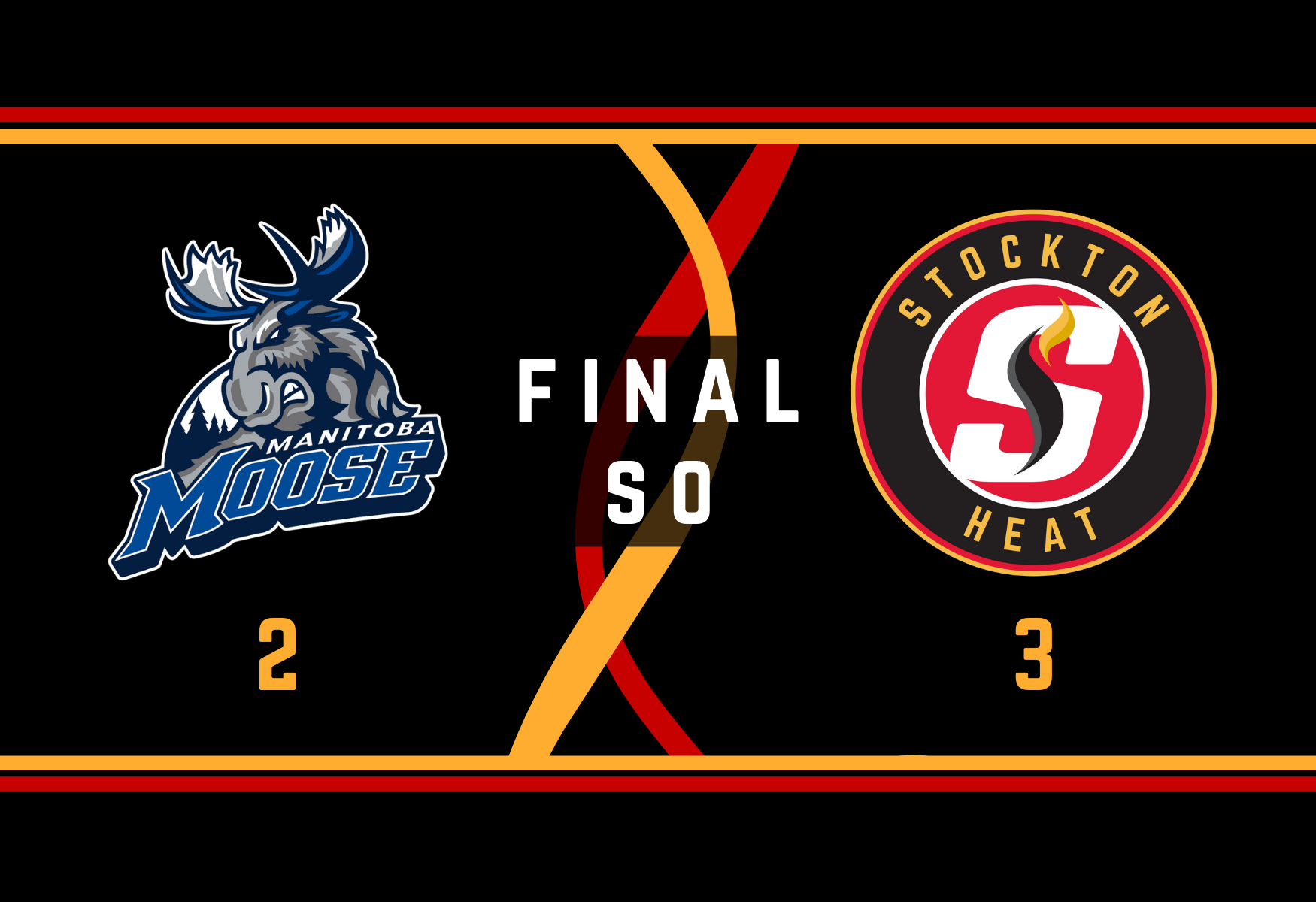 Photo credit: Graphic by Mike Gould
By Mike Gould
1 year ago
Comments
The Stockton Heat are back in the win column!
For just the third time in their previous 18 games, the Heat have exited a game with two points.
Stockton trailed twice in Monday afternoon’s clash with the Manitoba Moose but received goals from Adam Ruzicka and Alexander Yelesin before prevailing in a shootout.
Andrew Shortridge, celebrating his 26th birthday, started in net for the Heat and made 38 saves for his first win of the season.
Nathan Todd and Cole Maier scored for Manitoba, which saw its five-game winning streak come to an end with the loss. Eric Comrie made 26 saves for the Moose.

After registering just 13 shots in the entirety of Saturday’s 3-0 loss to Manitoba, Stockton peppered Comrie with 13 shots in the first period of Monday’s game.
The most dangerous chance came when Matthew Phillips deked around a sprawling Moose defender and into the slot before firing a hard wrister. Comrie made an impressive glove save to keep the score level.
Advertisement
Ad
Advertisement
Ad

Early in the second period, Heat rookie defenseman Yan Kuznetsov took a questionable two-minute interference penalty. Despite Kuznetsov checking a puck-carrying Marko Dano along the boards, he still had to sit at the direction of the officiating crew.

Yan Kuznetsov called for… interference? Well, either way, the #AHLHeat are heading to the PK. pic.twitter.com/E6oL2NU0gh

Manitoba opened the scoring on the ensuing power play. Nathan Todd wired a shot from the left circle over Shortridge’s shoulder, giving the 25-year-old winger his Moose-leading 24th point of the season.

Adam Ruzicka countered with an enormous goal in the dying minutes of the second period. After a nice play along the boards by Eetu Tuulola, the puck found its way onto the stick of Emilio Pettersen.
The Norwegian rookie feathered a saucer pass over to a speeding Ruzicka, who received it in the high slot and placed a perfect shot underneath the crossbar for his 11th goal of the season.
Advertisement
Ad
Advertisement
Ad

Great play by Tuulola along the boards, beautiful pass by Emilio Pettersen to set up a streaking Ruzicka. It's 1-1, late in the second period. #AHLHeat pic.twitter.com/5TXS9gsPB2

Manitoba re-established its one-goal lead shortly after the halfway mark of the final frame. Cole Maier, who now has seven points in his last seven games, deflected a long attempt by Nelson Nogier past Shortridge to give the Moose a 2-1 advantage.

Cole Maier tips a Nelson Nogier shot past Shortridge to give the Moose a 2-1 lead. The #AHLHeat have eight minutes to tie this one. pic.twitter.com/FW0ScYv2Y2

Stockton desperately needed a goal—from anyone.
They got one with exactly five minutes remaining. Alexander Yelesin has never been an offensive-minded defenseman but he managed to come through in Monday’s game with a seeing-eye shot from distance.
Colton Poolman and Adam Ruzicka picked up the helpers on Yelesin’s second goal of the year.

This game went to overtime, where Stockton has beaten Manitoba on two previous occasions this season. Manitoba outshot the Heat by a 3-0 margin in the extra frame but failed to score on any of its opportunities.
Advertisement
Ad
Advertisement
Ad
The Heat advanced to the shootout for the first time this season. Nathan Todd shot first for the Moose, pulling the string on Shortridge and beating him with some filthy stickwork.

Adam Ruzicka shot first for Stockton. He responded by tucking the puck past Comrie on the backhand with his long reach.

Cole Perfetti and Luke Philp shot in the second round. Neither player scored. Jeff Malott kicked off the third round with another missed conversion for the Moose.
Matthew Phillips had a chance to win the game for the Heat in the third round. He made no mistake, sliding the puck right through Comrie’s five-hole to clinch the 3-2 shootout victory.

The birthday boy, Andrew Shortridge, was terrific in his first start of the season. He made 38 saves and stopped two of Manitoba’s most dangerous offensive players—Cole Perfetti and Jeff Malott—in the shootout.
Stockton did a much better job of establishing their offensive attack early in the game and continuing to press in the later periods, although their four-shot output in the final frame left a little to be desired.
Advertisement
Ad
Advertisement
Ad

Adam Ruzicka was the Stockton “Player to Watch” before the game and he delivered, factoring in on both Heat goals in regulation time before scoring in the shootout.
Ruzicka’s new line, with Eetu Tuulola and Emilio Pettersen, was consistently dangerous in Monday’s contest. The trio combined for six shots on goal and three points.

The Heat will continue their season-ending five-game series against Manitoba on Tuesday at 5:00 pm MT. You can catch that game on AHL TV; I’ll be posting updates on Twitter at @miketgould.