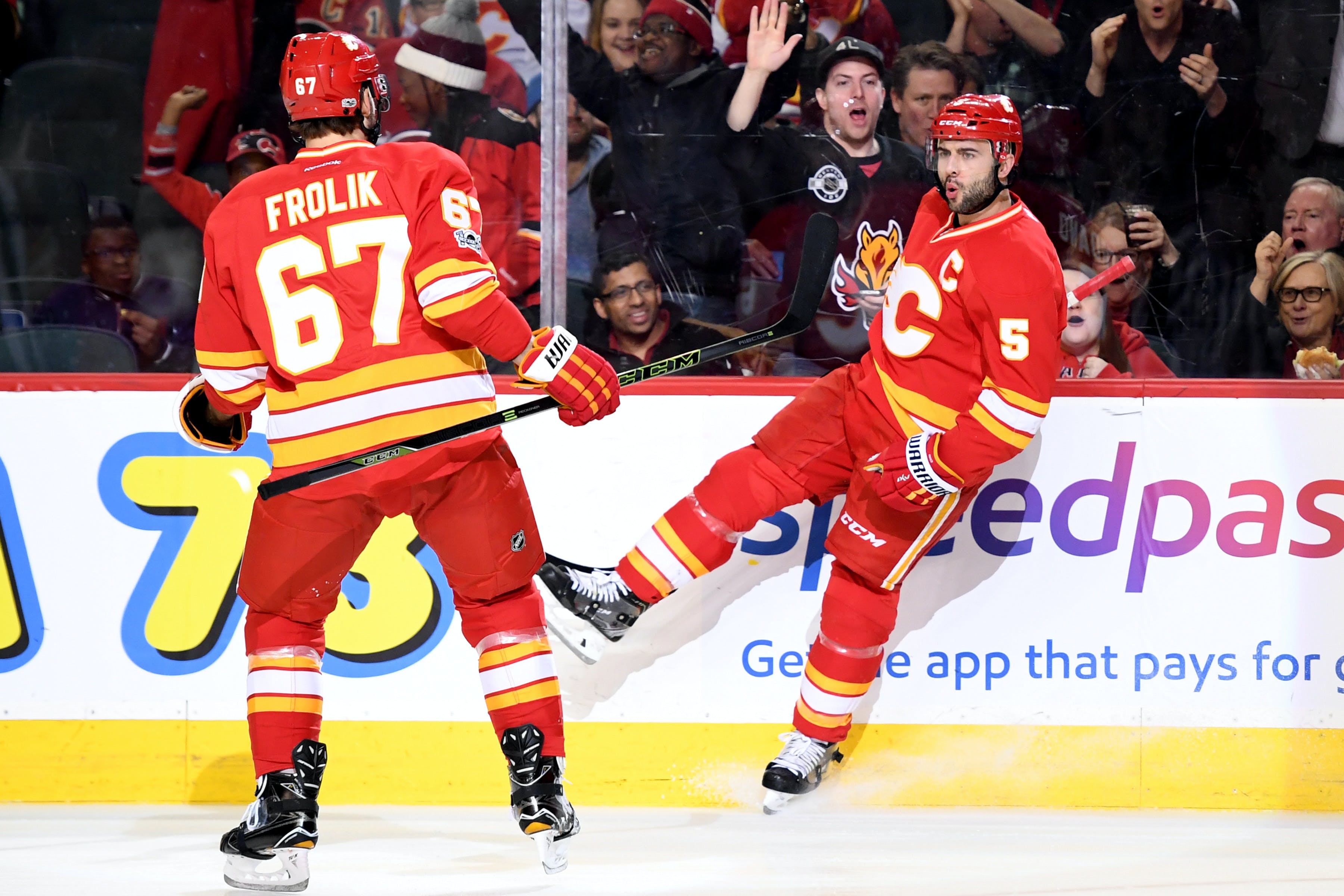 Jeremy Lauzon (Boston Bruins)
While Nick Ritchie is another appealing target from the Bruins, Lauzon is a year younger and can play both sides on the back-end. The 24-year-old rearguard played 41 games in Boston during the 2020–21 season, tallying eight points but contributing -1.0 expected goals above replacement (according to Evolving-Hockey).
Advertisement
Ad
Advertisement
Ad
The 2015 second-round pick is a big and physical player whose game still has room for growth. He averaged 18:43 per game with the Bruins this year, including 3:02 of penalty-killing time.
Will Borgen (Buffalo Sabres)
The Sabres’ list of exposed players is densely populated with overpaid role players, including Kyle Okposo, Cody Eakin, Colin Miller, and Zemgus Girgensons. Jeff Skinner’s laughable $9 million AAV contract is also there for the taking.
Instead of opting for one of those hefty contracts, Seattle will likely take a cheap prospect from Buffalo. Borgen is the obvious choice, being a moderately promising right-handed defenseman and the only player younger than 26 exposed by the Sabres. He’s a pending RFA who shouldn’t cost too much considering his 14 games of NHL experience.
Mark Giordano (Calgary Flames)
Advertisement
Ad
Advertisement
Ad
This one hurts. Giordano has been the Flames’ captain since 2013 and won a Norris Trophy with the team in 2019. He’s right there with Al MacInnis as the best and most accomplished defenseman in franchise history.
He also turns 38 in October and has one year remaining on his contract at $6.75 million. Giordano remains a great defenseman who will likely play top-pairing minutes for the Kraken. Maybe they name him team captain; maybe they flip him for draft picks. Either way, Giordano’s selection in the expansion draft seems like a foregone conclusion.

From our pal @frank_seravalli on the DFO Rundown, regarding Mark Giordano and the Seattle Kraken:

"I think it's almost definitely Mark Giordano. In fact, I believe that Seattle has given Calgary an indication that they will indeed take Mark Giordano."#Flames

Advertisement
Ad
Advertisement
Ad
Jake Bean (Carolina Hurricanes)
Bean could join Julien Gauthier as the second Hurricanes first-round pick from 2016 on the first Kraken roster. Carolina inexplicably exposed Bean instead of the overpaid and generally ineffective Brady Skjei, opening the door for Seattle to add a 23-year-old defenceman who could be a cornerstone of their back-end for years to come.
In 2019–20, Bean scored 48 points in 59 AHL games with the Charlotte Checkers. He spent the entire 2020–21 campaign in the NHL, playing 42 games with the Hurricanes and scoring 12 points (including his first NHL goal). The former Calgary Hitmen star averaged 14:32 per game last season and is set to become an RFA on July 28.
Nikita Zadorov (Chicago Blackhawks)
According to St. Louis Blues beat reporter Andy Strickland, the Kraken are “likely” to select Zadorov from Chicago. ‘Hawks general manager Stan Bowman reportedly tried — and failed — to move the 26-year-old defenseman before Saturday’s roster freeze.
Advertisement
Ad
Advertisement
Ad
Zadorov is a big and physical defensive presence who is largely incapable of driving offence. He contributed a career-high 5.2 defensive expected goals above replacement at even-strength in 2020–21 (although, according to Evolving-Hockey, he struggled mightily on the penalty-kill); with -2.6 offensive xGAR, he was the 38th-worst offensive play-driver in the entire NHL.
While he’s certainly capable of helping his team prevent chances, Zadorov’s complete lack of offensive ability has, thus far, more than offset his defensive value. With Adam Gaudette and Calvin de Haan also available from Chicago, it’s unclear why Seattle is reportedly keen on selecting Zadorov. He’s a pending RFA with arbitration rights and a required qualifying offer of $3.2 million.
Troy Stecher (Detroit Red Wings)
Stecher is a mobile two-way defenceman who shoots right and scored 11 points (three goals, eight assists) in 44 games with the Red Wings in 2020–21. The former Vancouver Canuck hails from Richmond, BC and has been a positive-impact player for years.
Advertisement
Ad
Advertisement
Ad
With one year remaining on his reasonable $1.7 million contract before he becomes an unrestricted free agent, Stecher could be an appealing pump-and-dump target for the Kraken. He provided the Wings with 4.2 expected goals above replacement in 2020–21.
Cale Fleury (Montreal Canadiens)
Montreal has plenty of interesting options available, including expensive franchise goaltender Carey Price. We figure Seattle might be scared away by Price’s impending medical procedures; instead, they’ll likely opt to select a defenseman from the 2021 Stanley Cup finalists.
Shea Weber, Brett Kulak, and Cale Fleury are all on the Canadiens’ list of exposed players. Weber is Montreal’s captain but he carries a problematic contract of his own and also has worrying health issues to deal with; Kulak has been a good influence on Montreal’s back-end but is a year away from UFA and turns 28 next January.
Advertisement
Ad
Advertisement
Ad
That leaves Fleury as the most likely choice. The 22-year-old right-shot defenseman appeared in 41 games for the Canadiens in 2019–20, amassing -1.2 xGAR, before spending the 2020–21 campaign in the AHL with the Laval Rocket.
P.K. Subban (New Jersey Devils)
Talk about a swing for the fences. Subban, 32, has not been particularly effective since being a Norris Trophy finalist with the Nashville Predators in 2017–18 and he posted a career-worst -1.2 xGAR with the Devils in 2020–21.
Nevertheless, Subban is extremely marketable and has just one year remaining on a contract paying him $9 million per season. At his best, he was an electrifying presence on the blue-line capable of driving play at both ends of the ice. He’s immensely likeable and could be a massive help off the ice as the Kraken grow a fanbase.
Advertisement
Ad
Advertisement
Ad
If Subban finds new life in Seattle, he could be a game-changer for the brand-new franchise. If it doesn’t work, his contract is up in 2022. This one should be a no-brainer.
Justin Braun (Philadelphia Flyers)
Braun is a no-nonsense right-handed defensive defenceman who comes at a relatively low price. Signed for next season at just $1.8 million, Braun would undoubtedly be a very attractive trade chip for Seattle to use down the road.
If Braun were to suit up for the Kraken, he could be an ideal partner to help along a young player like Bean or Lauzon. He was effective in his middle-pairing role for the Flyers last season, averaging 18:32 per game and collecting 2.4 xGAR in 53 contests.
Dylan DeMelo (Winnipeg Jets)
The Jets inexplicably used DeMelo sparingly in 2020–21, deploying him for an average of 16:58 per game despite his track-record of good results at both ends of the ice.
Advertisement
Ad
Advertisement
Ad
With three years remaining on his contract at an AAV of $3 million, the 28-year-old DeMelo would become Seattle’s longest-signed rearguard. According to Evolving-Hockey, he provided the Jets with $6.8 million of value last season. While he’s capable of being a two-way defender — he scored 42 points in 140 games between the 2017–18 and 2018–19 seasons — DeMelo has been used (and has thrived) in Winnipeg as a shutdown type.

Chris Driedger (Florida Panthers)
Assuming the Kraken pass on selecting Carey Price from Montreal, Driedger will likely be Seattle’s first starting goaltender. The former Calgary Hitmen star is reportedly closing in on a three-year deal worth approximately $10.5 million with the NHL’s latest expansion team.
Advertisement
Ad
Advertisement
Ad
Driedger emerged as one of the top backup goaltenders in the NHL with the Panthers in 2019–20, posting a 7-2-1 record in 12 games to go along with a .938 save percentages. The 27-year-old had another great year in 2020–21, going 14-6-3 with a .927 before appearing in three playoff games.
Kaapo Kahkonen (Minnesota Wild)
It was a little surprising when the Wild announced they had exposed Kahkonen in favour of 34-year-old Cam Talbot. While Talbot has certainly played well in Minnesota after having a renaissance year with the Flames in 2019–20, he’s also a decade older than Kahkonen and is two years away from becoming an unrestricted free agent.
Kahkonen was named to the AHL’s first all-star team in 2020 after posting a 25-6-3 record and a .927 save percentage with the Iowa Wild. The 24-year-old spent the 2020–21 season as Talbot’s backup in Minnesota, winning 16 of his 24 games while recording a middling .902 save percentage.
Advertisement
Ad
Advertisement
Ad
Despite his unspectacular rookie season, Kahkonen is a very promising young goaltender who could quickly make the Wild regret exposing him.
Connor Ingram (Nashville Predators)
Ingram is a two-time AHL all-star game participant who remains one of the most talented goaltending prospects in hockey despite a challenging 2020–21 season. After being traded to Nashville by the Tampa Bay Lightning in 2019, Ingram responded by posting a 21-5-5 record and a .933 save percentage with the AHL’s Milwaukee Admirals.
During the 2020–21 campaign, Ingram spent time in the NHL’s player assistance program. When active, he played nine games in Sweden’s second-tier professional league before returning to the AHL for five contests with the Chicago Wolves. He went 5-4-1 with an .898 save percentage in the AllSvenskan league before going 1-3-1 with an .899 in Chicago.
Advertisement
Ad
Advertisement
Ad
Ingram, 24, was a third-round pick of the Lightning in 2016. He has a long history of excellent results in the crease and possesses the talent to be a difference-maker in the NHL.
Vitek Vanecek (Washington Capitals)
Vanecek spent the majority of the season between the pipes for the Capitals while Ilya Samsonov missed significant chunks of time. The 25-year-old appeared in his first 37 NHL games during the 2020–21 season, posting an impressive 21-10-4 record to go along with a .908 save percentage.
Signed through the 2021–22 season at a mere $716,667, Vanecek is another no-brainer pick for the Kraken. He’s a good, cheap, young goaltender with boatloads of potential; plus, he’ll be a restricted free agent when his current contract expires.