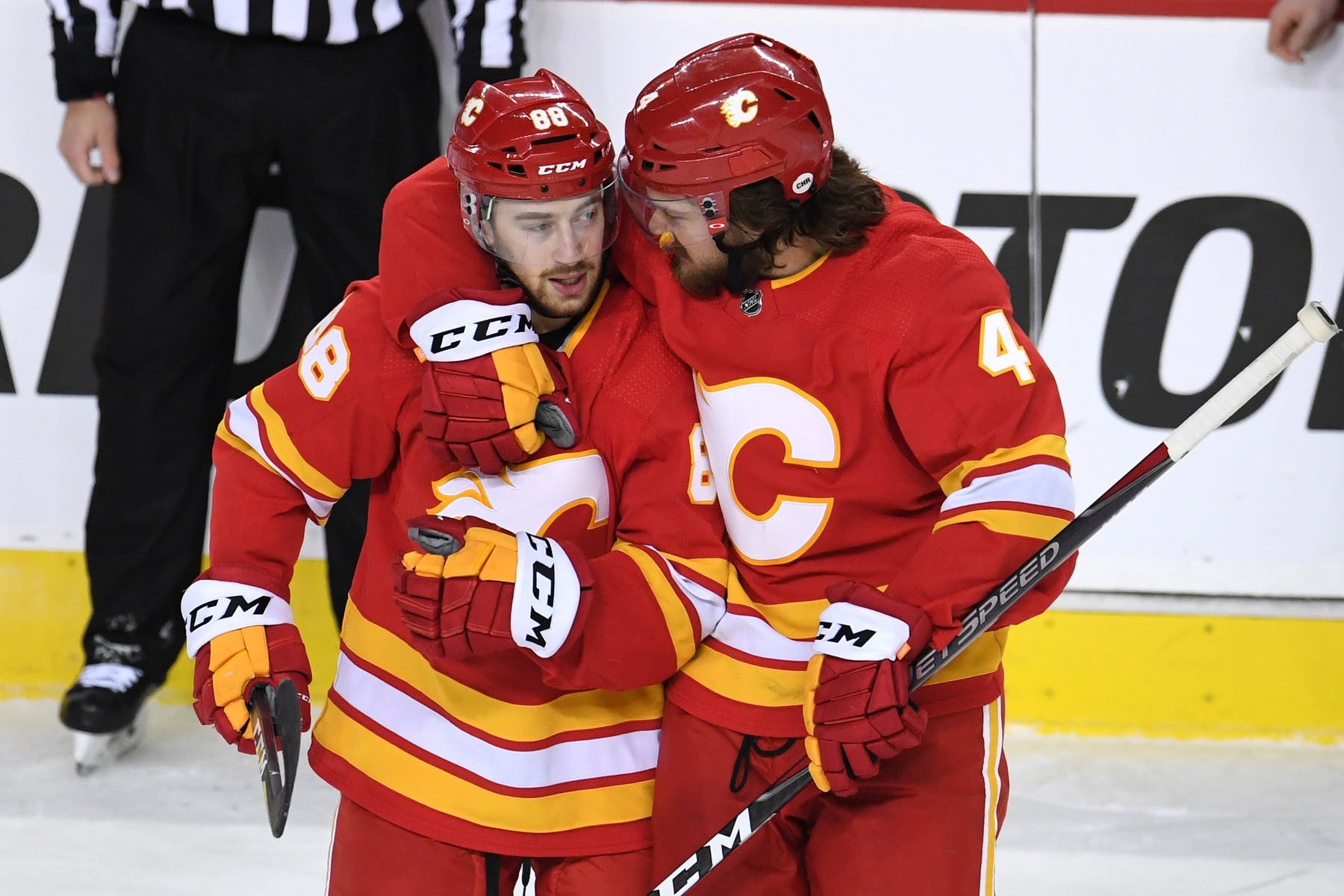 Photo credit: Candice Ward/USA Today Sports
By Ryan Pike
2 years ago
Comments
For the first time since July, the Scotiabank Saddledome played host to organized hockey on Thursday night. Sure, it was a scrimmage between the two halves of the Calgary Flames training camp crew, but it was something.
Team McDonald defeated Team Iginla by a 5-2 score.

Team McDonald’s Joakim Nordstrom, playing on the de facto fifth line, opened the scoring. Off a broken play in the neutral zone, he walked in on Jacob Markstrom. Alex Petrovic attempted a sliding block, but Nordstrom waited him out and beat Markstrom short-side to make it 1-0 McDonald.

Team Iginla answered back a while later off a dandy three-on-two passing play between Luke Philp, Adam Ruzicka and Emilio Pettersen, finished off by Pettersen. (Poor Alexander Yelesin and Colton Poolman seemed overwhelmed by it.) That made it 1-1.

But before Beasley had a chance to announce that goal, Sean Monahan bunted a Juuso Valimaki point shot past Markstrom to give McDonald a 2-1 lead after the opening period.

Team McDonald takes a 2-1 lead into the first intermission! pic.twitter.com/a9GStRxq3h

Team Iginla’s Andrew Mangiapane tied it up early in the second period. Petrovic’s pass across the neutral zone was tipped at the blueline by Mikael Backlund, allowing Mangiapane a clear lane to the net. He beat David Rittich high with a quick shot to tie the game at 2-2.
Advertisement
Ad
Advertisement
Ad

🍞 with snipe to even things up for Team Iginla? Yep! pic.twitter.com/Lvt8eeWxA0

But Team McDonald answered back later in the second. Josh Leivo collected a Yelesin rim-around behind the net. He waited and teed up a pass for Matthew Tkachuk, who powered the puck past Markstrom to make it 3-2 McDonald after two periods.

Team McDonald is heading into the third period with a 3-2 lead thanks to Chucky! pic.twitter.com/kNW2xByDnr

Rasmus Andersson made it 4-2 for Team McDonald off a broken play in the Iginla zone. He saw the puck free, pinched to grab it, and took advantage of a general state of confusion by beating Markstrom with a slick wrap-around.
Team Iginla pressed and sent out the extra attacker, but Nordstrom scored an empty-netter (from the defensive blueline) to make it 5-2 McDonald.
Markstrom (Iginla) and Rittich (McDonald) went the distance in net.

We’ll focus on the NHL (and adjacent) bodies. With Sam Bennett (precautionary) out for Team Iginla, we saw a few shuffles on his team throughout the game.
Advertisement
Ad
Advertisement
Ad
For Team Iginla: Mangiapane, Backlund and Derek Ryan were consistent in the first, with Glenn Gawdin taking spins with Milan Lucic and Dillon Dube. In the second, Mangiapane and Backlund were with a rotating winger and Lucic and Dube were put with Ryan. Defensive pairs began with Mark Giordano/Chris Tanev and Connor Mackey/Michael Stone, then went Giordano/Stone and Mackey/Tanev.
For Team McDonald: Tkachuk and Elias Lindholm started with Dominik Simon and ended with Leivo. Johnny Gaudreau and Monahan began with Leivo and ended with Simon. Defensive pairs began with Noah Hanifin/Andersson and Valimaki/Nikita Nesterov, then went Hanifin/Nesterov and Valimaki/Andersson.

It’s January and these guys haven’t – for the most part – played an organized game since August. But a few players jumped off the proverbial page: Lindholm Dube, Mangiapane, Leivo and Nordstrom were the best “NHL” forwards, while Tanev, Valimaki and Andersson were impressive on the blueline. (Matthew Phillips and Pettersen were pretty good among the non-NHL bodies.)
Advertisement
Ad
Advertisement
Ad
Nobody looked awful – Markstrom had to deal with a bit of traffic and overall defensive confusion on a couple of his goals – though Gaudreau did on a few occasions try to dangle his way into the offensive zone only to be greeted with a poke check or a human body blocking his way.

There’s an off day tomorrow at camp. They’re back at practice on Saturday morning and scrimmage on more time on Monday before final cuts on Tuesday.