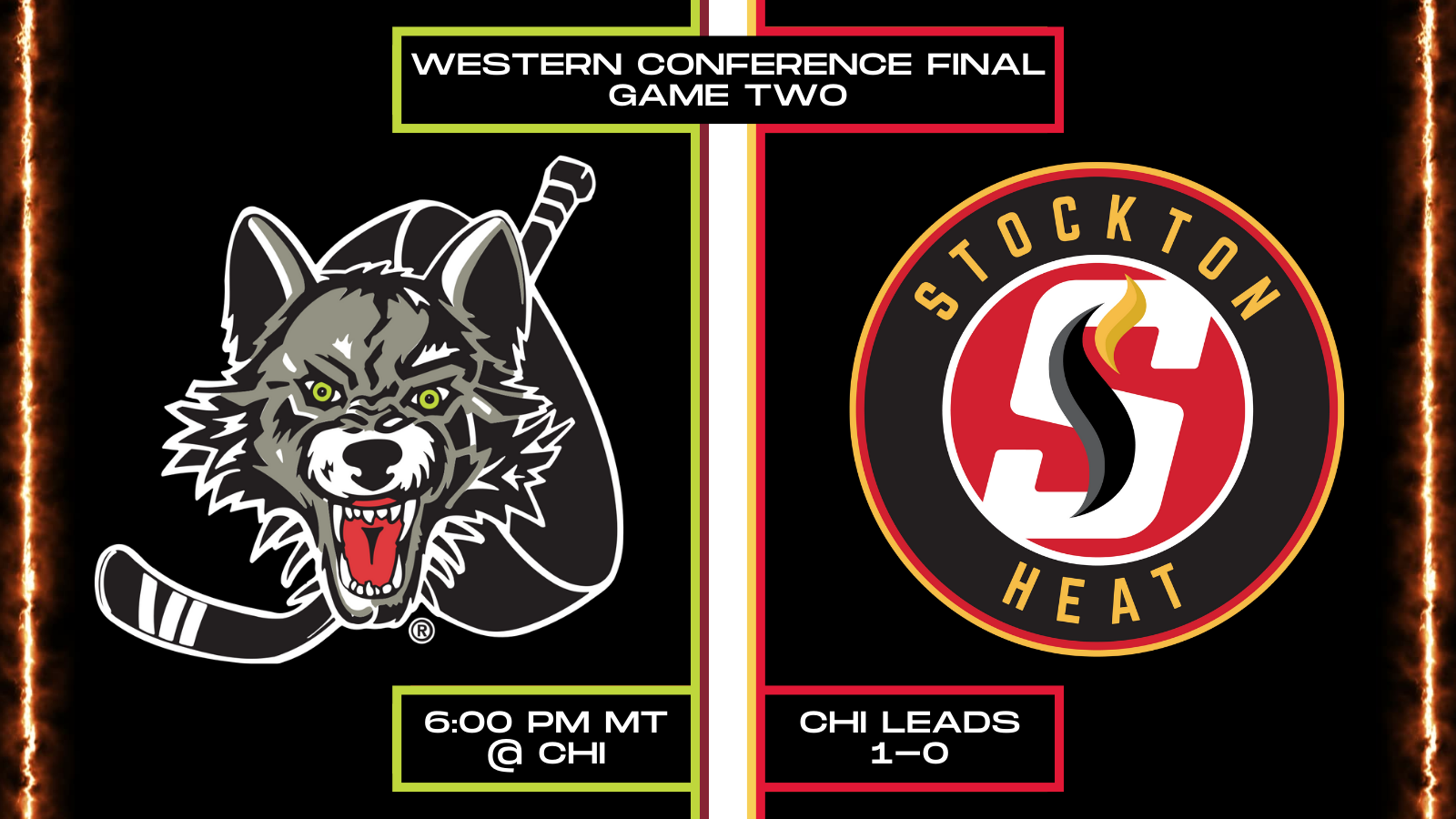 Photo credit: Graphic by Mike Gould
By Mike Gould
7 months ago
Comments
The Stockton Heat gave it all they had but lost 5–4 in overtime against the Chicago Wolves in Game 1 of the AHL Western Conference Final last Friday. They’ll have a chance to even the series in Game 2 at 6:00 p.m. MT on Monday.
Game 1 was a back-and-forth affair that saw Chicago lead 1–0, Stockton lead 3–1, and Chicago lead 4–3 before Heat rookie @Connor Zary scored his first American Hockey League playoff goal to tie the game late in the third period.

No bad time for a first playoff goal, but this one was extra not bad. pic.twitter.com/Iv9pBHjENT

Wolves forward @Jamieson Rees ultimately scored the overtime winner to put Stockton down 1–0 in the best-of-seven series.
Zary, @Eetu Tuulola, @Walker Duehr, and @Luke Philp scored for the Heat in Game 1. Monday’s Game 2 will take place in Chicago before the series shifts to Stockton for Games 3, 4, and (if needed) 5.
Both of Stockton’s losses in these playoffs have come on the road in overtime. This is the first time the Heat have trailed in a series this year, although it’s also the first series where they haven’t enjoyed home-ice advantage: Chicago was the only team to finish ahead of Stockton in the 2021–22 AHL standings.
Advertisement
Ad
Advertisement
Ad
Heat goaltender Dustin Wolf made 35 saves on 40 shots faced in Game 1. At the other end of the ice, Alex Lyon allowed four goals on 28 shots.

Luke Philp has officially arrived in the 2022 Calder Cup Playoffs.
The 26-year-old centre sniped his first career AHL playoff goal past Alex Lyon to bring Stockton even with Chicago midway through the first period of Game 1.
Philp entered the game with three assists in seven games but was one of a small handful of Stockton regulars still searching for a playoff goal.
Not anymore.

(Connor Zary was another one of those Heat players still looking for a goal in these playoffs. As you saw above, he came through in a big way late in the game).

Game 2 in Chicago will be broadcast on AHL TV (subscription required) and on Spreaker (audio only), with the opening puck-drop set for 6:00 p.m. MT.
Advertisement
Ad
Advertisement
Ad
FlamesNation contributors Paige Siewert and Mike Gould will provide live game updates on Twitter. Additionally, you’ll be able to follow along at TheAHL.com.