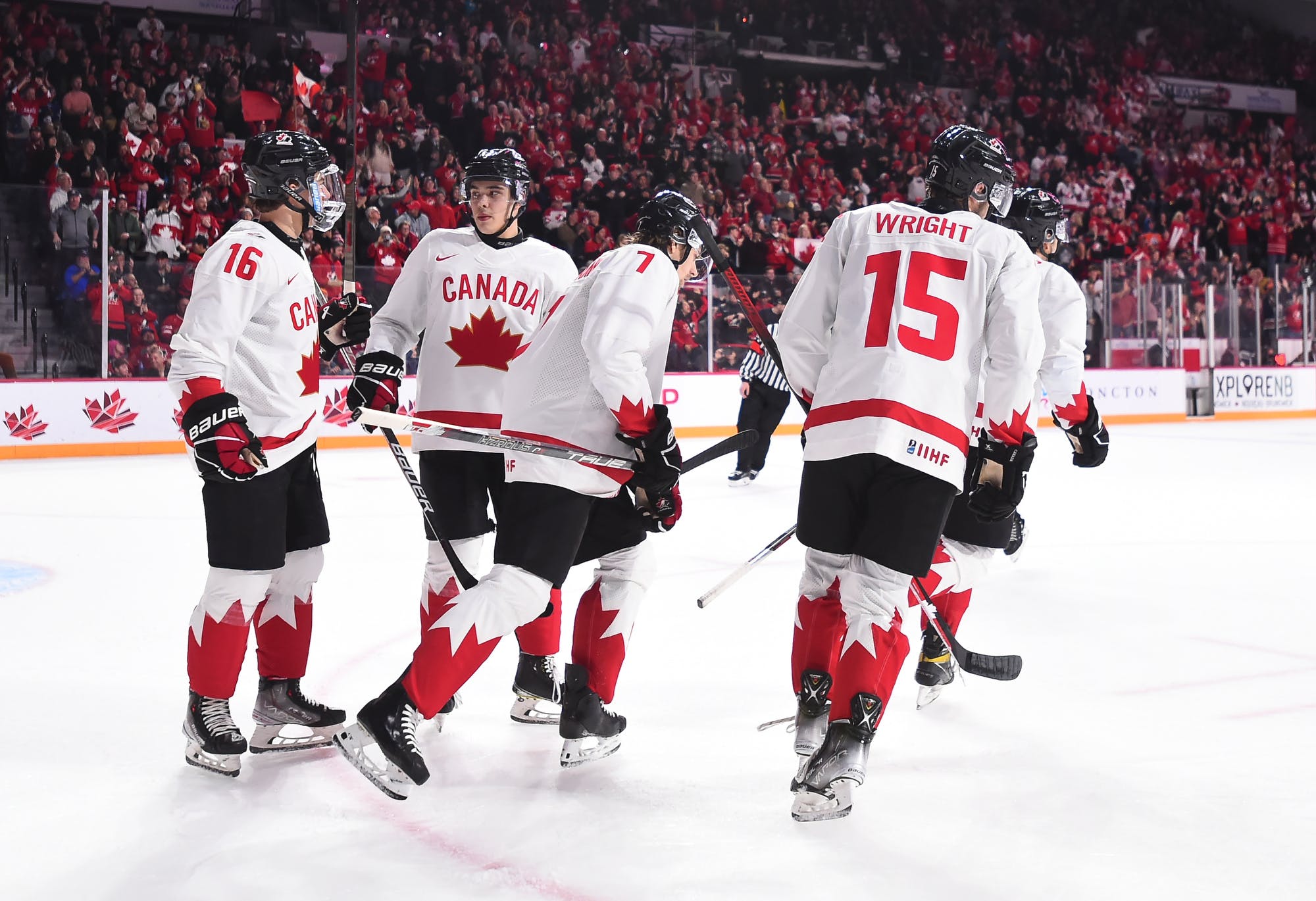 Photo credit: Matt Zambonin/IIHF
By Mike Gould
1 month ago
Comments
Connor Bedard continued doing Connor Bedard things as Team Canada rolled over Team Austria by an 11–0 score at Scotiabank Centre in Halifax on Thursday evening.
The 17-year-old phenom led the way with two goals and six points in the blowout win. In doing so, he tied Jordan Eberle’s long-standing record for most career goals by a Canadian player at the IIHF World Junior Championship.
Bedard now has a staggering six goals and 14 points in just three games at the 2023 tournament.

Connor Bedard has tied Jordan Eberle's Canadian record for most goals at the #WorldJuniors with 14 🇨🇦 pic.twitter.com/l4czCNerec

At this point, it already feels like you can safely pencil in a meteoric rise for whichever team is lucky enough to select Bedard with the No. 1 pick at the 2023 NHL Draft. But he’s not the only Canadian forward who looked mighty impressive against Austria.
Logan Stankoven (DAL) was arguably the second-best player on the ice all night, amassing four points (one goal, three assists) and going 15-for-17 in the faceoff dot.
Advertisement
Ad
Advertisement
Ad
As seen above, the 2021 second-rounder made an incredible play right off a draw in the offensive zone to push the puck forward and set up Bedard for his record-tying goal. It’s starting to look more and more like Stankoven should’ve been a gimme of a first-round pick two drafts ago.
Playing in his first game since the disaster against the Czechs on Boxing Day, Canadian goaltender Benjamin Gaudreau (SJ) held the fort for a 12-save shutout. Only two Canadian skaters — Kevin Korchinski (CHI) and Caedan Bankier (MIN) — failed to record a point in the game.
Both the Calgary Flames’ prospects at the tournament were in action on Thursday, with William Stromgren making more of an impact than he did when he was essentially a healthy scratch against Germany on Tuesday.
Advertisement
Ad
Advertisement
Ad
Stromgren logged 13:44 in the game and helped force a turnover that led to the Swedes’ first goal against the Czechs. After being pressured by Stromgren, Czech defenceman Tomas Hamara (OTT) put the puck on a platter for Fabian Wagner (WPG), who whistled a wrister past Tomas Suchanek. Sweden ultimately defeated Czechia 3–2 in overtime.

Fabian Wagner capitalizes off the turnover to tie the game 🚨#WorldJuniors pic.twitter.com/Y5WwuCCuJJ

Fellow Flames prospect Topi Ronni still has yet to record a shot on goal at this tournament, but he went 4-for-7 in the dot and logged 12:14 on Thursday as Finland defeated Latvia by a 3–0 score.
Finally, the Logan Cooley (AZ) show was on in full force as Team USA emerged with a 5–1 victory over the Swiss. Cooley set up University of Minnesota linemate Jimmy Snuggerud with a beautiful behind-the-back pass for the Americans’ first goal before scoring one of his own off a near-identical feed by Rutger McGroarty.
Advertisement
Ad
Advertisement
Ad

McGroarty to Cooley WHAT A GOAL. 🚨 #USAHockey
pic.twitter.com/N5ENHME8JH