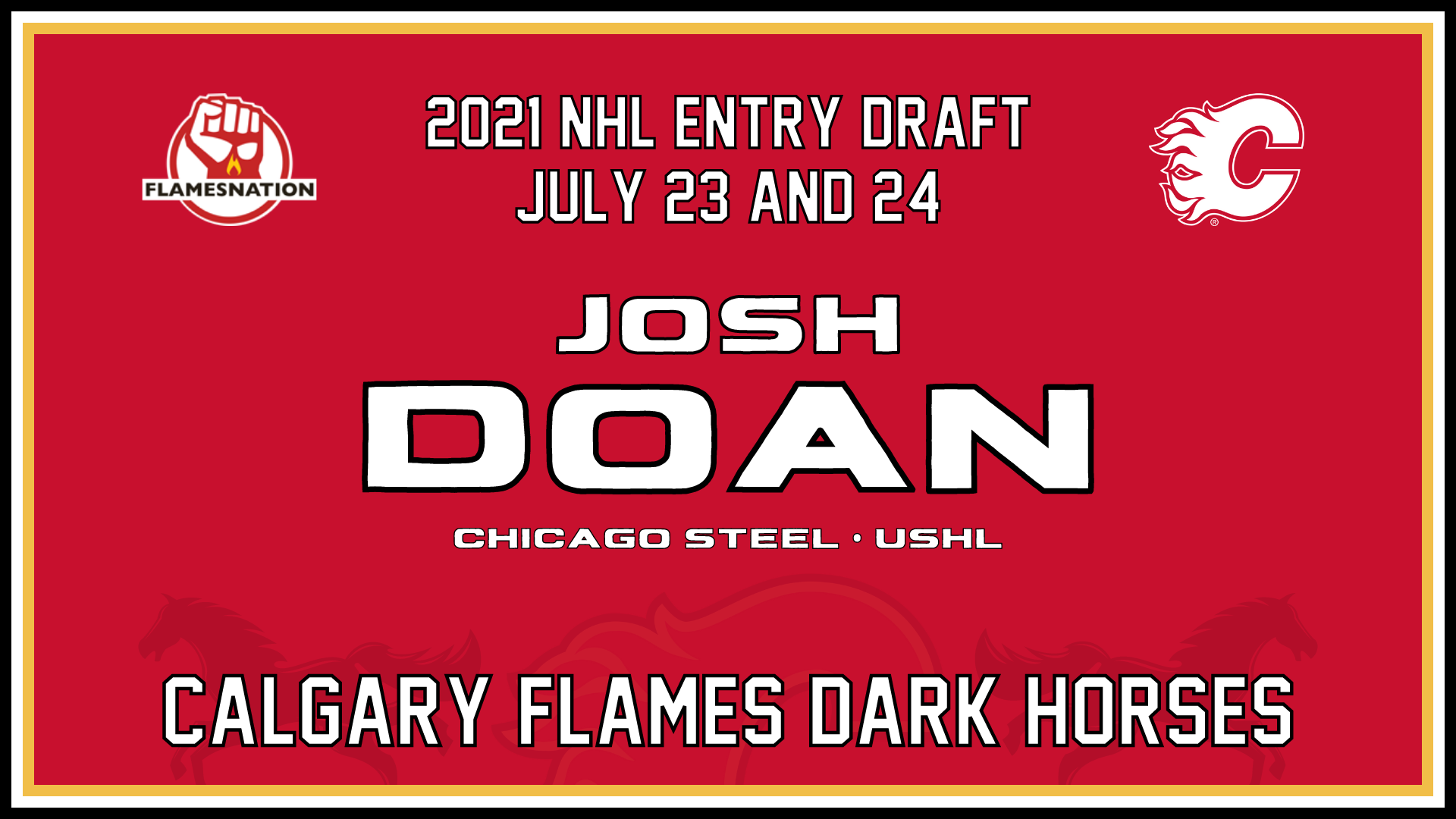 Photo credit: Graphic by Mike Gould
By Mike Gould
1 year ago
Comments
Rounds two through seven of the 2021 NHL Entry Draft will take place on July 24, 2021. The Calgary Flames currently possess a total of six picks in those rounds, having acquired the Edmonton Oilers’ third-round selection before trading their own fourth to the Los Angeles Kings. In this “Draft Dark Horses” series, our team of writers will evaluate some of the notable prospects projected to be available in the later rounds of the draft.
Josh Doan is a second-year eligible prospect who forced his way into the 2021 draft conversation with a breakout offensive performance last season. Much like his dad, former Coyotes captain Shane Doan, Josh is a big right-shooting winger who plays an energetic game.

After coming up through the Phoenix Jr. Coyotes developmental system, Doan entered the United States Hockey League as a draft-eligible 17-year-old in the 2019–20 season.
In his debut turn with the Chicago Steel, Doan noticeably lagged behind the play at times and seldom got into dangerous positions to use his impressive shot. Ryan Wagman elaborated in Doan’s profile in McKeen’s Magazine, published on July 7:

…the young Josh Doan saw his career prospects take a huge leap in his second year in the USHL with the Chicago Steel. An anonymous player whose game couldn’t match his name in his rookie year – also his first year of draft eligibility – he exploded last year, thanks to improved foot speed, improved skills, and the willingness to use both aggressively. Looking now like a good bet to be the first re-draft candidate selected this summer, Doan has middle six upside at the highest level, which could not be said with a straight face even 12 months ago.

Future Considerations describes Doan in its 2021 draft guide (order it here) as a winger with a high hockey IQ who “is constantly making smart plays in all three zones of the ice.”
Advertisement
Ad
Advertisement
Ad

His smart positioning and anticipation make his game easily projectable to the next level. He doesn’t need much time or space to get a quick and accurate shot on net while under pressure, being able to receive the puck well, even when the pass is off target. He’s able to get into great position for scoring chances in the slot with his tenacious drive and ability to get into high-danger areas. He knows how to find open space efficiently, getting to the slot for high scoring chances often. He has quick hands that make him effective at skating through traffic with good control, making him strong at offensive zone entries.

In 2019–20, Doan scored just five goals and added nine assists in 45 games with the Chicago Steel. While his teammates Matthew Coronato and Owen Power — both a year younger — posted 40-point seasons, Doan averaged just 10:37 of ice time (according to Pick224’s estimates) in his draft season.
Doan took only 53 shots in 45 games and scored 1.26 primary points-per-60, good to rank 13th on the Steel. Understandably, all 31 teams passed on the opportunity to draft Doan in 2020.
2020–21 brought a massive change of fortunes for Doan. His ice-time jumped dramatically to 18:29 per game and he responded by firing 116 shots in 53 games. Doan finished fourth in the USHL with 31 goals, adding 39 assists (third-most in the USHL) for a total of 70 points (also third).
Advertisement
Ad
Advertisement
Ad
Chicago outscored its opponents by a 71-47 margin during Doan’s shifts at even-strength in 2020–21. Without him, they scored 117 goals and allowed 95. Doan posted a +4.98 relative goals-for percentage at 5-on-5 last year.
Doan ranked 10th in the entire USHL with 3.12 primary points per 60 at 5-on-5 during the 2020–21 season. For reference, projected 2021 first-round pick Cole Sillinger placed 11th with 3.11 P1/60.
Of note: Chicago’s lineup featured the USHL’s four top scorers. Doan typically played on a line with Sean Farrell, who led the entire league with 101 points in 53 games.

I think Josh Doan makes for a really intriguing over-age draft target but it's also important to keep this in mind. This is the USHL top-5 scoring leaderboard from 2020–21. pic.twitter.com/dQ1oYlfZE9