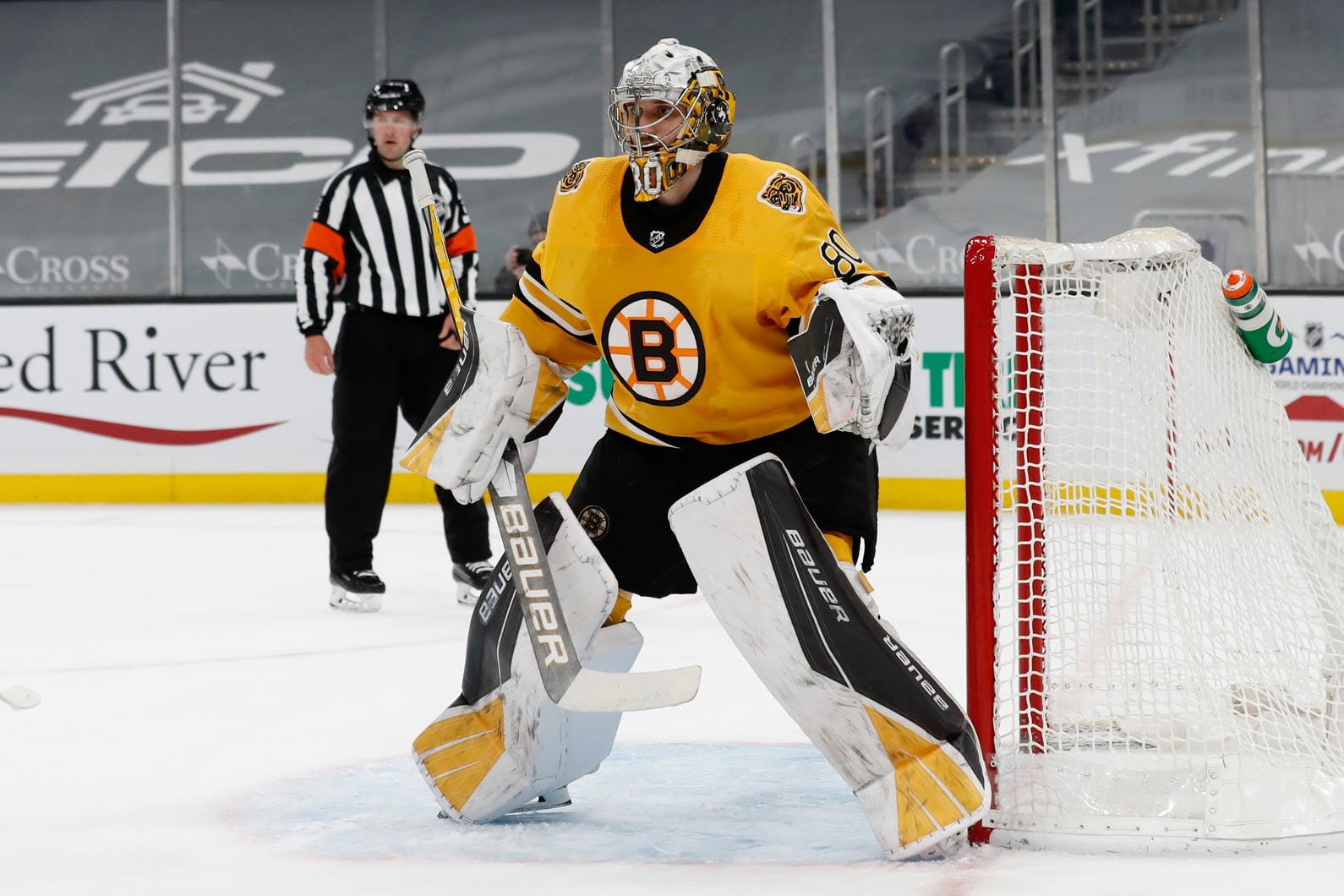 By Ryan Pike
1 year ago
Jacob Markström will be the starting netminder for the Calgary Flames when the puck drops on Saturday night, Oct. 12, in Edmonton for the opening game of their 2021-22 season. Sitting on the bench, wearing a ball cap and holding a clipboard, will be one of two newly-acquired Europeans.
Let’s take a look at the battle to be Markström’s understudy to start the season.
Since Miikka Kiprusoff hung up his pads and became a full-time amateur ice fisherman in Finland, the Flames have had 15 different goaltenders start games. (A 16th, Artyom Zagidulin, was used in relief.) They settled on a top guy when they signed Markström to a six year deal with a $6 million cap hit.
But finding a capable caddie – a search that dates back to Kiprusoff’s time with the club – has still been a challenge. During the post-Kiprusoff era, the Flames have tried the likes of Reto Berra, Chad Johnson, Cam Talbot, Eddie Lack, Mike Smith and David Rittich in that role. Sometimes the number-one faltered, sometimes the backup faltered, but they have yet to find the perfect recipe with their goaltending tandem.
The Flames have two netminders in camp that they’re hoping could be the perfect compliment to Markström for the upcoming campaign: 24-year-old Swede Adam Werner and 24-year-old Czech Daniel Vladar.
Vladar is a product of the Czech Republic. He was a 2015 draft choice by the Boston Bruins and began playing pro hockey in North America in 2016-17. He came up through the Kladno system in the Czech Republic – the same team that Jaromir Jagr owns – but his final amateur games were with the USHL’s Chicago Steel. He’s played six NHL games – one playoff and five regular season. In five starts last season he went 2-2-1 with an .886 save percentage, but that’s marred by an eight-goal walloping he faced against Washington in the second half of a back-to-back – Jeremy Swayman played the night before and lost, so they couldn’t relieve Vladar when the game got out of hand.
Boston traded Vladar to Calgary for a third round pick, opting to keep Swayman to play alongside Linus Ullmark. Vladar becomes waiver eligible this season, while Swayman remains waiver exempt. Swayman had a .945 save percentage over 10 appearances last season for the Bs, so it was probably an easy decision for their management braintrust.
Werner is a product of Sweden. He was a 2016 draft choice by Colorado (in his second year of draft eligibility), but didn’t come over to North America full-time until 2019-20. He’s played two NHL games (both in 2019-20): a 40-save combined shutout after Pavel Francouz was injured 31 seconds into a 4-0 win over Winnipeg, and a 5-2 loss against Edmonton two nights later when he got lit up by Connor McDavid & Co. and pulled after 28 minutes.
Werner wasn’t tendered a qualifying offer by Colorado, as the Avalanche were still pursuing Philipp Grubauer and juggling minor leaguers Justus Annunen, Jonas Johansson and Hunter Miska. There simply wasn’t room at the proverbial inn to keep Werner.
As you can see, neither goalie has a ton of NHL experience. They combine for six NHL starts and eight appearances, something Markström usually accomplishes in an average fortnight. But both are highly regarded by the Flames’ scouts and goaltending department, and acquiring both arguably spreads the risk around – the hope is that one of them can establish themselves as a legit NHL goalie, albeit as a backup.
If you want to throw out their tiny NHL samples, here’s how the duo compares otherwise:
If you’re judging it merely on numbers and previous experience, Vladar seems to have the edge. He was a better AHL goalie, he’s played more at the NHL level, and he’s amassed a better resume (both domestically and internationally). He’s also the easier goalie of the two to keep in the NHL, all things being equal, given his waiver status.
Werner and Vladar are starting off camp in a group alongside Markström. Only time will tell who remains with him on the NHL roster when camp ends on Oct. 11.
Uncategorized
Recent articles from Ryan Pike