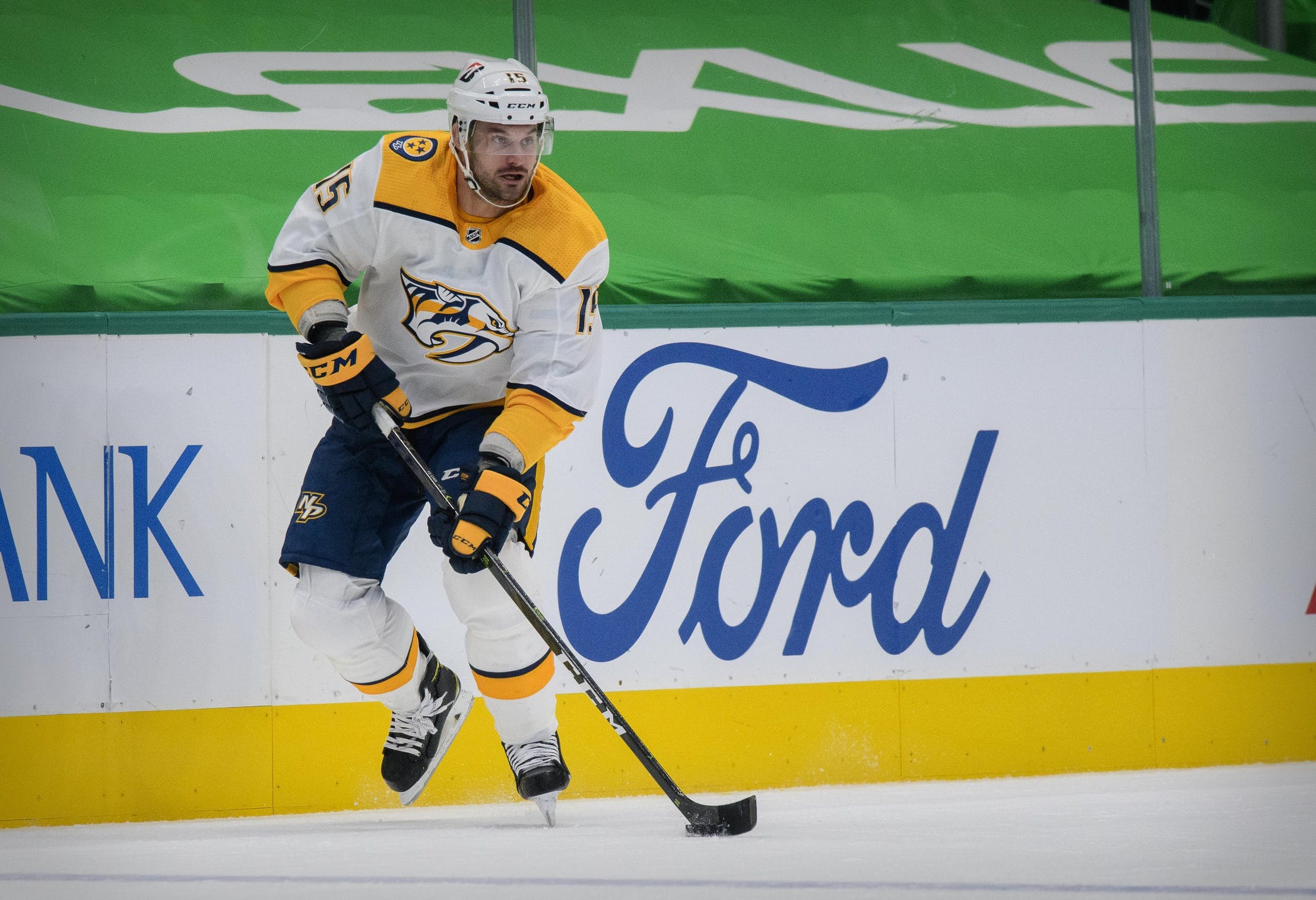 By Ryan Pike
1 year ago
For years, Calgary Flames general manager Brad Treliving has spoken of the “push from below” – a potential ground-swell of prospects pushing to take jobs from NHL veterans. This year, the best opportunity for a player pushing from below could come up the middle. With Derek Ryan departed to Edmonton via free agency, there’s no incumbent fourth line centre.
Here’s a look at the four top contenders for that gig.
The four contenders are two veterans – Brad Richardson and Byron Froese – and two relative youngsters – Adam Ruzicka and Glenn Gawdin.
Richardson, 36, is a veteran left shot centre who’s played for Colorado, Los Angeles, Vancouver, Arizona and Nashville and is a known quantity in NHL circles. He signed as a free agent and is coming off a significant injury last season. When he’s healthy, he’s a reliable two-way forward (albeit with a fairly muted offensive impact). He won a Stanley Cup with Los Angeles in 2012 (with Darryl Sutter as his coach).
Froese, 30, is a veteran right shot centre who’s played primarily at the AHL level. He’s been one of Stockton’s leaders since joining the organization in 2019, and he’s had brief NHL stints with Toronto, Tampa Bay, Montreal and the Flames. Like Richardson, he’s a two-way forward who won’t move the needle a ton at the NHL level, but can be a reliable tough minutes performer.
Ruzicka, 22, is a promising young left shot centre from Slovakia. A fourth round selection in 2017, Ruzicka is entering the third year of his entry-level deal and he’s progressed nicely in each of his first two pro seasons. He made his NHL debut last season and looked promising, if a bit uneven, in his three big club appearances. He’s young and big and could add an element of size and skill to the fourth line, if he can maintain the consistency he developed last season in Stockton.
Gawdin, 24, is a very effective two-way AHL centre who shoots right. A free agent signing of the Flames – originally a St. Louis Blues draft choice that wasn’t signed – he was a promising WHL forward who became a promising AHL forward. Gawdin’s not as big or dynamic as Ruzicka, but he’s been a really effective AHL centre and history suggests that AHL success is a nice predictor of NHL success. He played seven games for Calgary last season and was fairly effective. He’s going to become a Group 6 free agent at the end of the upcoming season (unless he plays 73 games), so figuring out if he’s an NHL player before the Flames potentially lose his rights may be prudent.
The Flames’ incumbent centres are Elias Lindholm (a rightie), Sean Monahan (a leftie) and Mikael Backlund (another leftie). Of the four contenders, Richardson seems like the top choice based on his NHL experience and familiarity with Sutter and his systems. Having an additional right shot centre on the roster may also be advantageous for lineup flexibility and the ability to take strong-side face-offs from time-to-time, which may boost the chances of Froese and Gawdin. Considering Richardson’s recent injury and the utter grind that this coming season looks to be based on the compressed Olympic schedule, it seems likely that we’ll see at least two of these four men on the NHL club during the 2021-22 season.
Who do you see opening the 2021-22 regular season as the Flames’ fourth line centre? Sound off in the comments!
Uncategorized
Recent articles from Ryan Pike