Which veteran will be Calgary’s seventh defender?: 2021 Flames camp battles 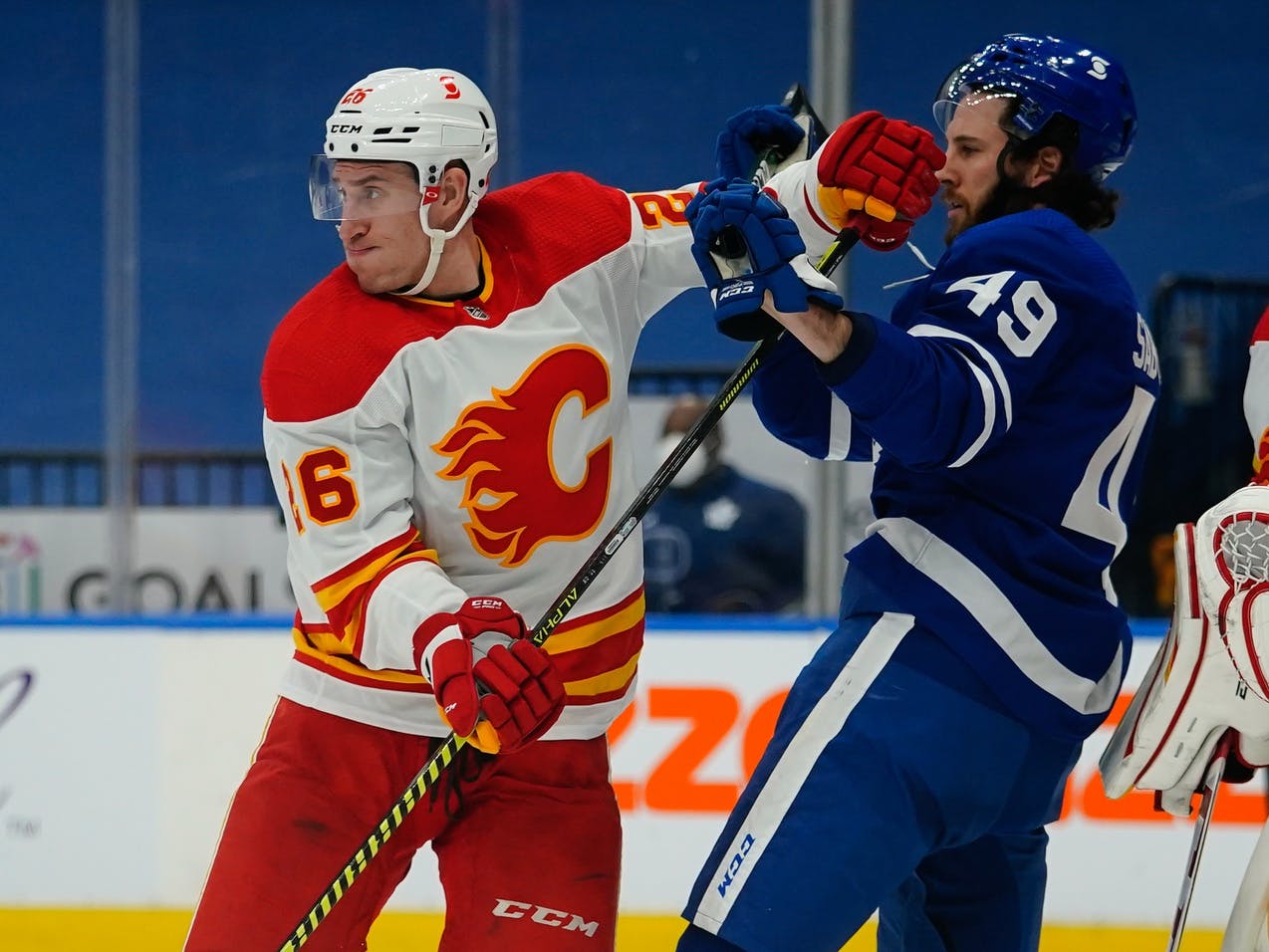 By Ryan Pike
1 year ago
When the Calgary Flames begin the regular season on Oct. 16, they’ll do so with a defensive group with a couple new faces (in the form of Nikita Zadorov and Erik Gudbranson). But with six defenders in camp on one-way NHL deals, we more or less know who the regular defenders will be on opening night.
But there are a handful of players that could be the seventh man on the blueline.
Finding a seventh defenseman can be a challenge. You need a player who has played in the NHL before and can jump in at a moment’s notice, but whose development won’t be stunted or stalled by sitting in the press box for long stretches of the season.
The Flames have four primary contenders for the seventh defender gig: Michael Stone, Oliver Kylington, Andy Welinski and Kevin Gravel. (Connor Mackey probably isn’t an option, as he needs to play regularly in order to push for an NHL full-time job in the near future.)
Stone, 31, is a right shot blueliner and probably the main contender due to his strong play last season on the third pairing alongside Juuso Valimaki. Stone’s been a polarizing figure over the past few seasons, likely due to his acquisition cost – he cost the club a couple draft picks – and that he’s one of the few players league-wide to be bought out and then re-signed by the same team. After dealing with some injuries, including a blood clot issue, Stone emerged as one of the team’s most reliable depth defenders under Darryl Sutter’s watch.
Kylington, 24, is a left shot blueliner that can play either side of the ice. He’s a tremendous skater and puck-mover, but his defensive game has drawn criticism here and there, and it’s probably why successive Flames coaches haven’t used him regularly. He’s an excellent AHL player, but hasn’t played regularly enough in the NHL to really know what his potential is – he’s, at least, a replacement level defender. His versatility is a plus, but the questions about his defensive acumen still dog him.
Welinski, 28, is a right shot blueliner. He was signed in the off-season as a free agent, having previously played for the Anaheim Ducks (and their AHL team in San Diego). He’s an offensive-minded AHL defender who can’t quite be the same thing at the NHL level, but has shown thus far to be a capable two-way depth option for Anaheim’s third pairing – and presumably Calgary’s, too.
Gravel, 29, is a left shot blueliner. He was another off-season signing, having previously played briefly in Toronto, Edmonton and Los Angeles. He’s a two-way defender whose NHL talents have skewed towards the stay-at-home, physical style – if you called him a Robyn Regehr cosplay you wouldn’t be far off – but he’s managed to chip in goals here and there on various teams’ third pairings.
For the style that Sutter likely wants the Flames to play – structured, physical and consistent – the two players that probably fit that best would be Stone and Gravel. Welinski’s handedness and experience probably give him a slight edge over Kylington among the more puck-moving options.
Who should be the Flames’ seventh defender when the season opens? Sound off in the comments!
Uncategorized
Recent articles from Ryan Pike