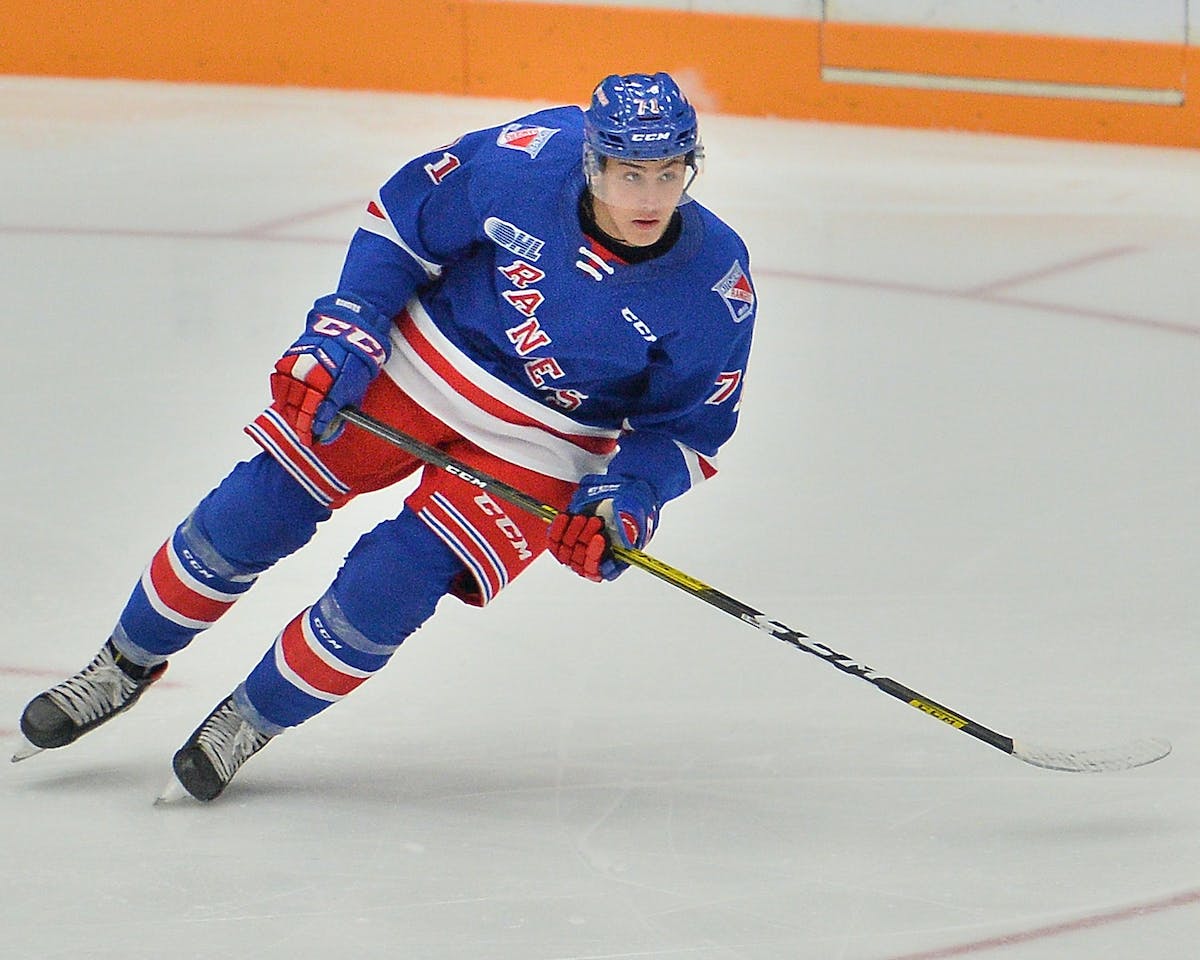 By Mike Gould
1 year ago
The first round of the 2021 NHL Draft will take place on July 23. Following the results of the draft lottery, the Flames hold the 12th overall selection and will have a chance to add a high-end prospect to their organization.
Francesco Pinelli is an exciting centre who dominated with Team Canada at the 2021 U-20 World Championships. He combines his NHL-ready size with a flashy and productive offensive game, creating one of the best overall packages available in a centre for this year’s draft.

Pinelli stands 6’1″ and weighs 185 pounds. He’s a left-handed centre who skates extremely well for a player of his size. While he couldn’t prove himself in the OHL during his draft year, he produced extremely well as a 16-year-old in 2019–20 and looks to be one of the more promising offensive talents of his draft class.
Future Considerations’ draft guide (order it here) describes Pinelli as “an incredibly dynamic offensively gifted forward” who can be “highly deceptive with his use of his edges.”

Pinelli’s edgework and overall skating abilities are fantastic. He’s dynamic and deceptive, and he showed an ability to be able to effectively utilize the 10-and-2 skating style to deceive opponents in different areas of the ice. He makes really tight turns and can change direction on a dime. He utilizes weight shifts to move quickly around defenders, bursting with some speed as he adjusts his pace on the fly. The fearlessness he shows is impressive. He constantly tries to push through traffic. Sometimes it pays off, other times he puck-handles himself into a turnover.

McKeen’s Magazine’s profile of Pinelli (paywall) calls him “an intelligent and crafty player” and “one of the most well-rounded players available for the NHL Draft this year.”

The talking point with Pinelli’s game is his skating ability. A strong linear skater, Pinelli has a good top gear that does allow him to play with pace and back down defenders while in possession of the puck. He is also strong on his skates, allowing him to win battles along the wall and drive the net with authority. However, Pinelli’s startups lack power and this can prevent him from creating the kind of separation he desires when attempting to enter the zone. Pinelli also lacks a dynamic quality to his stride, showing an inability to alter direction when in full stride or utilize linear crossovers to build speed alternatively. His base mechanics are strong, however working with skating coaches will be required to help him become a better overall mover. This will be critical for his future success at the NHL level.

Pinelli likely projects as a secondary scorer down the middle at the NHL level.

Here’s the complete list of 2021 first-year draft-eligible OHL players who outscored Pinelli in the 2019–20 season:
McTavish is widely considered a top-10 talent in this year’s draft (he ranks at No. 8 on Elite Prospects’ consensus ranking). Conversely, Pinelli is generally seen as a likely mid-to-late first-rounder. What separates these two players?
For one: McTavish is taller, heavier, and more of a natural goal-scorer. While Pinelli scored 18 goals in 59 games in 2019–20, McTavish tallied 29 in 57.
Second: McTavish scored seven more primary points than Pinelli at even-strength. He also took 55 more shots than Pinelli’s 122 in two fewer games and averaged slightly over a minute more per game than Pinelli did.
Still, at the end of the day, Pinelli scored 41 points in 59 games as a 16-year-old OHL forward; McTavish scored 42 points in 57 contests.
According to Pick224, Pinelli managed to outshine McTavish in one particular category during the 2019–20 season: goals-for percentage. McTavish’s Peterborough Petes outscored their opposition by a 46-44 margin during his shifts at even-strength; without him, the Petes scored 116 goals and conceded just 84.
Pinelli’s Kitchener Rangers bested their foes by a count of 58-41 with him on the ice (good for a 58.59 goals-for percentage). Without him, they outscored their opponents 126-92 (a 57.80 goals-for percentage). That’s an improvement, albeit a slight one.
With the 2020–21 OHL season cancelled due to the COVID-19 pandemic, Pinelli took his talents overseas to the Alps Hockey League and played 13 games for the Slovak team HDD Jesenice. He scored 11 points (five goals, six assists) in 13 games for Jesenice before joining Team Canada at the 2021 IIHF U-18 World Championships, tying with McTavish for third in tournament scoring with 11 points (four goals, seven assists) in seven games.

Connor Zary and Adam Ruzicka both look promising but are far from being sure things for the Flames. After those two, the Flames’ pool of centre prospects is roughly as deep as the Elbow River in late August.
Depending on which players hear their names called before the Flames step up to the podium at No. 12, Pinelli could rank among the best centres available to be selected.
Here’s a look at where some of the major draft evaluators rank Pinelli within the 2021 class:
McKeen’s Hockey — 25th
Future Considerations — 31st
The Athletic (Corey Pronman) — 36th
The Athletic (Scott Wheeler) — 24th
Dobber Prospects — 26th
TSN (Bob McKenzie) — 24th
TSN (Craig Button) — 24th
Sportsnet (Sam Cosentino) — 29th
Neutral Zone — 24th
Draft Prospects Hockey — 31st
NHL Central Scouting (North American Skaters) — 15th
Recruit Scouting — 12th
EliteProspects.com — 16th
Smaht Scouting — 22nd
The Puck Authority — 36th