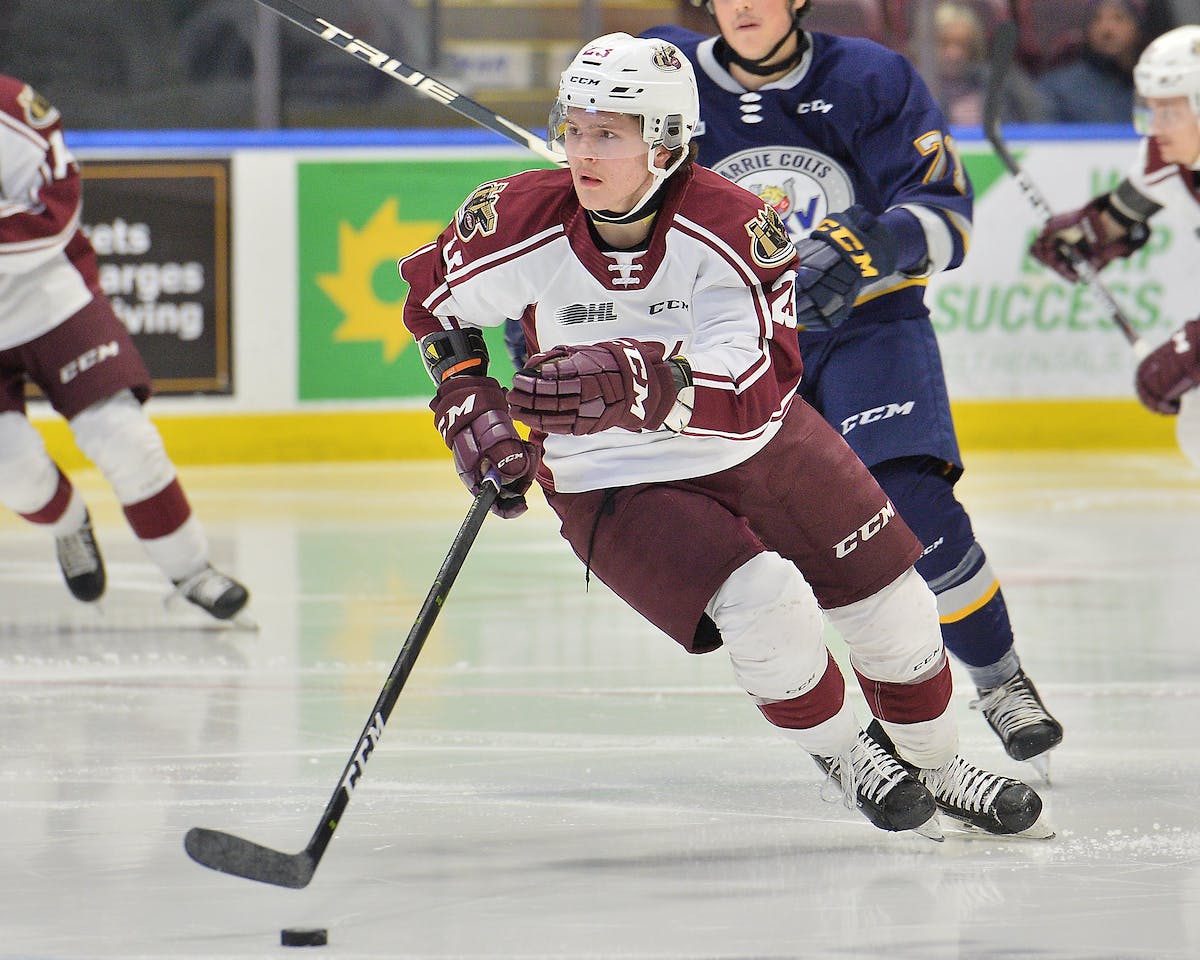 By Mike Gould
1 year ago
The first round of the 2021 NHL Draft will take place on July 23. Following the results of the draft lottery, the Flames hold the 12th overall selection and will have a chance to add a high-end prospect to their organization.
Few draft-eligible prospects have seen their stock rise at a greater rate over the last three months than Mason McTavish. The son of a former Calgary Flame (and unrelated to former Edmonton Oilers executive Craig MacTavish), McTavish is a big goal-scoring centre who boasts an impressive array of skills.

McTavish is both an impressive shooter and scorer. As a 16-year-old OHL rookie with the Peterborough Petes in the 2019–20 season, he shot the puck at an unmatched level for his age group and came within a goal of 30.
With the 2020–21 OHL season having been cancelled due to the COVID-19 pandemic, McTavish took his talents to his birth country. His father, Dale, played nine NHL games with the Flames in 1996–97 before spending a decade in Switzerland; Mason was born in Zürich in 2003 but competes internationally for Canada.
Playing for EHC Olten of the Swiss League, McTavish led the team (and finished fourth in the league) in goals-per-game. Chapin Landvogt scouted McTavish’s games in Switzerland for McKeen’s Magazine and described his shooting ability in his draft profile (paywall):

The subtle force with which McTavish has scored some of his wrist shot goals this season is phenomenal. He has a wrist shot that is plenty deadly and accurate – and he loves to use it. There is little hesitation to shoot when the opportunity arises. His wrister is accompanied by a very respectful one-timer and both shots are most commonly put on display on the power play, either right in the upper slot or along the right-wing faceoff circle. He can pinpoint his shot and get it high from close quarters.

McTavish is a skilled forward with deft hands and the wherewithal to battle for pucks along the boards. His one notable area for improvement is his mobility, with Tony Ferrari expressing concern about McTavish’s skating in a report for DobberProspects:

He will need to improve his skating a bit as he can be a bit lumbering on his feet at times. When he digs in, he can generate some solid power and get up to pretty good speeds but the willingness to move his feet isn’t consistent. This also hampers him in his own end. His strength and ability to lean on a player is valuable and he should continue to do more of that as he develops but defensive effort is fairly broad concern among most prospects at this age.

Hockey Canada selected McTavish as an alternate captain for the 2021 IIHF World U-18 Championships in Texas; when captain Shane Wright missed two games with an injury, McTavish took on the mantle with the “C.” He helped lead the Canadians to gold, earning rave reviews while finishing in a tie for fifth in tournament scoring.

McTavish scored 29 goals in just 57 games as a first-year OHL player with the Petes in the 2019–20 season. His goal-scoring output ranked second in the entire league—behind projected 2022 first-overall pick Shane Wright, who scored 39 goals in 58 games—among players at least one year out from becoming draft-eligible.
Wright’s 39 goals came on just 198 shots, giving him a sky-high 19.70 shooting percentage. Only 122 of Wright’s shots came at even strength. Conversely, McTavish was a high-volume shooter in the OHL who led all U-17 players with 147 shots at even strength. He amassed a total of 177 shots and converted on 16.38% of them.
24 of McTavish’s 29 goals in the 2019–20 season came at even strength. Once again, only Wright (28) ranked ahead of him in that category among non-draft-eligible players.
With McTavish on the ice at even strength in 2019–20, the Petes outscored their opposition by a 46-44 margin. Without him, Peterborough scored 116 goals and conceded just 84 (stats via Pick224).
McTavish scored nine goals and added three assists in 13 regular-season games with EHC Otten in the 2020–21 season. He added seven points (two goals, five assists) in four playoff games.
At the 2021 U-18s, McTavish scored 11 points (five goals, six assists) in seven games. Only Wright, projected 2023 top picks Matvei Michkov and Connor Bedard, and fellow highly-touted 2021 draft-eligible prospect Nikita Chibrikov outscored McTavish at the tournament.

The Flames need more size and skill down the middle. They could also use a great deal more scoring, having just finished the 2020–21 season with the 10th-fewest goals in the NHL (and the second-fewest in the North Division).
Sean Monahan, the Flames’ longtime top goal-scorer down the middle, has battled through multiple injuries recently and is coming off a year where he scored just 10 goals in 50 games. It’s time for the Flames to start exploring a variety of different contingency plans in the event Monahan is no longer a viable option for the team, either due to a trade or his continued decline.
McTavish is ranked at the following positions by these publications and scouting services:
McKeen’s Hockey — 16th
Future Considerations — 15th
Sportsnet (Sam Cosentino) — 9th
Dobber Prospects — 29th
TSN (Bob McKenzie) — 11th
Draft Prospects Hockey — 14th
NHL Central Scouting (North American Skaters) — 2nd
Recruit Scouting — 17th
EliteProspects.com — 5th
Smaht Scouting — 32nd