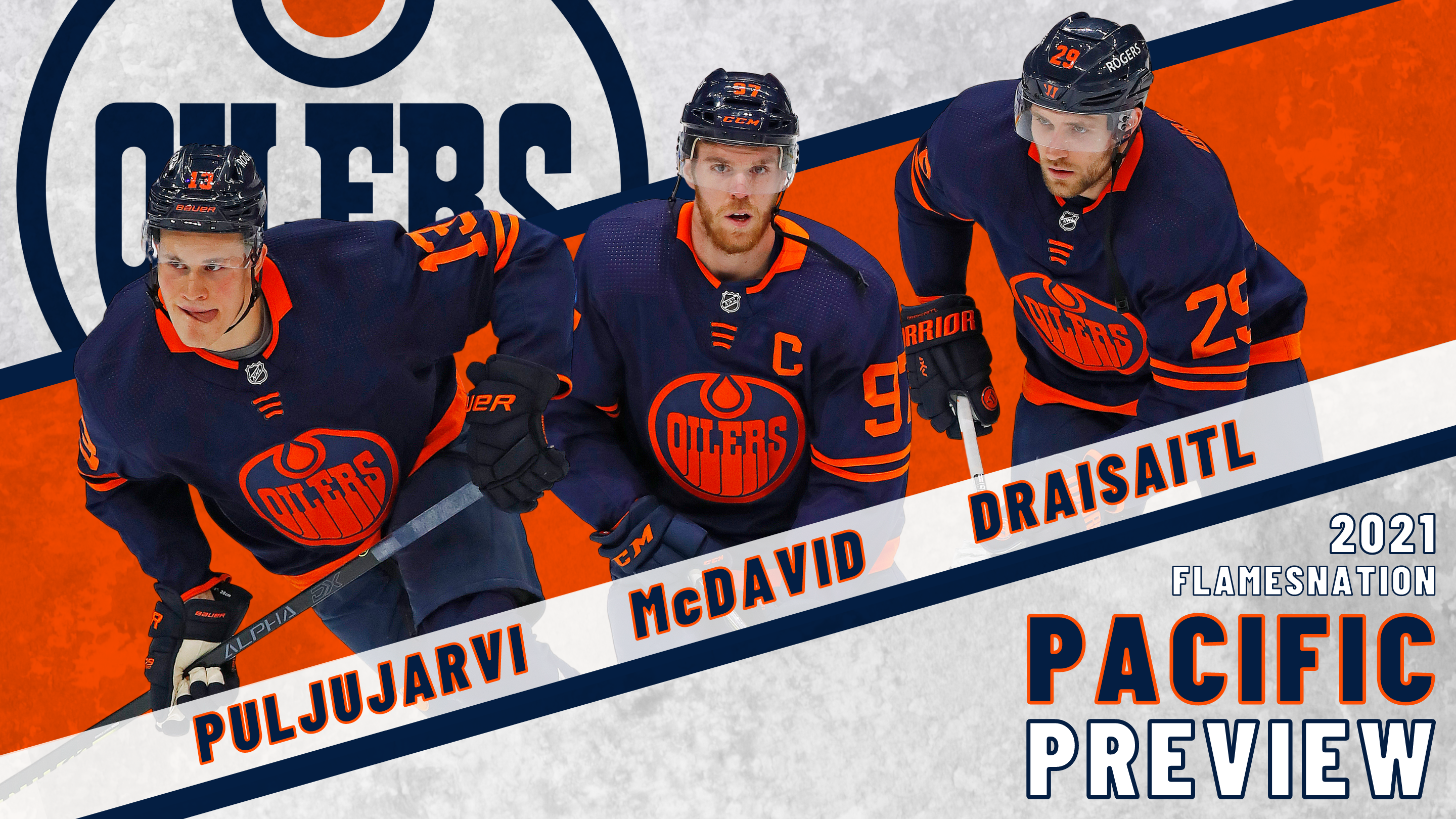 By Ryan Pike
1 year ago
If there’s one team the Calgary Flames will forever be compared to, it’s the Edmonton Oilers. Since the Flames arrived in Alberta in 1980, they’ve been in a battle with the Oilers for provincial supremacy.
2021-22 looks to be a season where the Oilers have an edge in the battle, primarily due to the fact that Connor McDavid and Leon Draisaitl are excellent hockey players who score all kinds of goals.

The Oilers went 35-19-2 last season with 72 points, second in the North Division (and just five points behind Toronto for first place). They made the playoffs by 17 points… and then were swept in the opening round by the Winnipeg Jets. The Oilers were a pretty consistent team all season: their longest losing skid was five games, but aside from that stretch they usually won in bunches and lost in pairs.
Edmonton had a lot of strong individual performances. Five players hit double-digits in goals: McDavid (33), Draisaitl (31), Darnell Nurse (16), Ryan Nugent-Hopkins (16) and Jesse Puljujarvi (15), while Tyson Barrie missed that mark but had a strong year. McDavid and Draisaitl were one and two in points in the entire league. McDavid was second in goals and Draisaitl fourth. Barrie led all blueliners in points, with Nurse finishing second among defensemen in goals.
The Oilers wer a top-heavy offensive team that just couldn’t find traction in the playoffs. They were middle of the pack in expected goals percentage, but that’s a product of them being strong offensively and not strong defensively; they had to win a lot of 5-4 games.

The Oilers needed to bolster their (below) average defense and goaltending, but decided to revamp their forwards. To their credit, their forward group looks a lot deeper. They swapped out Dominik Kahun, Jujhar Khaira and James Neal for Derek Ryan, Zach Hyman, Brandon Perlini and Warren Foegele. Their forward group looks excellent.
But the moves they made were seemingly at the expense of their blueline. Gone are Caleb Jones, Adam Larsson and Ethan Bear, and in are Cody Ceci and Duncan Keith. In other words: they’re going to continue to have to win a lot of 5-4 hockey games.

Here’s the thing: McDavid and Draisaitl are awesome. Nugent-Hopkins is pretty good. Their forward depth is improved, with Derek Ryan anchoring a nice third line group, and they have enough depth forwards that they can probably sustain a few injuries and keep chugging along. As long as one or both of McDavid and Draisaitl are in their line-up, they’ll be just fine offensively. Their power play is going to be amazing.
But their defensive group was a bit shaky last season and the changes they made haven’t really fixed that hole. Heck, if anything they’re going to remain a bit top-heavy and reliant on Nurse and Barrie. But their goaltending tandem remains 33-year-old Mikko Koskinen and 39-year-old Mike Smith: they were fine last season, but eventually Father Time will come a-callin’ and they won’t be nearly as effective.
The Oilers will need to win a lot of 5-4 games. They’re still pretty well equipped to do so.

The Flames and Oilers met 10 times in 2020-21, as they were both in the Canadian Division. Edmonton captured 12 of a possible 20 points in those meetings.
Here’s when they’ll meet this season:

Based on the odds from our pals at PointsBet, here’s how the Oilers stack up within the NHL:
The Oilers are a very likely playoff team.
Uncategorized
Recent articles from Ryan Pike