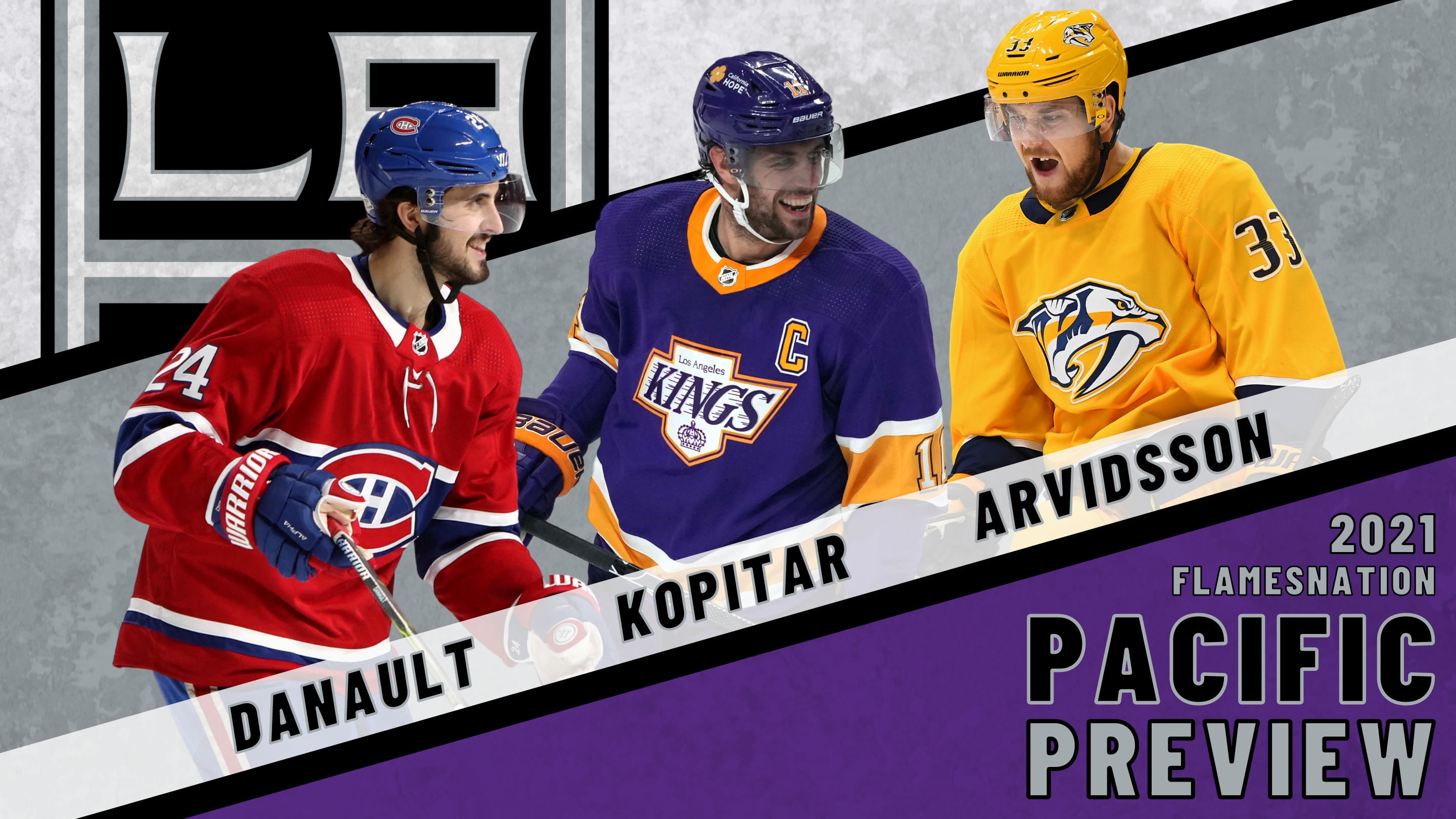 By Mike W
1 year ago
The Calgary Flames are back in the Pacific Division this season. To get everyone reacquainted with the new divisional foes, we’re previewing every team.
After being swept by the upstart Vegas Golden Knights in round one of the 2018 playoffs the once-mighty Kings fully embraced the rebuild path. Over the last three years, Rob Blake’s Kings have built one of the deepest and dynamic prospect pools league-wide. With some veteran additions this offseason and stalwart stars of old still hanging around, it appears as though the Kings may be lurching towards a step forwards in the standings.
The rebuild has been rolled out strategically and has yielded a plethora of promising prospects and optimism is seemingly high. However, the Kings are still thin on depth, top-end talent, and they are heavily counting on ageing old stars and unproven youngsters. As such, they may still be in tough to gain any ground in the immediate, much to Drew Doughty’s chagrin.

Being smack dab in the middle of rebuild expectations for the Kings were realistically modest. While the veteran likes of Doughty, Anze Kopitar, Jonathan Quick, and Dustin Brown were not moved out, the Kings stuck to the rebuild plan over the course of the shortened season. Their 21-28-7 record ranked them sixth in the West Division and 25th league-wide.
Stuck in a division with heavy hitters such as the Vegas Golden Knights and Colorado Avalanche, the Kings amalgamation of fading veterans and inexperienced youngsters resulted in a lot of inconsistency. They were feasted on by the Avalanche and Knights, going 1-7-0 and 2-6-0 against the Western juggernauts respectively.
(Data from Evolving Hockey. Adjusted for score and venue).
The Kings actually got off to a surprisingly decent start in 2021. Bolstered by a six-game winning streak in February, they hung around the playoff picture longer than many would have expected. Ultimately, poor overall play at five on five and overreliance on Kopitar caught up with them. By season’s end, only Vancouver and Chicago had a worse expected goal differential rate per sixty minutes. 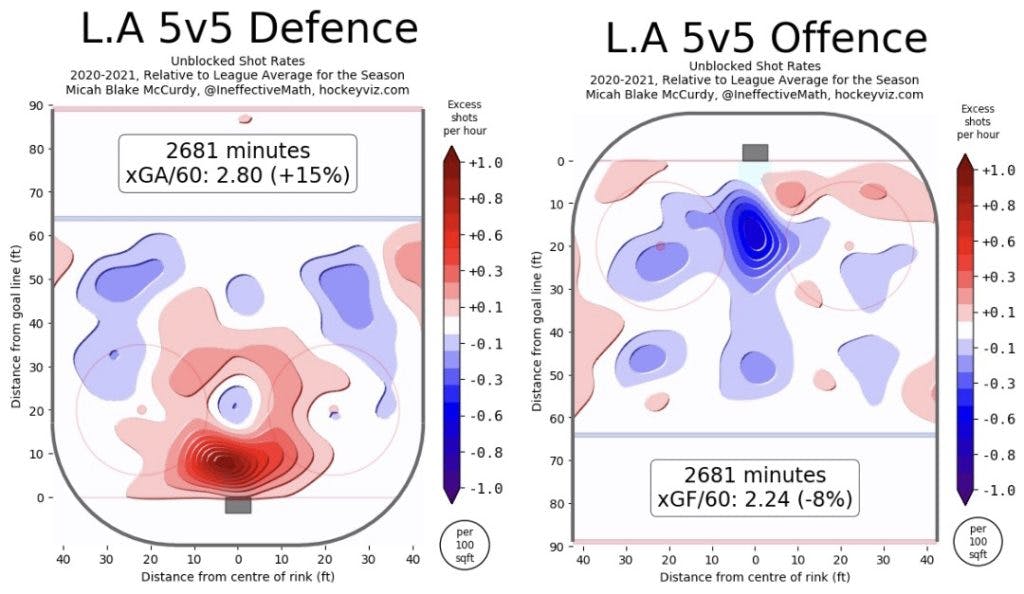 (5v5 Shot Maps from HockeyViz.com)
Their biggest issue was scoring goals at even strength. Lack of firepower and offensive consistency lead the Kings to a measly 95 five on five goals. Only Buffalo (87) and Detroit (87) were more futile in terms of putting the puck in the back of the net at full strength.

Rob Blake signalled his desire to expedite the rebuild as the Kings went out and spent some money this offseason (or maybe he is in the business of keeping Drew Doughty happy). Blake bolstered the top-six signing Phillip Danault and trading for Viktor Arvidsson. They spent some serious money but both players will help remedy what ailed the Kings last year. Danault will surely aid Kopitar’s two-way duties and insulate Quinton Byfield in his rookie year while Arvidsson is a legitimate sniper who can push for 30 goals.
The Kings also brought in veteran Alex Edler on a one-year deal to round out a blueline that includes the likes of young skaters Mikey Anderson and Tobias Bjornfot. Edler brings a solid and reliable defensive game that should stabilize Todd McLellan’s backend.
Based on Dom Luszczyszyn’s model, the Kings’ off-season additions have them as one of the most improved teams in terms of value-added.
The insertion of some of the high-end young talent will also likely change the roster this upcoming year. Quinton Byfield’s rookie campaign is highly anticipated. Unfortunately, the 19-year-old sustained an ankle fracture in preseason action and is out indefinitely. When he returns the hulking young stud from Newmarket will make his presence known.
Others looking to secure full-time spots and play impactful hockey are Arthur Kaliyev, Alex Turcotte, and Rasmus Kupari.

It’s really easy to get excited about the Kings this year based on their cupboard of strong young players and solid off-season pickups. The allure of the expedited rebuild year where a team is suddenly stronger than all the pundits expect is usually a fanciful one. The Kings should certainly be much better this year but will still have a tough time gaining ground. There will certainly be plenty of focus on internal growth.
The issue is finding the bridge between the players of old and players of new. The future stars, although ripe with talent, haven’t proven to be ready yet while the old stars are dwindling and still being relied upon heavily.
Kopitar has proven he’s still a great player, and again, the additions of Danault and Arvidsson add some top-end talent and depth. The hope is one similarly facing their rival down the I-5 in Anaheim: the young players will emerge and quickly establish themselves and play above the veterans.
Potential is abundant but in the immediate, this team is still paying a worn-down Doughty a ton of money and will still rely heavily on a 34-year-old Kopitar. The new additions will give them a boost and Cal Petersen should provide at least adequate netminding but until the younger skaters take major steps, the Kings will have a hard time being competitive over 82 games.
But, hey, they do play in the Pacific. If the youngsters do arrive this year the Kings could be situated to push in a weak division.

These two clubs didn’t meet last season due to the division-only schedules. The Kings went 3-1-0 against Calgary in four outings back in 2019-20.
Here’s when they’ll meet this season:

Based on the odds from the folks at PointsBet, here’s how the Kings stack up within the NHL:
The Kings are poised to take a step but expectations might have to be tempered. One thing that does not need tempering is excitement for the new, stunningly beautiful throwback alternate jerseys the Kings will be sporting this year. Chrome buckets for the win.

After signing up for a free account, we’re going to give you a bunch of boxes with player names and you’re going to pick a name from each box until you’ve put together a super crew that you think can contend for a NationDrafts championship. Seems easy, right? It is easy and that’s not just because you’re wicked smaht. Sign up for FREE right here.
Uncategorized
Recent articles from Mike W