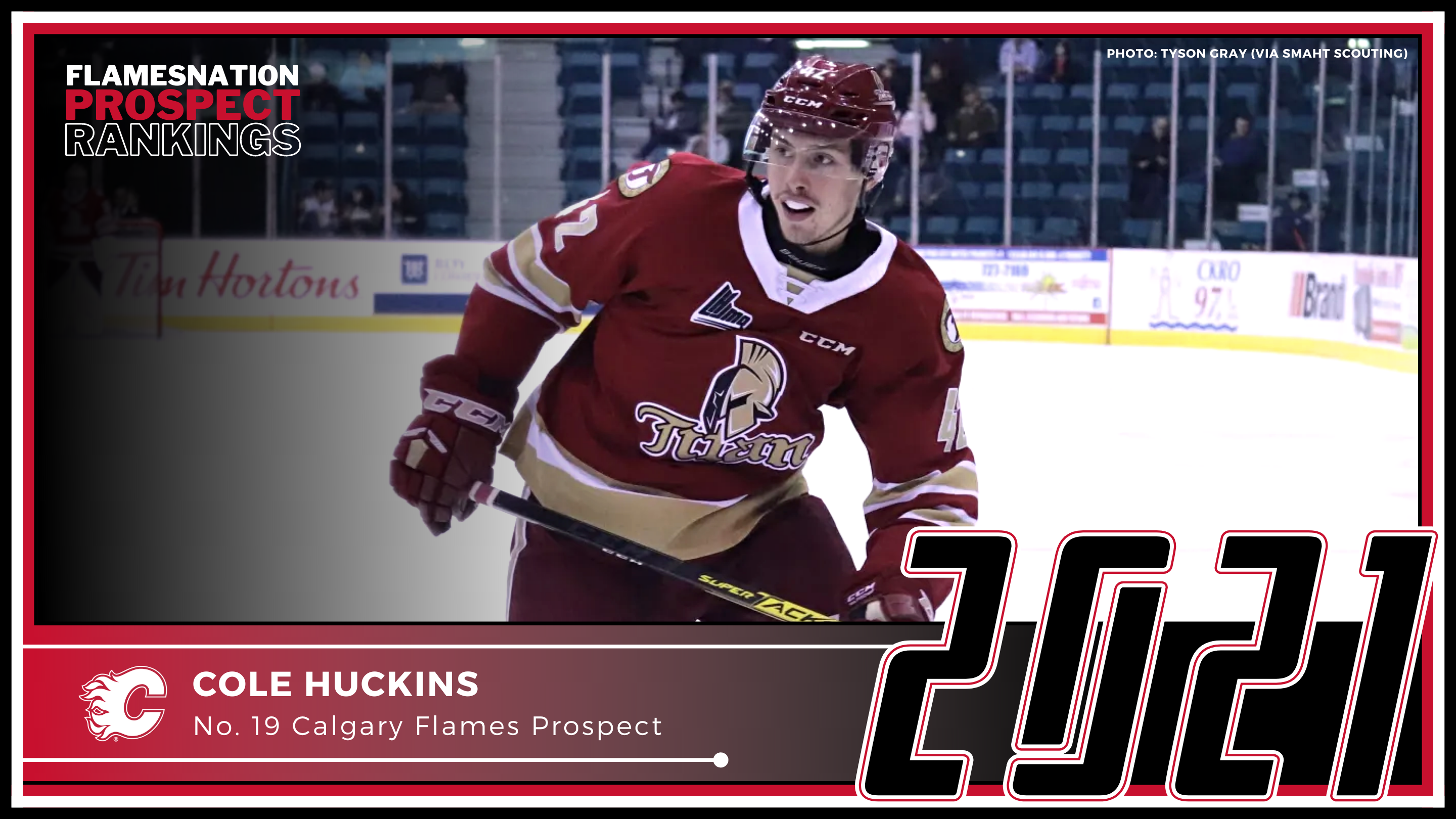 By Shane Stevenson
1 year ago
Big centers with size combined with great offensive instincts and patience with the puck. Hard to find in the modern NHL.
One of the most recent draft picks of the Flames who fits this mould falls in at number 19 on our list – Cole Huckins.
Huckins, 18, plays for the Acadie-Bathurst Titans of the QMJHL. He plays second line centre behind Montreal Canadiens second-rounder Riley Kidney. Huckins will be returning to the QMJHL to expand on his development in a full year playing a big role for his team.
Cole Huckins
Left-handed centre
Born May 14, 2003 (age 18) in Fredericton, NB
6’3”, 201 pounds
Drafted in third round (77th overall) by CGY in 2021
Huckins really got noticed and recognized for his play in the Midwest Prep Hockey League (MPHL) centring a line for Stanstead College. In 2018-19 he actually tied with Gregory Lapointe for the league lead in points with 27 in 18 games.
This caused the Titans to draft Huckins 16th overall in the 2019 QMJHL Draft, as well as Waterloo to select him 28th overall in the USHL Draft. He opted to go play in the CHL – and plays nationally for Canada despite having dual Canadian and American citizenship.
Huckins definitely has more room to develop in the CHL, last year he only averaged 16 minutes of ice time per game. Positive news – the majority of his production was at even strength. 20 primary even strength points in 32 games at 18 years old? I’d invest my time in his development too. The raw tools and hockey IQ is clearly there. 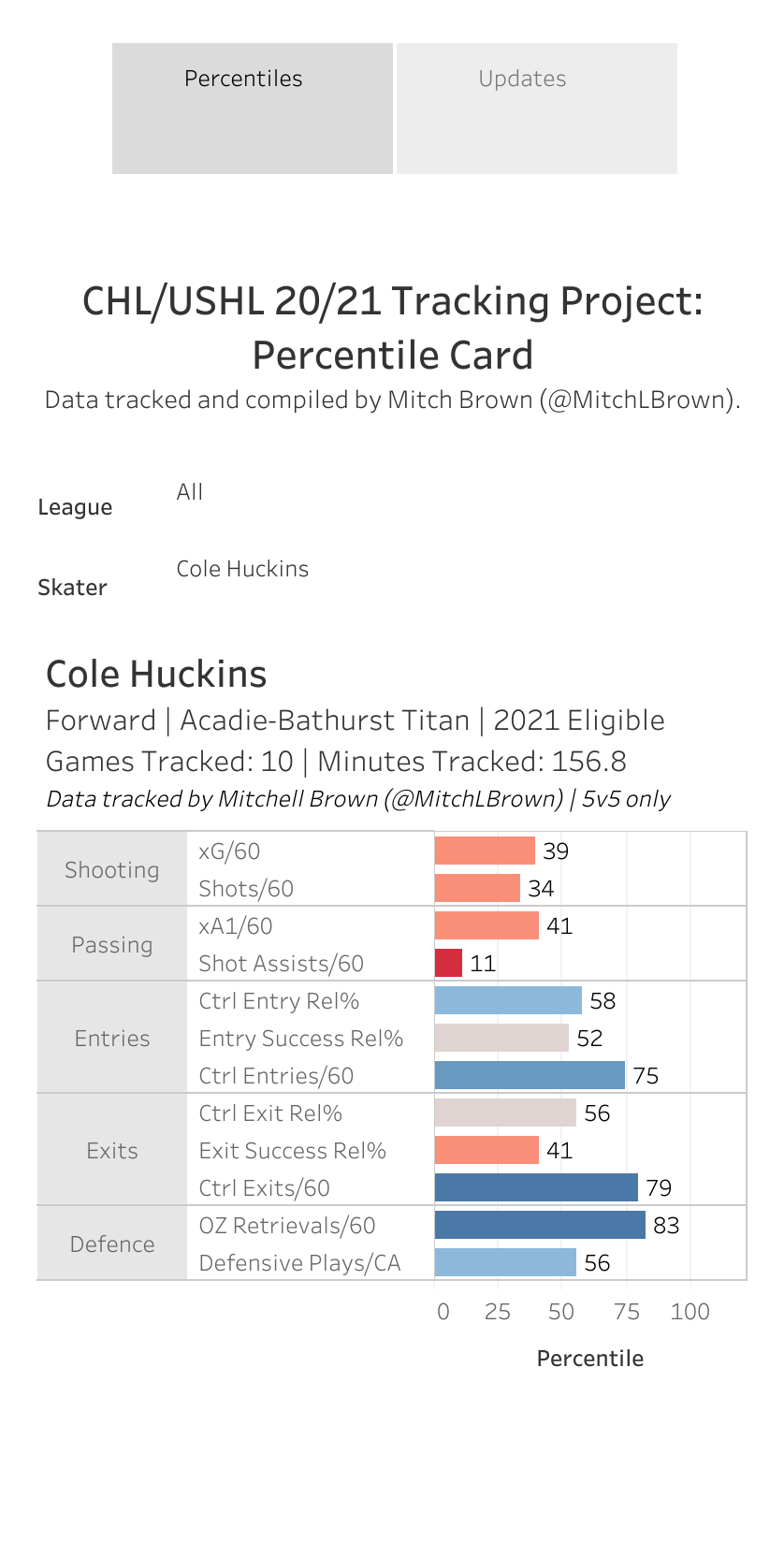 As you can see from the data tracked by Mitch Brown, Huckins’ offensive game has room to grow, which is saying something since he’s already at a point-per-game pace. Huckins is really skilled at possessive entries, creating possessive exits and establishing a good strong forecheck. Tools that are useful and can help him develop into an effective future power forward.
There’s a lot to like about the package Huckins brings, but he did slip to the 3rd round for reasons. One problem sizable kids tend to have is skating, and Huckins is no exception. Jerome Berube of Hockey Prospects provided this assessment of Huckins’ game:

He’s a power forward with good hands and great shooting skills. Physically he’s still pretty raw but he can also play a bit of an agitator role on the ice at times. He does need to get stronger on his skates to be more effective in those one on one battles. I’d say his speed is one of the biggest areas he needs to work on to have success at the next level. His stride is choppy, the first few steps are not good enough at the moment but once he hit his top speed it’s fine but it takes too much time to reach that top speed. He gets away with it in junior but at the pro level and mostly in the NHL that will hurt him unless he makes significant progress. Also, he needs to be smarter on the ice, his decision-making is with his speed the biggest parts of his game that he needs to work on.

Ideally Huckins will expand on his ability to score in the QMJHL. A big step in production, as well as a step up in TOI is needed. While some of his teammates are moving on due to age, Acadie-Bathurst acquired Washington first-rounder Hendrix Lapierre to play on their roster. Lapierre has more skill and a better reputation so Huckins has now entered into a fight for ice time up the middle.
Riley Kidney and Lapierre will be slotted in ahead of Huckins on paper, this might cause him to shift into a winger. More skilled linemates could mean a bump in production, but Huckins is going to have to work this season to earn it. Should he take the step the team wants him too he could possibly earn himself an entry-level contract, but that will be up to him and his ability to put the work in.