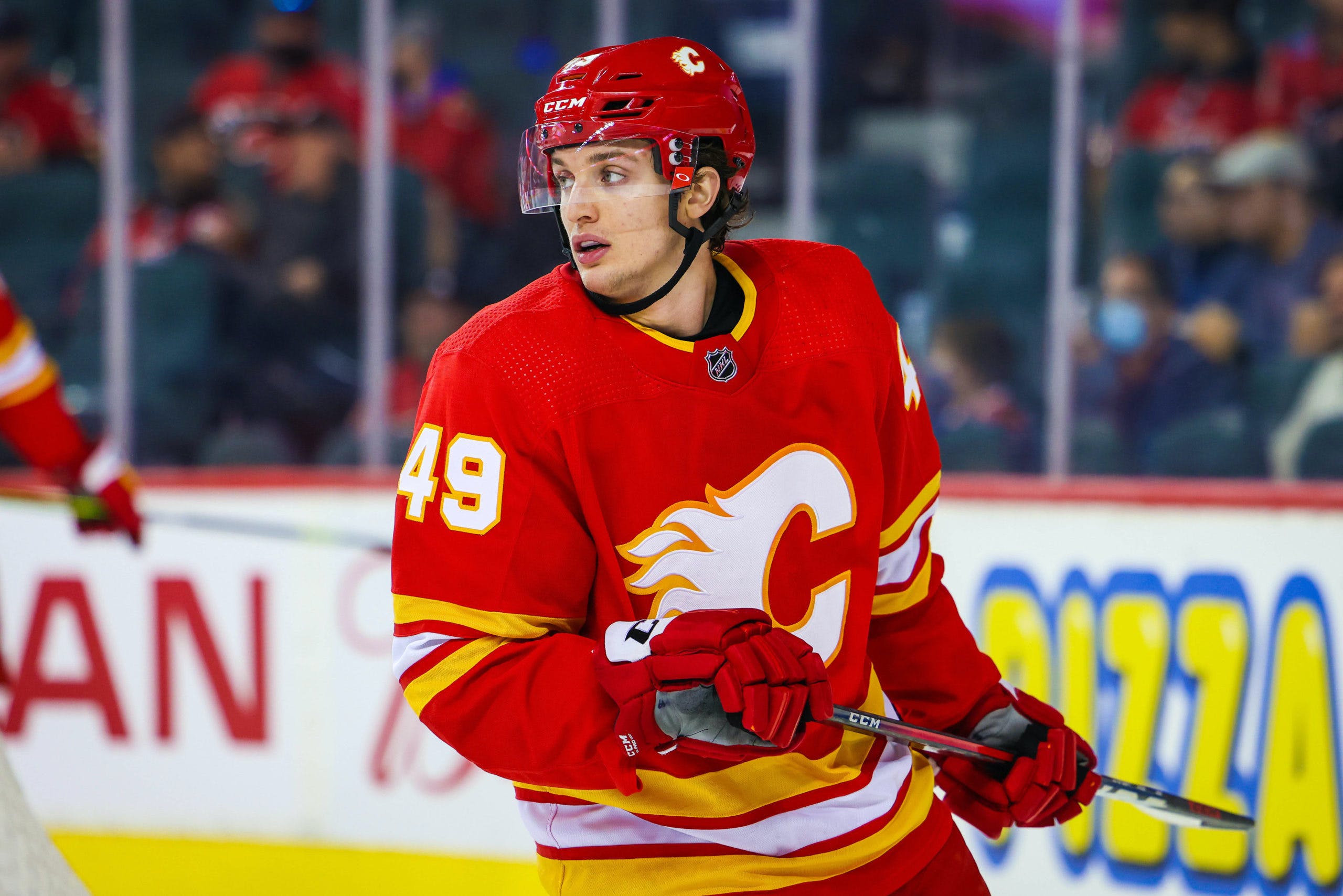 By Ryan Pike
7 months ago
This week, we’ve looked at the Calgary Flames positional prospect depth. They’re probably set in goal for now. They could probably use some defensive help.
And looking at their forwards: they might lack impact prospects, but they have a lot of promising players of different types and styles.

The most NHL-ready scoring forward the Flames have is definitely Adam Ruzicka, who spent just over half of the past season on the NHL roster (and played 28 games). He might not progress higher than the third line, but Ruzicka’s got size, mobility and smarts. The other player who’s close is Matthew Phillips, who has everything but size. But his lack of size feeds into concerns that he won’t be able to translate his AHL success into NHL success. (If nothing else, he’s great AHL depth and perhaps a trade chip.)
2021 first-rounder Matt Coronato had a superb season with Harvard in the NCAA, adapting well to the college game and emerging as one of the Crimson’s top players in a weird season where their best players disappeared for a few weeks for the Olympics. He’s a pure goal-scorer, but he’s rounding out his game, too, and Harvard used him in all sorts of different game situations.
Ontario Hockey League snipers Rory Kerins and Jack Beck round out this group. Neither are big, but neither are “Matthew Phillips small,” and both had fantastic offensive seasons. Because of Kerins’ age and that he finished second in the OHL in scoring (and didn’t look out of place in the AHL playoffs), he’s ahead of Beck in terms of progression. But both players are really promising.

The Flames have a bunch of forwards that aren’t “pure” scorers, but can be really useful players up and down a team’s line-up.
The top two guys in this category are likely Stockton rookies Jakob Pelletier and Connor Zary. Pelletier was awesome this past season, scoring with regularity and being named to the AHL’s All-Rookie Team. Zary had a challenging start to the season with an injury that upended his entire training camp process, but he worked his way into a key role for the Heat and was a key contributor during the playoff run. Both could have big roles in the Flames’ middle six in another season or two.
Stockton also saw Emilio Pettersen and Eetu Tuulola take steps. In prior seasons, Pettersen relied on his speed and Tuulola relied on his shot, but this season both seemed to take strides in rounding out their overall games. Both project more as complimentary pieces – neither is as complete as Pelletier or Zary – but both show potential and have been effective pros in Stockton.
After that, we get into the guys that are longer-term projects:

Finally, the Flames have a quartet of crashers and bangers.
Walker Duehr had a quietly good first pro season. He got an early season recall and played an NHL game. When he was in the AHL, he developed an identity as somebody that might not have oodles of pure skill, but he works his tail off and uses his size and speed effectively. (He might become a slightly lesser version of Garnet Hathaway.)
Martin Pospisil has everything but injury luck. The Slovak product is big, burly, effective with the puck and – as general manager Brad Treliving has quipped – “could find trouble in church.” But Pospisil’s had awful injury luck as a pro, and hasn’t yet played a full, injury-free season. He seems like a natural for NHL spot duty on the fourth line, at the very least, if only he could stay healthy.
Meanwhile, Czech signing Adam Klapka is joining the organization this fall. He’s massive and was an effective secondary scorer in the Czech Extraliga, which suggests he could do similar in the AHL next season. WHLer Lucas Ciona is probably another season or two away from going pro, but he has a lot of the same attributes as Pospisil – and hopefully, better injury luck.
In terms of forwards, the Flames could probably use impact players of every type, but they have a few interesting prospects in each category and they don’t really have massive pressing needs up front aside from a continuing desire to keep accumulating depth. (When in doubt, I would always recommend adding more potential scoring depth.)