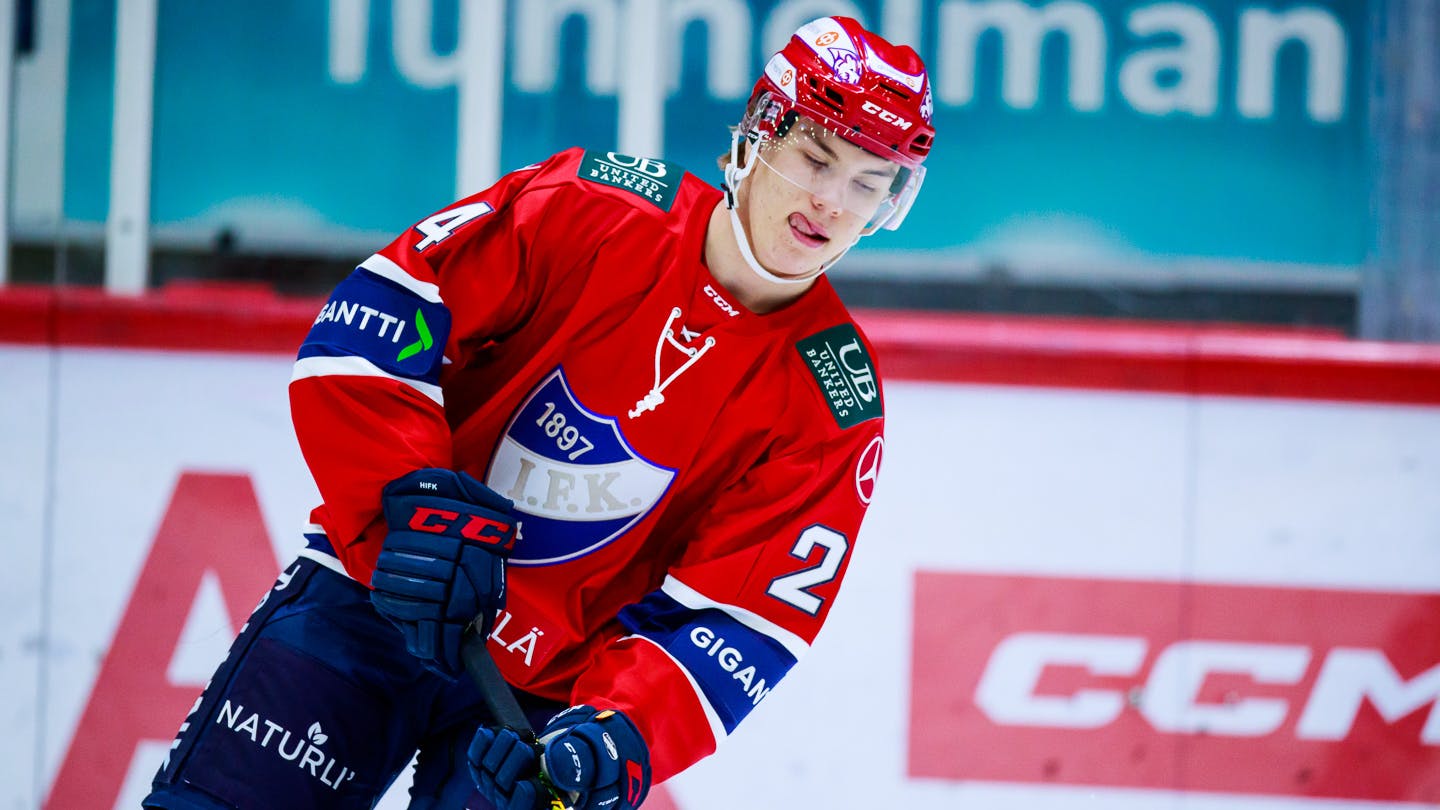 By Colton Davies
6 months ago
Over the last couple of decades, if not longer, Finland has been pumping out top-tier NHL talent. This draft will feature elite talents like Joakim Kemell and Brad Lambert headlining the Finnish prospects available. The last time the Flames targeted a Finnish prospect was when they drafted Jusso Valimaki in round one of the 2017 NHL Draft. The last time they took a player directly from Finland was Eetu Tuulola.
Up next is a player who took the Finnish junior league SM-sarja by storm: Aleksanteri Kaskimaki

While he possesses one of the most unique names in the draft, Kaskimaki also has a lot of skill. He hails from Espoo, Finland, which in recent years has produced the likes of Miro Heiskanen, and Anton Lundell, to name a couple. He is 6’0″, 196 lbs and possesses a solid frame. He came up through the Jokipojat program as a young kid and fought his way into the legendary HIFK program where he has made progress throughout the years. While he is not a household name like other Finnish prospects available, Kaskimaki managed to make himself widely known to scouts after helping guide Finland to a gold medal at the European Youth Olympic Festival. Kaskimaki is set to play in the U20 SM-sarja and the Liiga next season. He was not selected in the Canadian Hockey League (CHL) import draft.
Here’s Rasmus Tornqvist from FCHockey detailing a bit of Kaskimaki’s game during an international game:

Kaskimaki is an offensive-minded winger/center, who can use his speed to create his own scoring chances, but also dish the puck to his teammate when needed. His high-end speed was on display during this viewing, and I was very impressed with his ability to stickhandle at full speed. He was able to beat defenders with his skating on several occasions, thus creating dangerous scoring chances for both him and his teammates. His impressive offensive numbers this season has definitely boosted his draft stock a lot, and in my opinion, he is starting to look like a clear top-100 prospect. If he can work on his overall game and is able to keep producing consistently, he might be worthy of a pick close to the top-50, mostly because of his elite speed, which is a great asset in today’s game

Scott Wheeler from The Athletic had Kaskimaki ranked 61st:

All else equal, Kaskimäki probably ranks a few slots higher here. He was one of the top forwards in Finland’s junior league this year, getting whatever looks he wanted and often racking up double-digit single-game shot totals. He played on Finland’s top line (though he was definitely its third fiddle) at U18 worlds and looked comfortable with the puck in a pair of brief Liiga stints as well. His hands can really flash. When he gets an opportunity (whether that’s being left alone in the slot or a defender making a mistake), he’s got the skill to make plays. He’s strong for his size and works hard to be at the centre of the action. But he’s also one of those classic case studies where he’s really going to have to hit a lot of checkpoints to become an offensive case-use player and he’s probably not going to be a role player (even though he has been used in defensive/penalty killing minutes at times at lower levels).

I think Kaskimaki has higher-end playmaking ability with superior vision and quick-enough hands to make decisive plays with the pucks. He skates well enough, but I would not call it a strength. Kaskimaki makes very crafty plays with a high-end ability to scan the ice and find the best options.

Marco Bombino from the Finnish Junior Hockey site had this to say about Kaskimaki during a live viewing:

Kaskimäki made an impact on both sides of the puck. He was light on his skates. He kept his feet moving and had multiple takeaways. On his first goal, he stole the puck away, displayed quality puck control and outwaited the goalie before finishing patiently. He generated another scoring chance in the first period as he tried to score a between-the-legs goal, but the Ilves goalie was sharp and made a good save. He has situational toughness, and defenders need to be alert because he’s so quick to put pressure and force turnovers. He is a strong, smooth skater with a superb glide, and he changes direction well. Kaskimäki also put his shot on display in this game. He had a tricky and quick release on his wrist shot, and he could change the shooting angle. He finished the game with two goals and had a great performance on HIFK’s first line. He is versatile, energetic and can play any style of the game

So again, much like Tuulola, he’s another project player but someone who has a lot of upsides and the reward outweighs the risk. He has spent most of his career playing in the Finnish junior league and there are concerns about whether or not he can produce at the next level. While he did register one goal and one assist in four Liiga games this past year, the sample size is too small to dictate what he can contribute at the next level.

This past season, Kaskimaki played in the U20 SM-sarja and registered 40 points (19 goals, 21 assists) in 31 games. During the latter half of his season, he exploded into a point-per-game player. He’s evasive and deceptive, which not only makes him a dangerous playmaker but a shooting threat whenever he picks up the puck.
He also represented Finland at the IIHF U18 World Junior Championships this past spring where he had four points in six games and collected a bronze medal.

Kaskimaki would be a wonderful fit in the Flames system and is a player who they would be able to mould into a solid prospect. Unfortunately with the second round being loaded with teams holding mutliple picks, a team could be enticed enough by Kaskimaki’s package and grab him before the Flames.
Here is a snapshot of where Kaskimaki is ranked on various rankings:
NHL Central Scouting (Europe): 25th
Daily Faceoff: 72nd
The Athletic (Scott Wheeler): 61st
FC Hockey: 70th
TSN Craig Button: 64th
Smaht Scouting: 83rd
McKeen’s Hockey: 74th
Dobber Prospects: 93rd
Based on the rankings consensus, there’s a strong chance he’ll be available around 59th overall.