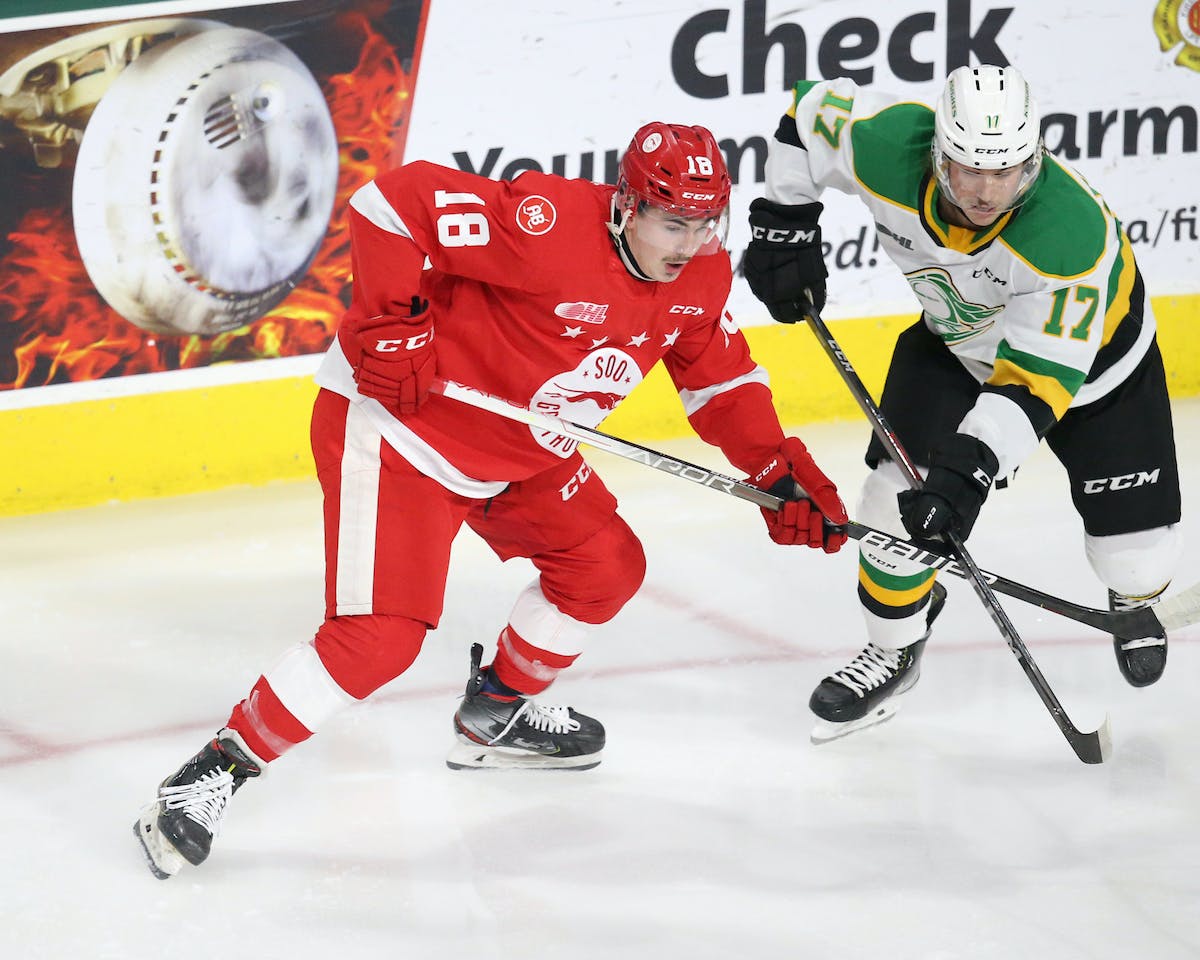 By Ryan Pike
4 months ago
Like a lot of teams, the Calgary Flames have their comfort zones when it comes to the NHL Draft. In recent years, they’ve had some success drafting players from the Ontario Hockey League. So with only a handful of picks in the 2022 draft, maybe they’ll skew towards their comfort zones?
Soo Greyhounds centre Bryce McConnell-Barker could be a good fit for the Flames at 59th overall.

A product of London, Ontario, McConnell-Barker is a left shot centre listed at 6’1″ and 194 pounds. He came up through local minor hockey in the London area, and was the fourth overall selection by the Greyhounds in the 2020 OHL Draft. His debut in major junior was delayed due to the pandemic wiping out the 2020-21 season.
Hadi Kalakeche of Dobber Prospects had this evaluation of McConnell-Barker’s rookie season in the OHL:

The 6-foot-1, 187-pound forward is almost always going full-throttle. That’s often a good thing, but can sometimes turn into a negative when the play requires a change of pace or a release of pressure. When it works, McConnell-Barker looks unstoppable, but he’ll occasionally chase down a play or try to push through bodies without much certainty or effectiveness. It’s a sign of tunnel-vision, something that’s rectifiable by video coaching. The foundations of McConnell-Barker’s game reside in his pace of play and his goal-scoring touch. He possesses a whippy, short release which is fairly well-masked and can beat netminders from short- to mid-range. He can also find and create seams pretty well. The overall package with this prospect is alluring, but some tweaks are required in order to maximize that top-six upside. With enough time and patience, though, it’s entirely possible, which makes McConnell-Barker a great second-round pick-up for a team looking to add some goals to their pipeline.

As part of the OHL Prospects site’s media scouting panel, Dominic Tiano of OHL Writers had this to say about McConnell-Barker:

I like McConnell-Barker. A lot. I believe that his role on the deep and older Soo Greyhounds squad doesn’t always put him in the best offensive situations and that his offensive numbers take a hit because of that. He is a well-rounded 200-foot player who is good on draws, you can trust in the defensive zone, is a very good skater and has an excellent shot. Here’s the thing: We’ve seen it a few times now where former Greyhounds produce playing a lesser role for the Greyhounds only to go on and have a hard time making it to the NHL. But as a mid to late second round pick, McConnell-Barker might be worth it.

His sample size in high-end hockey is a bit sparse due to the OHL not having a 2020-21 season, but what we’ve seen from him so far, he’s got a lot of talent and potential.

The Flames are definitely aware of McConnell-Barker and his skillset, given that he’s teammates with up-and-coming prospect Rory Kerins. And McConnell-Barker ticks a ton of boxes for the Flames: he’s a centre, he has decent size, he can score goals, and he has a lot of tools that he can continue to develop.
Will he be available at 59th overall? It seems probable. Here’s where he slots in on various draft rankings:
Daily Faceoff: 80th
FC Hockey: 67th
Elite Prospects: 67th
TSN (Bob McKenzie): 58th
TSN (Craig Button): 74th
The Athletic (Scott Wheeler): 57th
The Athletic (Corey Pronman): 47th
McKeen’s Hockey: 95th
Dobber Prospects: 68th
Smaht Scouting: 108th
Central Scouting: 34th (North American skaters)
Based on the consensus here, it feels likely that McConnell-Barker will be available at 59th overall.