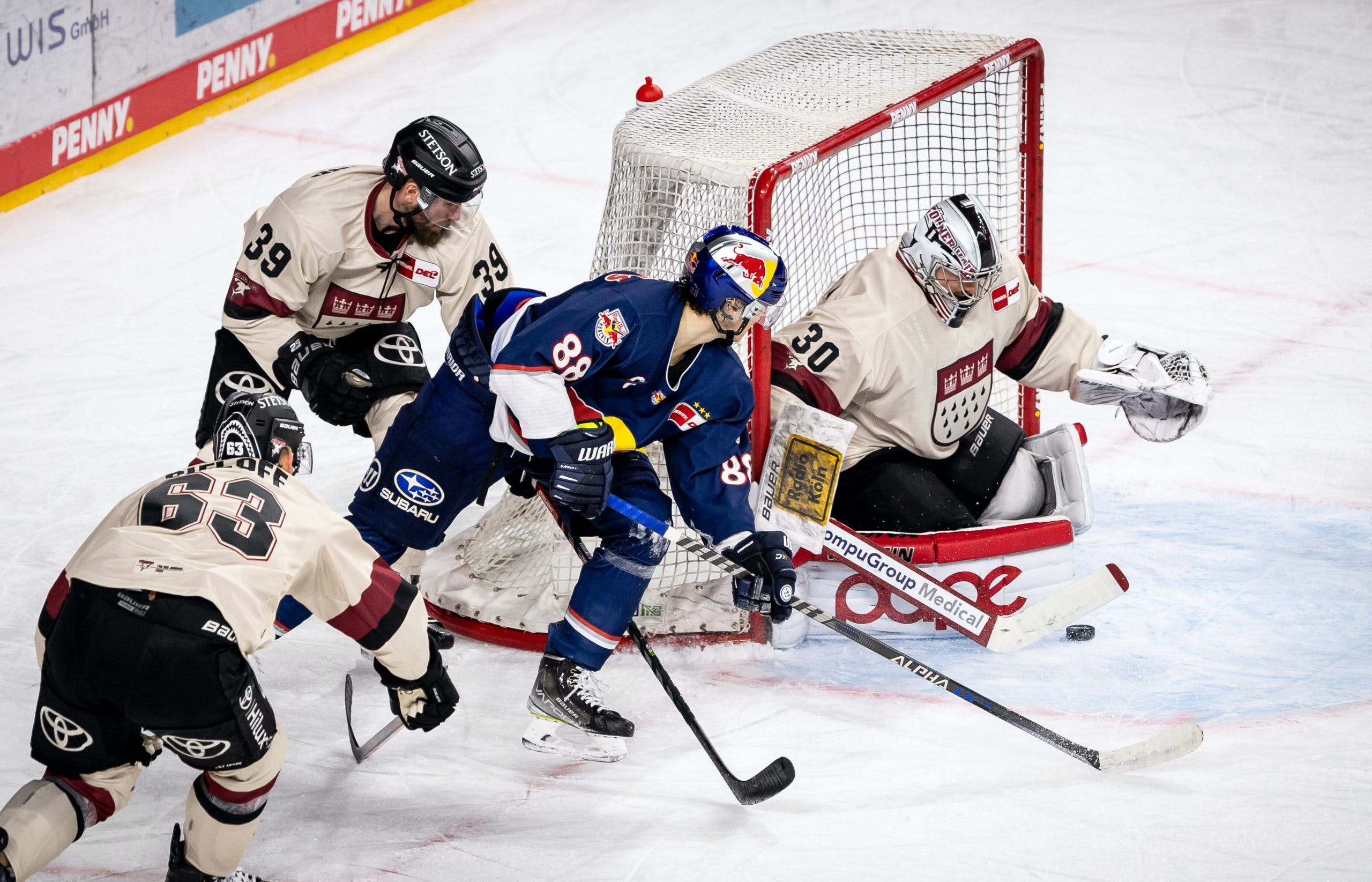 By Ryan Pike
7 months ago
If there’s one up-and-coming country in international hockey over the past decade, it’s Germany. They’ve produced such strong players as Leon Draisaitl and Moritz Seider in recent years. (We’re at the point now where Germany produces one or two really fun players per draft class.)
The big German name this season is winger Julian Lutz, who may be around when the Flames select in the late second round.

Lutz hails from Weingarten, a town in southern Germany. He’s a left shot winger listed at 6’2″ and 190 pounds.
After playing local youth hockey, Lutz was recruited by the prestigious RB Hockey Academy in scenic Salzburg, Austria, where he played from ages 12 to 16. Because of Lutz’s strong play, he’s been generally far younger than the age limit of the team he’s been playing on:
His 2021-22 season was… well, it was challenging. He played in the Hlinka Gretzky Cup, but was injured in the late summer – reportedly he fractured a bone in his back – and was out for seven months, finally debuting in the German top pro league, the DEL, in February. He played the last few months of the season, then represented Germany in the Under-18 World Championship.
Alex Appleyard of Smaht Scouting provided a succinct summary of why scouts are excited about Lutz:

His offensive game is built around three major aspects of his skill-set. Skating, seam-finding and spunk. The skating will be discusses in greater depth below, but he utilizes his skills in this area extremely effectively to create space for himself, using his edges and acceleration to be a menace both on and off the puck in the offensive zone. On the puck he can drive opponents crazy with tight turns combined with great puck-protection to create chances from either the walls or on the cycle, while off the puck he causes defensemen headaches all game long due to his ability to get into passing lanes, as well as capacity to pressure opponents without taking himself out of the play.

The knock on Lutz, per Appleyard, is that he’s just not great at anything, and his defensive game is fairly unimpressive.
Dobber Hockey’s Hadi Kalakeche had a similar summary of Lutz’s strengths:

A high motor and great skating foundations define Lutz’s game. He does a great job of hunting down puck-carriers and disrupting their attempts to skate the puck towards the offensive zone, while also being able to take his foot off the gas when the situation warrants it. He battles hard in front of the net, makes his stick available for deflections and rebounds, and is adept at gaining body positioning on his opponents. The main issue with Lutz is just a lack of pop in his game — his shot is OK, his passing is average, and his stickhandling is just good, but none of his puck skills stand out as remarkable tools that can be developed into above-average assets at the NHL level. I see Lutz as a versatile forward who can chip in defensively and pile up the occasional point, while manning a third line and a second power-play unit.

Based on the scouting report, Lutz feels like a useful player. His motor and skating are said to be excellent, but his defensive challenges and lack of remarkable offensive skills might be a hindrance to his development.

Lutz was limited to just 14 DEL games this season, all of them from February onward, due to his back injury. That said, he was one of just five under-18 players his league, one of just a pair who registered a point, and the only one who scored a goal or had multiple points.
Given the small sample size and the average age of his league, it’s hard not to be impressed by his performance.

Lutz feels pretty Flamesy, and his pace, skating and intangibles feel like something they’d really value. Their enthusiasm about him as a prospect would probably depend on how confident they are in their ability to work with him on his skills and defensive acumen.
He’s a likely second-rounder, though it’s a bit of a question mark whether he’s still around at 59th overall. Here’s a snapshot of where he’s ranked by various rankers.
Daily Faceoff: 58th
Elite Prospects: 37th
FC Hockey: 36th
McKeen’s Hockey: 52nd
TSN (Bob McKenzie): 49th
TSN (Craig Button): 34th
The Athletic (Scott Wheeler): 54th
The Athletic (Corey Pronman): 44th
Dobber Prospects: 69th
Draft Prospects Hockey: 63rd
Puck Authority: 54th
Smaht Scouting: 45th
Central Scouting: 30th (International skaters)
There’s a chance Lutz falls to 59th, but it’s not guaranteed. And if he does fall to 59th, he’s not a sure thing, but he’s a prospect with a lot of good attributes… but also with a few things that will need to improve for him to reach the NHL level.