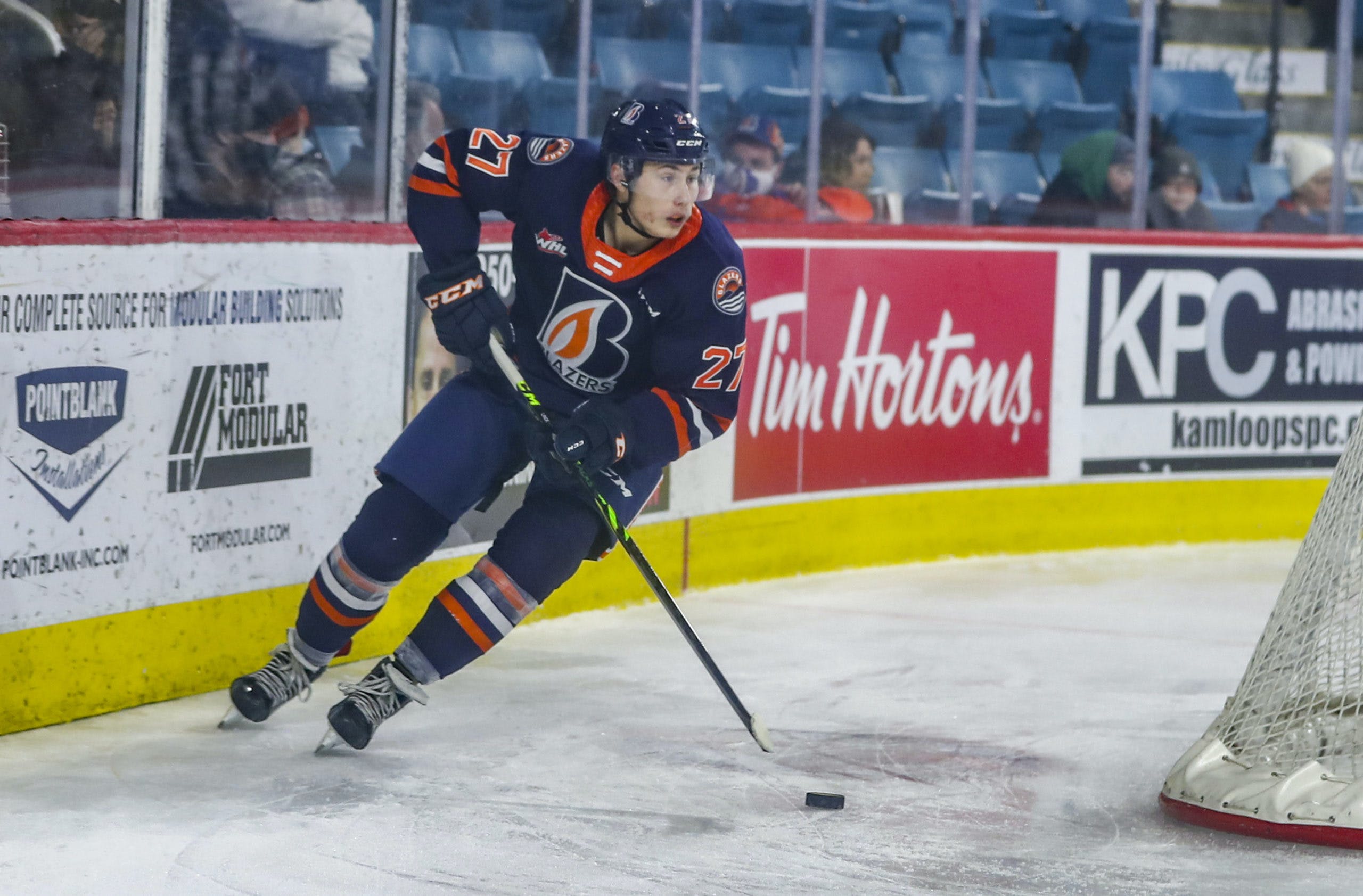 By Colton Davies
5 months ago
The second round of the 2022 NHL Draft will take place on July 8. The Calgary Flames hold the 59th overall selection in the second round, and there are a number of targets that could be available for them when they are back on the clock.
Up first, a Western Hockey League defenceman who has been playing for the 2023 Memorial Cup hosts, the Kamloops Blazers, and looks to be one of the smoothest skaters available in his draft class: Mats Lindgren

Mats Lindgren is the son of a former NHLer of the same name, Mats Lindgren. Lindgren was born in Vancouver, British Columbia and while he holds Canadian and Swedish citizenship, he represents Canada at the international level. Growing up, Lindgren was a star for the Burnaby Winter Club program, a top prep school in BC. His dominance was seen by many WHL scouts, and in the 2019 WHL Bantam Draft, he was selected 7th overall by the Blazers.
Last season was his first WHL season, unfortunately, due to the COVID-19 pandemic, the WHL was forced to create a 25-game schedule in order to fit public health orders. That took a toll on a number of players’ development, but through 22 games, Lindgren put up solid numbers and was showing great signs of progression already. The Blazers have a number of eligible players for this year’s NHL Draft but Lindgren looks to be the one who possesses the highest ceiling.
Over at Smaht Scouting, Matthew Somma breaks down why Lindgren is considered one of the top defensive prospects out of the WHL.

He possesses high levels of hockey sense and can anticipate where the puck will be going to next in order to put himself in a better position in the offensive zone. He can predict where teammates will be and can execute on his passes from the blue line. Lindgren’s vision in the offensive zone is up there with the best in the WHL, which bodes well for his odds of making it to the NHL. Lindgren’s on-ice vision gives him a competitive advantage over his opponents at times, allowing for his teammates to capitalize on his passes.
Lindgren’s next biggest advantage is his shifty skating. His top speed and acceleration are average or slightly above average at best, but where Lindgren excels is in his ability to skate himself out of trouble. He’s a slippery skater, able to turn a corner on a dime and gain separation from a defender in an instant, maintaining control of the puck in the process. It’s so incredibly hard to knock Lindgren off of the puck once he gets going.

Over at FC Hockey, Joel Henderson talks about how detailed Lindgren’s game is.

The debate on Lindgren begins with how refined and detailed his game is when thinking about transition and pinching in his decision-making. That same decision-making process will serve him well as he continues up levels. Contrast those details against how much more room for potential there is in a player who limits himself by his stance and how locked his hands are to his hips. His passing decisions and shot capacity relies on the agility and speed of his footwork rather than a growing athletic stance. To continue to improve his shot power and his passing predictability, he will have to move his hands away from his body more often and be more dynamic in motion. This would hopefully improve his shot power. Despite Lindgren being younger for this draft class, I wonder how much more physical growth and added details will skyrocket his upside. There is a lot to like about what he did in this game though.

Over at The Athletic, senior draft correspondent Scott Wheeler talks about why Lindgren is lethal in all three zones.

Lindgren plays the game the way it’s meant to be played. He uses movement to shape play in all three zones. In the defensive zone that looks like subtle little close-outs, an active stick, and the footwork and headiness required to absorb pressure and play past it (whether with a quick escape into a simple headman or something that appears as simple as a five-foot bump pass that he never screws up). In neutral ice, that looks like perfect timing and accuracy on his passes and carries (whether switching sides with an east-west pass or a carry through the guts of the ice and a pass on entry). In the offensive zone, it looks like clever puck management across the line and through seams as he manipulates structure with his feet. Lindgren plays the calm, cool, collected and mobile but not necessarily flashy game that we’re seeing more and more of out of the defenders his size who are breaking in (see: Scott Perunovich, Rasmus Sandin, Jordan Spence, etc.).

Lindgren has a lot of upside, and if the Flames can pick him up at 59th overall, he has the potential to become one of the steals of the draft. Already he has made quick strides in the WHL, and with the Blazers looking to load up next year for the 2023 Memorial Cup, Lindgren will be one defenceman who will be heavily depended on, especially as a third-year veteran. There are a number of defencemen available out of the WHL this year, top-prospects Kevin Korchinski of the Seattle Thunderbirds and Moose Jaw Warriors’ Denton Mateychuk highlight the class, but guys like Lindgren, Owen Pickering and Graham Sward are flying under the radar. It will be interesting to see who is available at the 59th selection.

Throughout 22 games last season, Lindgren registered 10 points, while he played a diminished role, Lindgren quickly proved to the Blazers coaching staff what his potential is. This past season, Lindgren played out a full WHL season. He registered 44 points in 68 games and found himself ranked 18th among WHL defencemen. He also played a crucial role on the power play, registering 15 power play assists, and tying for 7th league-wide. His point totals led him to be one of the top point producers on the Blazers this past year, he ranked 7th on the team, and second in the defence column only behind Quinn Schmiemann, who led the team with 54 points. His dominance also got him invited to the CHL/NHL top prospects game this past spring. As you can see, he is quickly adjusting and making progress.

As I mentioned before, this draft will be all over the place, if you have had a chance to take a peek at a handful of rankings through the industry,m you will fully understand what I mean. With that said, if the Flames can pickup Lindgren at the 59th overall selection, they have themselves a guy who will be able to quarterback a power play for years to come and can be an offensive defenceman you rely on. He has smooth edge work, he moves the puck with ease and is someone who can completely control and create a play.
Unfortunately, luck will have to be on the Flames’ side, as it’s already been reported a handful of teams are very interested in the second-generation Lindgren. Here’s a glance at where he lands on various rankings throughout the industry:
Daily Faceoff – 60th
TSN (Bob McKenzie) – 64th
TSN (Craig Button) – 62nd
The Athletic (Scott Wheeler) – 36th
The Athletic (Corey Pronman) – 41st
Future Considerations – 78th
NHL Central Scouting – 47th (North American skaters)
Elite Prospects – 82nd
Smaht Scouting – 63rd
Dobber Prospects – 39th