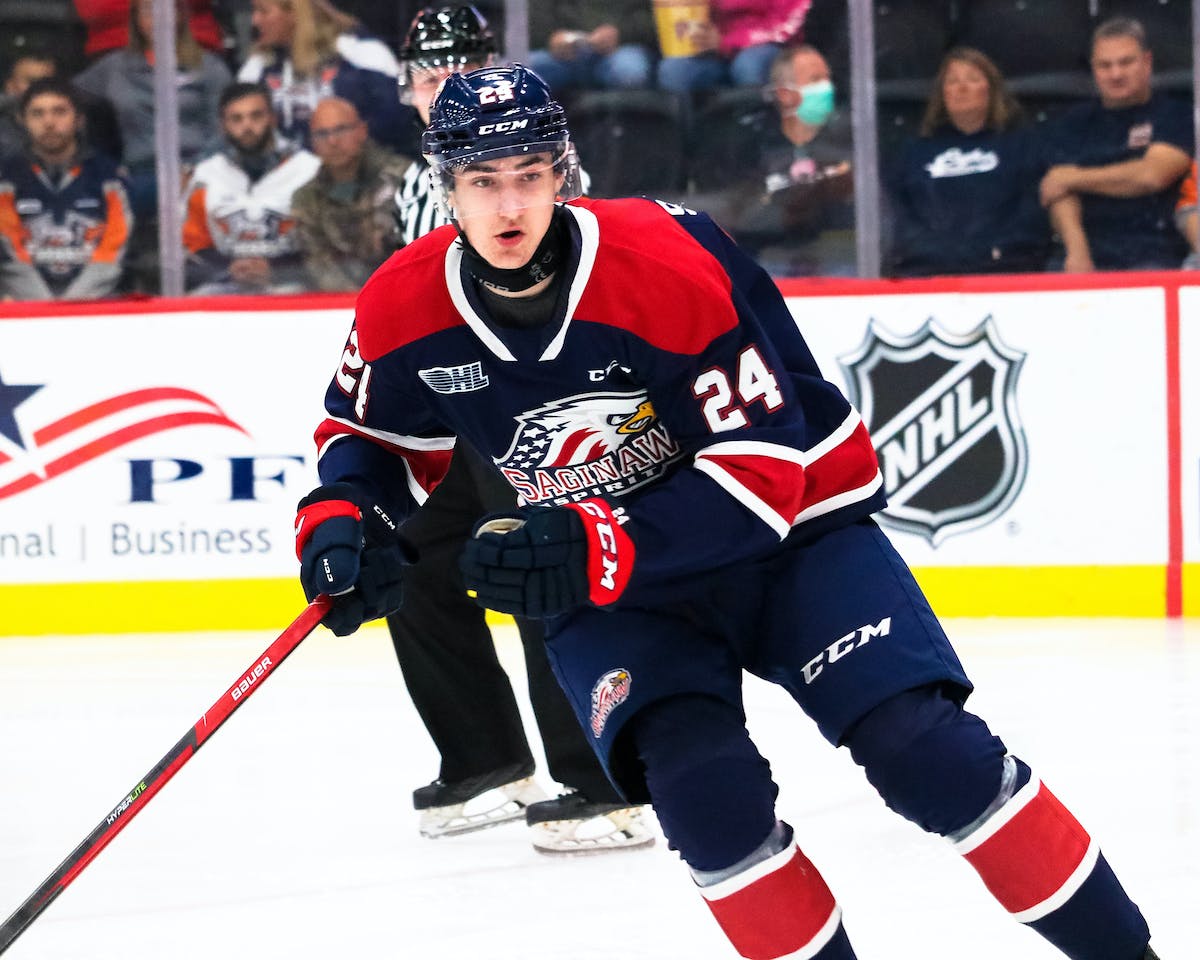 By Ryan Pike
6 months ago
One of the bigger missed opportunities in recent Calgary Flames history was the signing of Jaromir Jagr. (Jagr’s a legend, and it’s a shame things didn’t work out.) At the 2022 NHL Draft, the Flames could have a second chance of sorts in the form of a youngster from Jagr’s hometown.
Let’s dive into the latest second round target at 59th overall: Czech forward Matyas Sapovaliv.

A product of Kladno, Czechia – the same town as Jaromir Jagr – Sapovaliv is a left shot centre and winger listed at 6’3″ and 183 pounds.
He came up through the Rytiri Kladno system – the team Jagr owns – and frequently played against players far older than he was. He played under-16 hockey at 13 and 14. His 15-year-old season saw him spend time in under-17 and under-20 leagues. His 16-year-old season saw him ply his trade in the under-20 league, but he also made his pro debut and played 13 games in the second tier Czech league, the Czech 1.liga.
Sapovaliv was selected by the Saginaw Spirit in the 2021 CHL Import Draft and he made the move to North American hockey, spending 2021-22 in the OHL (when he wasn’t representing his country at the Hlinka Gretzky Cup or the Under-18 Worlds). He’s on the long list for Czechia’s entry for August’s rescheduled World Juniors in Edmonton.
Nick Richard of Dobber Prospects provided a succinct rundown of Sapovaliv’s game:

Sapovaliv has great size and knows how to use it in order to protect the puck in the offensive zone. He can slow the game down while possessing the puck along the boards, drawing defenders to him and keeping them on his back while creating space to find open teammates. He makes quick reads and keeps a mental snapshot of his surroundings, allowing him to facilitate and sustain possessions efficiently. On occasion, however, he can be a bit overconfident and hold onto the puck for too long or force a low-percentage pass and that is something he will have to manage better as he climbs the ranks and faces more formidable opponents.

He’s got good habits, he comes back all the way deep, helps his [defensemen]… And when he gets the puck, he transports the puck well up-ice, distributes the puck well to both sides, on his forehand or his backhand. Puts his wingers in good situations. He’s got very soft hands. For a big guy (6-foot-3, 182 pounds) like that he’s got soft hands, makes really smart plays with the puck. Can feather passes, good playmaking ability. When he gets the puck in the house there, I’ve seen him rip it. He’s got a really good shot, goal scoring ability as well… For a guy like that, the size, skill, hockey IQ, and just the fact that … a lot of Europeans you don’t know what you’re going to get with them coming over because it is a big jump, it is a big adjustment. Some highs and lows, but he’s a guy that was very consistent this year.

Over at OHL Prospects, their media scouting panel listed Sapovaliv as the 8th-best draft eligible OHLer and Brock Otten had this breakdown:

I’ve been on the Sapovaliv hype train all season long. I don’t love how he finished the year, but I still really like the raw package of size, skill, and sense. He has the potential to be a very effective two-way center who can play through the middle of an NHL lineup. Two things are key to his development IMO. The first is his continued improvement as a mover. A bit Bambi-like at times, his four way agility has improved already, but further growth is required there and in his first step quickness. The second is his physical intensity level. He’s a big kid, but he’s slight. He needs to be more than just a stick on puck defender in his own end. His reach is really impressive, but he’d be even more effective if he engaged with his body. Additionally, he can be kept to the perimeter too often and he needs to find his way to the net with more consistency; he needs to be ready to battle and take a hit to make a play. Urgency is a word I would use. But I think he’s a top 40 pick this year.

Sapovaliv has only played one season in North America, so scouts may not have a clear picture of his progression. But he’s got a lot of good, raw tools, and he seems like he could be a good potential investment.

In his first North American season, Sapovaliv had 18 goals and 52 points in 68 games for Saginaw. He was fourth on the Spirit in scoring.
52 points was fourth among all rookies in the OHL. 18 goals was 16th among all rookies in the OHL. 32 even strength points was tied for 15th among OHL rookies.
Sapovaliv had three points in the Under-18 Worlds (tied for fifth on Czechia) and four points at the Hlinka Gretzky Cup (tied for first on Czechia).

The Flames have drafted from the OHL a bunch in recent years – with some nice successes – and a toolsy, versatile forward with a lot of potential seems like something they would covet, depending on what else is out there at 59th overall. He’s a bit of a project, but he seems like he would have value.
Here’s a quick tour around where Sapovaliv falls on the major rankings:
Daily Faceoff: 51st
FC Hockey: 46th
Dobber Prospects: 64th
Elite Prospects: 76th
TSN (Bob McKenzie): 46th
TSN (Craig Button): 54th
The Athletic (Scott Wheeler): 60th
The Hockey News (Ryan Kennedy): 60th
Smaht Scouting: 50th
McKeen’s Hockey: 44th
Central Scouting: 23rd (North American skaters)
He seems likely to be selected somewhere in the 50s. There’s no guarantee that he falls to 59th overall, but if he does, he seems like a prudent pick.