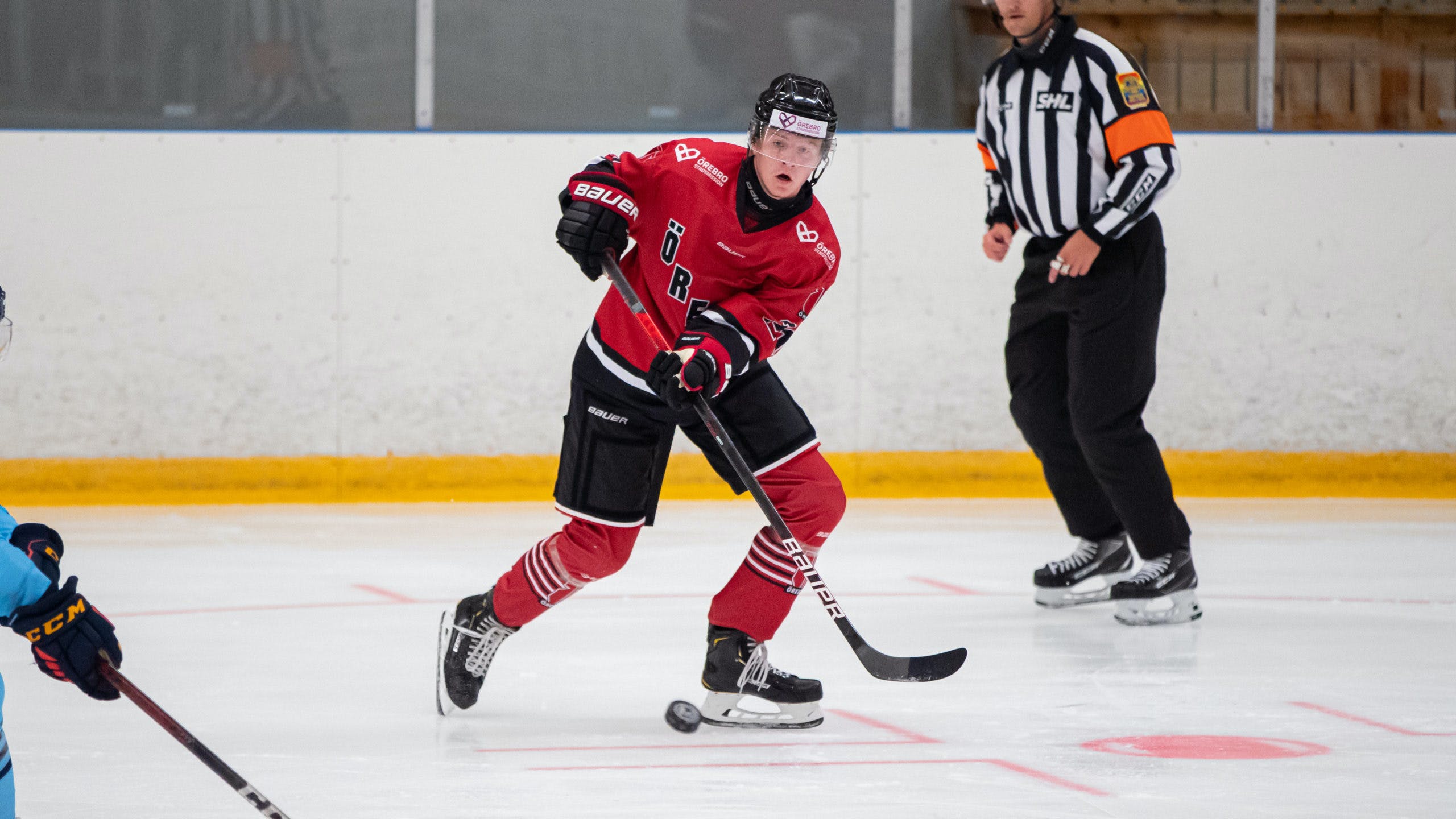 By Ryan Pike
5 months ago
When it comes to player preferences, many hockey clubs are creatures of habit – and the Calgary Flames are no exception. The Flames have had a lot of success with Swedish players in their history, and with their need for blueliners it might not be surprising if they selected a Swedish defender.
Junior standout Simon Forsmark may be a good fit for their preferences and need at 59th overall.

Forsmark is a left shot blueliner listed at 6’2″ and 194 pounds. He’s a product of Kumla, Sweden, just outside of Orebro, and is an October 2003 birthday. (He’s one of the older first-time eligible prospects in the upcoming draft class.)
Forsmark worked his way up through the local system in his hometown, then moved to Orebro’s system in 2017-18 as a 14-year-old. He’s worked his way up through their pipeline, debuting as a pro in 2020-21 as a 17-year-old with five games in the SHL and 11 in the third tier HockeyEttan.
After bouncing around a bunch in 2020-21, Forsmark got some stability this past season. He split the season between Orebro’s junior team in the J20 Nationell league, and their pro team in the SHL.
Writing mid-season, Dobber Prospect’s Alexa Potack had this assessment of Forsmark:

At the professional level, Forsmark has struggled to produce offense so far but he is engaged in offensive play through zone entries and his positioning in the offensive zone. He occasionally has seemed overwhelmed in the defensive end by the quicker and stronger competition at the men’s level, however. He primarily needs to work on his defensive positioning and speed in order to adapt to a step up in competition. One upside to Forsmark’s defensive play in the SHL is his physicality. While not overly physical, he uses his body wisely and is effective in boxing out opposing forward when defending the net-front area. Forsmark is a highly touted prospect for the upcoming draft, who many consider a top-40 pick. If his offensive skills begin to translate in the SHL and he continues his reliable transitional play, he could emerge as a potential first-round talent.

I don’t think Simon Forsmark is getting the love that he deserves. He’s an extremely mature defender, a strong two-way presence. Forsmark is strong defending the rush, leading with his stick and angling out into the boards with ease. He’s a takeaway machine, forcing turnovers with regularity and quickly turning it back up the ice. It seems that any puck around him, on a stick or not, seems to end up on his stick.
Forsmark’s hands look to be fairly slow but his feet and playmaking make up for this. He likely won’t be a player to carry it himself in transition but can distribute it out very well. Forsmark will need to build some strength, as it does look to be an issue at the SHL level, but that will come with development. You should give him another look and bump him up in your rankings.

Over at Daily Faceoff, draft guru Chris Peters had him ranked 50th:

To be a teenager playing a regular shift for a pro team in Sweden says a lot, especially on the blueline. Forsmark appeared in 41 games for Orebro’s pro side, averaging nearly 10 minutes of ice time per game. He only had three assists in the pros but showed much more offensive prowess at the U20 level. He averaged better than a point per game there and showed a skill level that he just couldn’t at the pro level. He has good size and solid puck skills and defends extremely well. The maturity of his game is a big selling point despite his skating only being OK.

The consensus seems to be that Forsmark has a pretty balanced game. He’s been able to show his skills well in junior, but they haven’t yet translated to the pro level yet. (But he played a good amount in the SHL, and the hope is likely that his offence will emerge as he physically matures.)

Forsmark had three points in 41 SHL games and 27 points in 23 J20 Nationell games.
He was fourth among all under-19 players in games played in the SHL, trailing only Blues prospect Simon Robertsson, 2022 top prospect Marco Kasper, and Red Wings prospect Simon Edvinsson. He was second in the league in games played among under-19 defenders. He was 10th in points among the under-19 set, fourth among under-19 defenders.
He was 12th among all J20 Nationell defencemen in points, and led in production on a points-per-game basis among J20 blueliners that played 10 or more games. He was named the league’s top defenceman for his efforts.

He’s Swedish! He’s a defenceman! He basically feels like he’s already a Flames pick, doesn’t he? But will Forsmark be available when the Flames pick? Well… there’s a chance.
Here’s our snapshot of where he sits on a few different rankings:
Daily Faceoff: 56th
Elite Prospects: 60th
FC Hockey: 50th
Central Scouting (International skaters): 33rd
TSN (Bob McKenzie): 70th
TSN (Craig Button): 84th
The Athletic (Scott Wheeler): 35th
The Athletic (Corey Pronman): 55th
McKeen’s Hockey: 68th
Dobber Prospects: 53rd
Smaht Scouting: 61st
Puck Authority: 37th
Recruit Scouting: 80th
In short: Forsmark generally appears to be a solid late second round pick, though a few rankings – we see you there Scott Wheeler and Puck Authority – have him just a smidge outside the first round mix. If he’s around when the Flames select, he seems like a really good fit for their tendencies and needs.