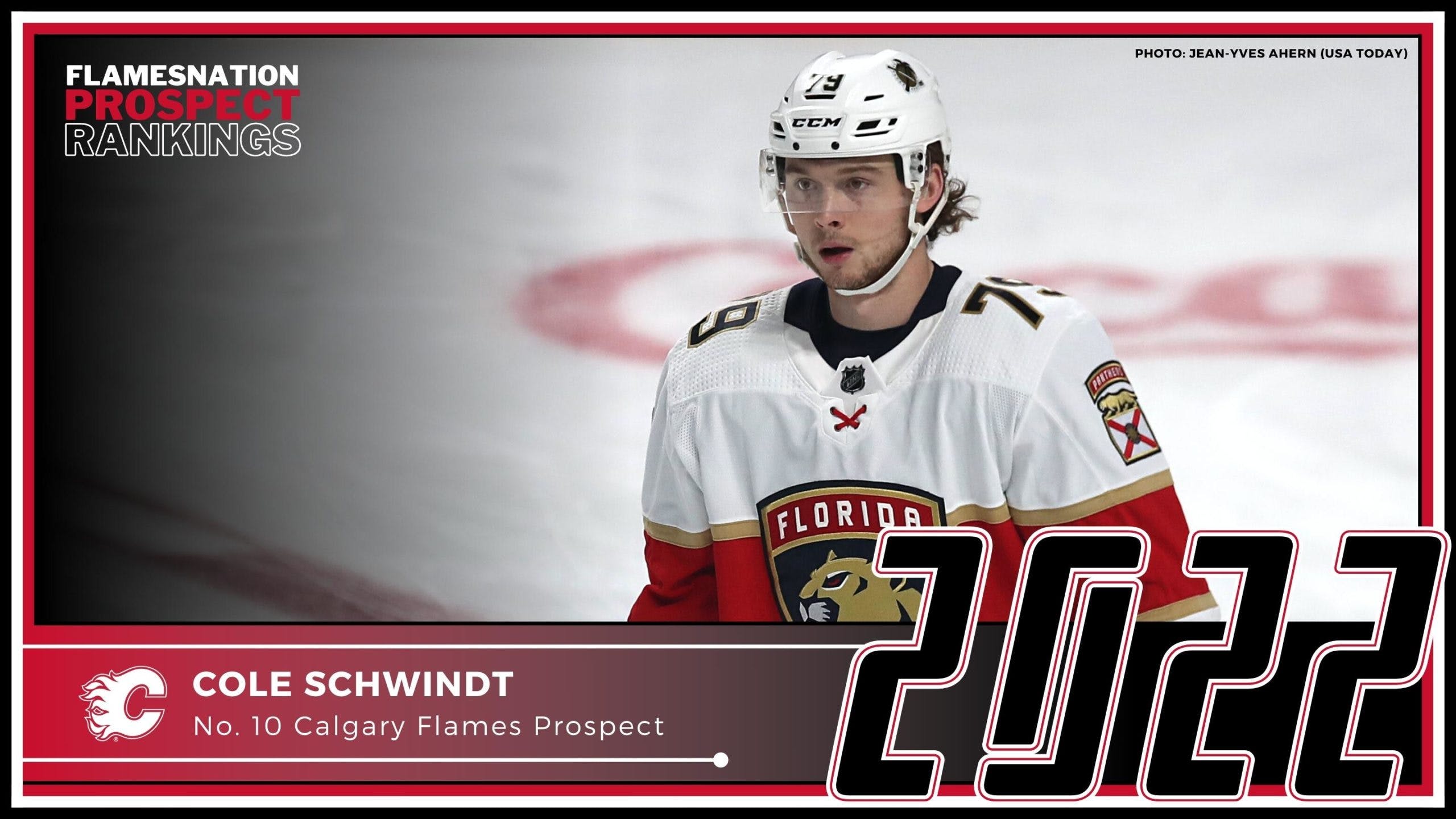 By Shane Stevenson
3 months ago
You may recognize his name from being included in the return of the Matthew Tkachuk trade, but make no mistake: Cole Schwindt wasn’t just some throw-in. A certified NHL prospect in his own right, Schwindt comes in at #10 on the 2022 FlamesNation Prospect Rankings.
Drafted in the third round of the 2019 NHL Draft (81st overall) by the Florida Panthers, Schwindt has continued to grow as a player at a fairly higher rate than many third round picks tend to. His junior team was the Mississauga Steelheads of the Ontario Hockey League.
Cole Schwindt
Right-handed winger/centre
Born Apr. 25, 2001 (Age 21) in Breslau, Ontario
6’2”, 182 pounds
Selected in the third round (81st overall) by FLA in the 2019 NHL Draft
Traded to CGY with Jonathan Huberdeau, MacKenzie Weegar and conditional 2025 first round pick in exchange for Matthew Tkachuk

Schwindt wasn’t immediately a huge scorer upon entering the OHL, but stuck around because of a strong sense of positioning. You can teach a player better ways to skate or how to grow stronger muscles, but it’s almost impossible to teach the natural ability of knowing where to be on the ice.
When you tend to be in the right spot the puck tends to go in the right direction for you more often than not.
His draft year never really saw him spike either – only mustering 49 points in 68 games. He had limited games with current NHL players Ryan McLeod (EDM) and Owen Tippett (PHI) up front and a whole season with Thomas Harley (DAL) on defence. Outside of that he didn’t have much of a high-end supporting cast to help him produce.
The positive of that lack of surrounding talent meant Schwindt was given plenty of ice time to which he continued to grow his game. Just three seasons later Schwindt established himself in the AHL as a top-6 forward option in the Panthers system. As is the case with a lot of young players Schwindt lost most of a developmental season to the COVID stoppages. In 2020-21 he only was able to get into 10 games with the Syracuse Crunch (as a 19-year-old who was allowed to play in the AHL due to the OHL season cancellation). The following season is where he made his mark.
One of the best things that Schwindt was able to develop in his OHL days that he brought to the AHL was an improved shot. It’s not a natural beamer like Ovechkin or Matthews, but it’s nothing to scoff at. He uses his instinctive abilities to find open space and gets off a fairly powerful attempt with good accuracy.
Another benefit is his ability to read players off the rush. When coming through the neutral zone he can recognize time and space a few seconds before it opens up which helps him enter the attacking zone with possession. Anytime the puck stays on your teams stick instead of the oppositions it’s typically a net positive. One of the best players in the league at maintaining puck possession is – believe it or not – Nazem Kadri. A player Cole Schwindt will be able to learn a lot from in the coming years.
Here’s a couple plays showing him going through the neutral zone.
He capped off the year by making his NHL debut with the Panthers – getting three games in without hitting the scoresheet.
Todd Little of Litter Box Cats wrote:

Schwindt is an intriguing, well-rounded, versatile two way forward who is solid in all three zones. He has a good frame, is physical and possesses all of the intangibles needed to be a NHL level player, despite some concerns about his skating.

He noted that Schwindt might need a bit more AHL refinement to be ready for NHL duty, but he had a good rookie season with Charlotte.

Schwindt brings something to the Calgary Wranglers they don’t have too much of outside Matthew Phillips – skilled right shot forwards. In an organization littered with left shots Schwindt holding his stick the other way is an instant advantage. Some may not like that, but it’s a reality of the situation.
Schwindt doesn’t need to be rushed into the NHL either – the main roster has a bevy of skill thanks to the shrewd work by their fantastic GM this offseason. How Schwindt plays could afford him some looks on the fourth line if need be as well. Not every player is built for Darryl Sutter’s fourth line and what he expects of them (i.e., Pelletier, Zary, etc.), but Schwindt and his naturally built-in instincts would fare just fine – in my opinion anyways. He’s shown third line potential and is currently on track to be an everyday NHL player.
I would not be shocked to see Schwindt play multiple games for the Flames as early as this coming season – nor would I be surprised to see him get a regular role within the next few years. He’s got a high hockey IQ and a drive to keep learning more – a fantastic get and add for the Flames organization.