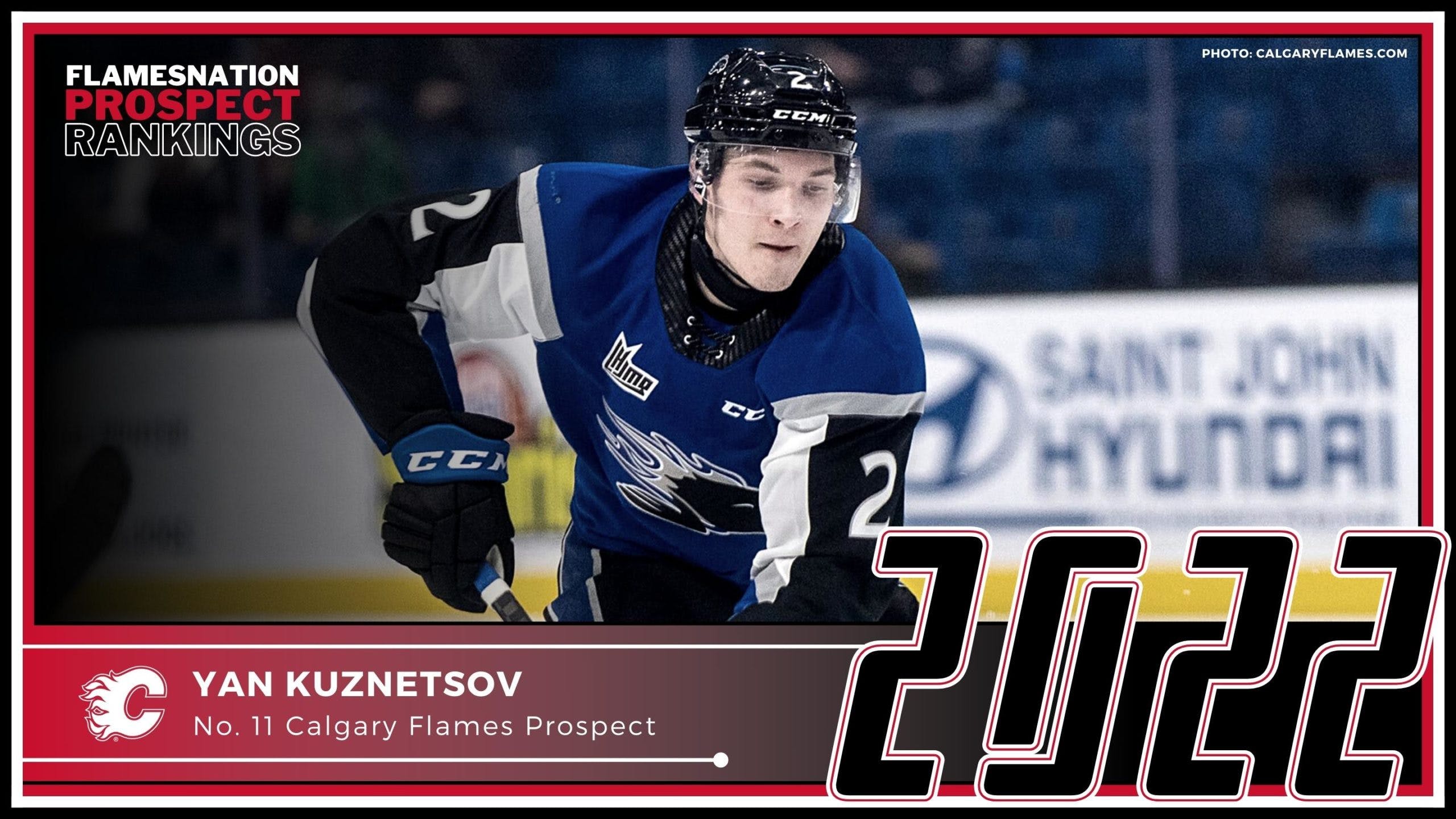 By Ryan Pike
3 months ago
Over the past several years, the Calgary Flames have tried to diversify their prospect portfolio by selecting a lot of different types of players from different leagues around the hockey world. Seemingly the idea is that the Flames will have different players ready to fill different niches throughout their lineup.
Arguably their shutdown defender in waiting is Yan Kuznetsov, the 11th-ranked prospect on this year’s ranking.
Yan Kuznetsov
Left-handed defenceman
Born Mar. 9, 2002 (Age 20) in Murmansk, Russia
6’4”, 209 pounds
Selected in the second round (50th overall) by CGY in the 2020 NHL draft
Kuznetsov has a gloriously weird hockey resume.
Originally from Murmansk, Russia – a spot in northwest Russia close to Scandinavia – he relocated to Moscow in his youth and worked his way up through CSKA Moscow’s youth hockey infrastructure. He made the leap to North America in 2018 (as a 16-year-old), moving to the United States Hockey League’s Sioux Falls Stampede and committing to the University of Connecticut.
After a season spent in the NCAA as a young freshman – he turned 18 in the March of his freshman season – he was selected by the Flames in the second round, 50th overall, of the 2020 NHL Draft. He played one more season in the NCAA, then signed an entry-level deal with the Flames at the conclusion of his sophomore season.
Since signing with the Flames, Kuznetsov has bounced around a lot. He played six games with Stockton at the tail-end of the 2020-21, and was fine, but hardly stood out. The following season, he played in 12 more games with Stockton but again didn’t really grab hold of a spot. However, the Quebec Major Junior Hockey League’s Saint John Sea Dogs, looking to load up for a Memorial Cup run, selected Kuznetsov in the CHL Import Draft. Since the Flames had too many defenders in Stockton and wanted to give Kuznetsov a chance to play a lot, they agreed to loan the youngster to the Sea Dogs for the remainder of the season.
Playing primarily with fellow Flames prospect Jeremie Poirier, Kuzetnsov had two goals and 13 points in 25 games. The hope behind pairing them together was likely that Poirier’s offensive touch would rub off on Kuznetsov, while Kuznetsov would help Poirier become a better defensive player. The results were mixed.
We consulted with Jerome Berube, a Director of Scouting for HockeyProspect.com and someone who knows the QMJHL quite well, on how Kuznetsov’s season with the Sea Dogs went:

Kuznetsov, his season was fine, I don’t think the QMJHL was the best place for him [to be honest]. I think playing NCAA and even WHL would have been better for him. Big shutdown physical D-men in the Q… they don’t tend to thrive in the league unless they have some offensive upside and Kuznetsov doesn’t have that offensive side.
He’s a shutdown D, he has the size, skating ability, and mental game to thrive at the pro level as a shutdown / stay-at-home D.
He needs to be more efficient at moving pucks, moving it more quickly. He won’t ever be a PP guy but if he can help his team transition game with a solid first pass that would be a big bonus for him.

Kuznetsov played pro hockey in his 18 and 19-year-old seasons, racking up 18 AHL games as a teenager. He was a fairly unremarkable pro defender during his teens. That’s not unusual. You’re playing against fully-grown men in the AHL and even as a big-bodied player, it can be tough to perform well.
The good news for Kuznetsov is he’ll likely have stability in 2022-23, as he’s likely earmarked for the AHL’s Calgary Wranglers – he’s technically able to return to the QMJHL as an overager, but his ELC is running regardless of where he plays so it seems likely he’s going to be playing full-time pro. After being at college, and then splitting a season between Stockton and Saint John, he’ll be located in Calgary and have constant exposure to the Flames’ development staff and facilities. That could be huge for somebody who’s as raw as he is, as the Flames can more actively work on his development than they’ve been able to in the past.
That said, Kuznetsov could still face challenges because of the sheer number of defensive bodies slated for the Wranglers. Assuming the Flames keep seven on the NHL roster, that would leave 11 blueliners between NHL and AHL contracts headed for the minors. Kuznetsov will need to find a niche and some regular ice time early in the season, or he might get lost in the shuffle.
Suffice it to say, it’s a pivotal season in his development.