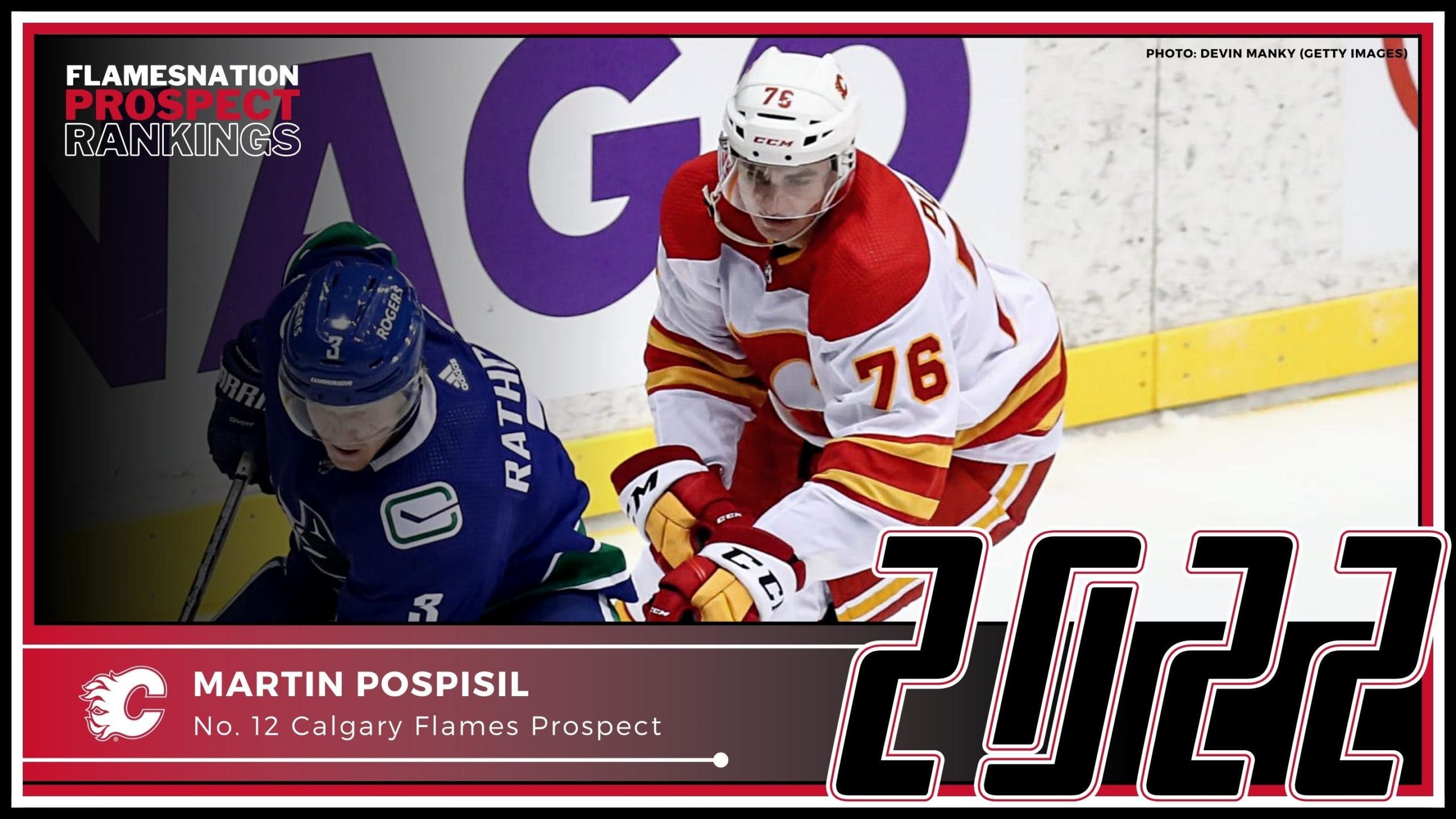 By Paige Siewert
3 months ago
Martin Pospisil had a breakout season in 2021-22, putting him at number 12 in the FlamesNation prospect rankings. Pospisil has played three complete seasons with the Stockton Heat and is set to enter his fourth with the Calgary Wranglers this fall. He has had his share of injury setbacks throughout the years but despite that, he earned a personal professional season best in games played and points this past year.
Pospisil is 12th in this year’s rankings.
Martin Pospisil
Left-handed winger
Born Nov. 19, 1999 (Age 22) in Zvolen, Slovakia
6’2”, 194 pounds
Selected in the fourth round (105 overall) by CGY in the 2018 NHL draft
Pospisil had a great season with the Heat, being very dynamic in his positioning and depth in the lineup. When call-ups happened, he was a natural substitute. If he was off or injured, another teammate would be able to take his place. Part of the success the Heat had was due to their depth and dynamic position players. Pospisil played with pretty much everyone getting games in with Jakob Pelletier and Matthew Phillips and more regularly on the second line with Justin Kirkland and Luke Philp.
Last year in 47 games with the Heat, he earned seven goals and 18 assists for a total of 25 points. In the playoffs, he earned another six points with two goals and four assists. He was recognized especially for his postseason efforts by his head coach.
Here’s what Mitch Love had to say about Pospisil.

You know what, he was one of our best players in the playoffs. And I think that was something that in our exit meetings at the end of the year, we really tried to hit home with Martin was just that’s the way you have to play all the time. Again, playoffs is a different level, but during the regular season you gotta have that consistency. And obviously in his case, he’s had a lot of injury problems over the last three years. It’s something that he’ll hopefully, knock on wood, have better luck with this year. But he’s a guy, he’s a unique skill set. He’s a guy that can make plays. He’s physical. He gets under your skin with his opponents. And really at the end of the day you can kind of play him all over the place, you can play him on right wing, left wing. I think it’s another guy, if he’s having a big off-season right now, the organization’s excited about and will continue to watch his development.

Talent also runs in the family. His brother, Kristian had a very impressive season for himself. He was selected to represent Slovakia in the 2022 Beijing Olympics and brought home the first medal for his country in ice hockey with a bronze. It was a large topic of conversation for Martin for the weeks following and he shared his pride in his brother’s accomplishments.

Assuming he stays healthy, I wouldn’t expect Pospisil to skip a beat. He’s playing with a lot of the same guys and has years of experience with the team to make him more of a veteran presence. He saw his linemates depart in the off-season so he will need to find a new placement in the lineup to be successful. He will produce at a high pace if he continues to elevate his game to the talent of his teammates.
Pospisil signed a one-year contract extension earlier this month and will have a chance to get some eyes on him at Flames training camp in the coming weeks. He could see some time in the NHL if the timing and scenario are right. There are a few of his teammates higher in the pecking order but he is not completely out of the conversation when it comes to AHL call-ups. This year could prove to be the year he gets more on the Flames’ radar or departs like his linemates this time next year and tries his shot at NHL hopes with another club.
Pospisil will join the Calgary Wranglers this fall for his fourth season with a Flames-affiliated team.